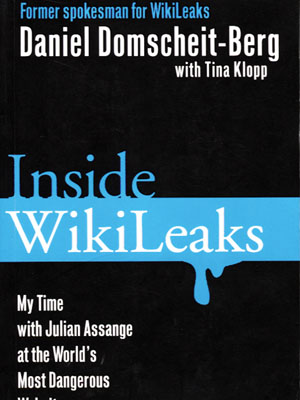 It was with considerable scepticism that I picked up Inside WikiLeaks — My Time with Julian Assange at the World’s Most Dangerous Website to read. Going by its blurb, I figured it belonged to the dubious genre of books in which disgruntled employees, after losing out in the power struggles at the organisations, came out and wrote ‘exposés’ about their former bosses. These were the people that were part of the system till yesterday and in any case, who is interested in their one-sided version of some obscure quarrels that don’t matter any longer?

But Inside WikiLeaks turned out to be a completely different proposition. Its author and former spokesman for the whistleblower Web site, Daniel Domscheit-Berg, doesn’t really succeed in making the reader share his anger and sense of persecution the way Lee Iacocca did in his autobiography or John Perkins did in Confessions of an Economic Hit Man. On roughly half the occasions that Domscheit-Berg cribs about the bitter events that tore WikiLeaks apart, I ended up sympathising not with him but his adversaries. Surely he didn't expect his little mutinies like shutting down computers would endear him to Assange?

But the beauty of Inside WikiLeaks lies elsewhere. It is the first insider account of how the world’s most unruly and irrepressible Internet phenomenon took shape; how a couple of anarchist, homeless hackers without a decent computer server made the world’s mightiest governments feel enraged and helpless; and how the coming of money into this pauper Web site destroyed loyalties and created infighting; how it all came to be done and undone.

But the best passages of the book are those dealing with a personal sketch of the idiosyncratic founder of WikiLeaks, Julian Assange. The year 2010 was a roller-coaster ride for this Australian, who had started it with his high-profile exposes — such as the 'Collateral Murder’ video that showed Allied forces shooting innocent civilians and journalists in Iraq — only to end it being accused of double rape.

Lionised as he is in popular imagination, Assange is nevertheless a heavily disorganised drifter who expects others to take care of him all the time, the book claims. He once borrowed the author’s jacket because he was going to write a formal document and needed to wear something to reflect that mood. And he went to sleep in that jacket.

Otherwise, he lived in no single place, stuck to no single woman, ate with his hands and wiped them in his olive-green cargo pants. He also firmly believed that WikiLeaks was about to get the Nobel Prize.

This was the Assange that the author came to like and accept. But as time passed, Assange grew distant, less tolerant of criticism and began keeping things from his colleagues. In particular, he refused to be transparent about the donations that WikiLeaks was getting or the deals he was striking with journalists.

I found the first half of the book more riveting than the second because it deals with the birth pangs of a startup that was out to change the world and how a bunch of egoistic nomads learned to work together. Domscheit-Berg doesn’t fail to detail his and Assange’s failures too. They pretended to the world that they had a large staff and an army of volunteers working in various departments even though the two were the only people in the project (They wrote under multiple pseudonyms).

Once, Assange sent a ‘Thank You’ mail to over 100 donors, listing their email ids in the ‘To’ field rather than ‘Bcc’, thus exposing their names to each other. When it was pointed out, he promptly apologised. But not under his real name.  Donors received a mail from a certain Jay Lim, legal expert from the WikiLeaks Donor Relations Department.