Why Technology multinationals keep hiring the same set of senior executives over and over again. And why it doesn't always work 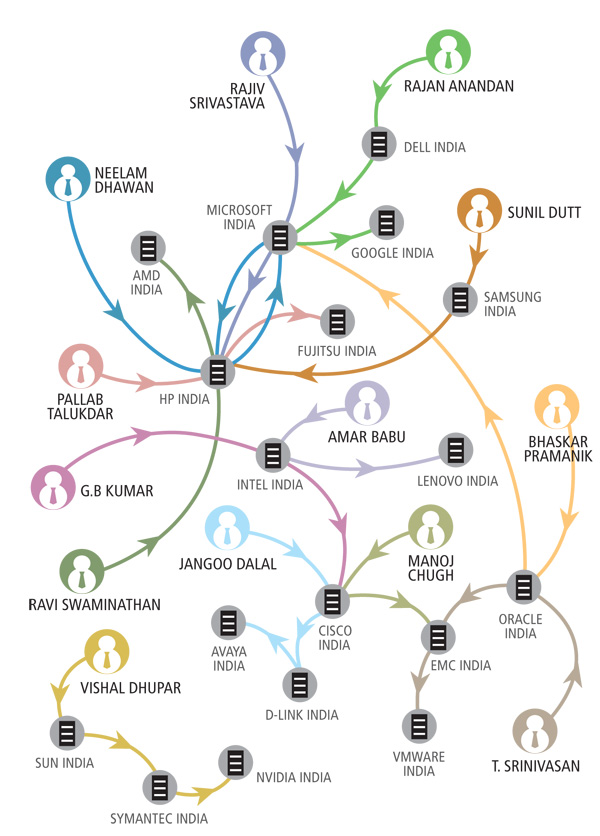 Infographic: Hemal Sheth
One fallout of the 2011 cricket World Cup is the slew of resignations by captains whose teams (Australia, England, South Africa) fell by the wayside.
What a waste of experience! Here’s a thought: What if West Indies hired Australia’s Ricky Ponting as captain and England, New Zealand’s Daniel Vettori? What if Pakistan did the same with South Africa’s Graeme Smith?

This hypothetical, and possibly nonsensical, strategy converts quickly to reality if we replace national cricket teams with multinational (MNC) technology companies like Microsoft, Oracle, Dell or HP that operate in India.

A few weeks ago, Microsoft hired Bhaskar Pramanik, the former head of Oracle India, as its chairman in India. In January, Google hired Rajan Anandan, earlier managing director at Microsoft India, as its sales and operations head. Microsoft itself hired Anandan in 2008 from Dell India, where he was its country manager.

Pramanik, Anandan, Dhawan and about a score other senior technology executives like them are part of an exclusive and close-knit group of managing directors of technology MNCs in India. Entry into the group comes with your first MD title, a title that’ll stay even if the company name on your visiting cards keeps changing.

The MNC MD Gene Pool
The ability to deal with complexity and ambiguity is one of the biggest reasons multinationals prefer to hire executives that have already led other multinationals. Compared to Indian firms, the average multinational is a minefield of reporting structures that crisscross across different verticals, countries and product lines.

“Within the country, several groups of people may be aligned differently, chasing different goals,” says T. Srinivasan, India managing director of VMWare, a $2.4 billion software maker. Before working at VMWare Srinivasan had held senior positions at multinational firms such as EMC, HP and Oracle. Kris Lakshmikanth, CEO of Head Hunters India, an executive search firm, adds, “In multinationals, you are usually reporting to three to four bosses — one in Hong Kong, one in Singapore, one in the US. Even your subordinates will be reporting to three to four people. Not many people can play this game because in India the lines of reporting are very clear.”

It’s not an environment many executives will like, nor survive easily. This is why companies seek candidates who have worked and thrived in a multinational setting, to avoid the chances of a rude shock months later.

For companies, the ‘MD’ tag is also a surrogate for years of hard experience and a rolodex full of high-ranking contacts, a must when it comes to swinging large orders in India.

Hiring MDs from their peers or rivals is also a way for multinationals to stay clear of mavericks and the highly independent. That’s because high-level strategy in multinationals is usually the domain of headquarters or global teams, leaving India mostly in charge of execution. Many hard-charging executives who join multinationals often end up frustrated when they realise their jobs have very little strategy formulation. “The country manager in many of these multinationals is often just a sales manager in charge of the India territory. He may be called ‘country manager’ simply because the company wants someone to be seen as its ambassador in India,” says Lakshmikanth.

But just like inbreeding tends to increase the chances of congenital defects in human beings, over time it affects multinational companies too.

Congenital Defects? The flip side of being easily hire-able is, ironically, being easily fire-able. There have been numerous instances of multinational MDs being fired from their jobs, in most cases for being unable to deliver the kind of fantastic growth rates they promised during the heady pre-recession days. Of course, companies don’t reveal or acknowledge it publicly, even though most people within the industry might know even intimate details around such events.
This culture has accelerated over the last five or six years, as multinationals’ revenue from India has grown rapidly, becoming significant entries on their quarterly and annual reports. This led to a short-term focus on delivering promised numbers and keeping the analysts happy.

“The first thing multinationals want executives to deliver is good sales numbers — sell dabbas and build market share,” says Rajiv Kaul, CEO of CMS Infosystems, an IT and business services provider majority-owned by Blackstone Capital, and the MD of Microsoft India till 2005.

Those who can’t are simply let go.

In a smaller number of cases, executives have been let go because they adopted unethical methods to acquire and report revenue, like, for instance, making false sales to their channel partners just to achieve quarterly sales goals. Business newspaper Mint referenced an internal investigation at Microsoft India about fake sales orders generated to channel partners, often called “channel stuffing”, which was connected to Neelam Dhawan’s subsequent exit from the company. At least three other top-tier technology companies also faced issues around fraud orders, leading to internal investigations and firings.

Many new MDs, once they are on board, poach their favourite subordinates. At times this creates resentment within the reporting structure into which the new hires are parachuted.

A final criticism is that after a while there exists a certain predictability and equilibrium to the ideas and strategies of the same set of people. This makes it truly hard for any company that hires them to differentiate itself strategically.

Of course, the cynics say there was never any need for strategy, so this is probably a benefit not a problem!

Waxing and Waning MNCs
Studying the history of Indian IT also offer clues to how the “MNC MD gene pool” came about.

The early 1990s saw most multinationals set up small ‘outposts’ in India to primarily test the waters. These operations were often headed by non-resident Indians who were working with these companies in the US.

As revenue started picking up, the companies started hiring local talent.  But as their companies started attaining a critical mass in India, they flew in experienced employees from international locations to scale things further. The local hires instead found their heads hitting a glass ceiling.
“But their aspiration was to become an MD. When I asked senior job seekers at Microsoft in those days what they wanted to do in life, most would say they wanted to become the MD of a large company,” says Kaul.

All of that changed once IT services exporters like Infosys and Wipro gained significant scale. “Suddenly, you had guys there managing $300-500 million profit-and-loss accounts and holding stock options worth serious money. The halo and sheen shifted to them,” says Kaul. That was also the time telecom started taking off in a big way, becoming another high growth rival to multinationals.

“That was probably the time many multinational CEOs should have reinvested in their careers by trying to shift sectors and learn new skills for possibly a short-term salary drop. Most didn’t. So, today they are ‘stuck’ with multi-crore salaries, 7-Series BMWs and fancy houses. They’re too expensive and too old for other sectors,” says Kaul.