The Cuckoo’s Calling has known tropes, but is overwritten, noisy 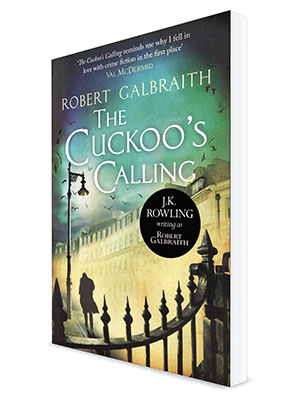 One of the reasons for the enduring popularity of the crime novel is its comforting familiarity. Particular tropes may have changed over the years—the impermeable Hercule Poirot, for instance, has given way to detectives who get progressively more damaged with each case—but some clichés have now moved into the so-bad-it’s-good zone. JK Rowling, writing as Robert Galbraith, adopts certain classic plot and character devices with so much gusto in The Cuckoo’s Calling, it’s hard not to smile as one recognises the (physically and emotionally) battered private eye, his blonde lovely, the grungy circumstances, and, equally, the high life where more blonde lovelies swoon over our hirsute hero.

These borrowings from the American hard-boiled/noir tradition are leavened with the gentler conventions of British crime fiction—family secrets, country houses, sun-dappled afternoons—and updated with humour, celebrity culture and social decay. As a debutant crime novelist, Galbraith/Rowling fulfils the first function of the genre by parting the lace curtains and offering us an eyeful of lives that are not our own.

To that end, the author is very well served by a most fascinating cast of characters. There’s the impossibly named Cormoran Strike, the detective, of course—an absolute keeper—and his temp secretary, the newly engaged Robin (and you can so see where that is going). Then there’s a biracial model, now dead, and her vast and often confusing family-members and friends, her dysfunctional neighbours, various extra-marital liaisons, children born on the right and wrong sides of the blanket, glamorous designers, elusive rap artistes, not to mention large sums of money that everyone’s keen to get their grubby hands on.

Investigating the death, Strike follows the cold trail through posh restaurants and run-down dives, snazzy nightclubs and psychiatric units, photo shoots and celebrity homes, all set in a lovingly detailed London. Following that ancient investigative tactic of getting people to talk—and a little help from cellphone voice recorders and Google searches—our man wraps up the puzzle with the set piece expository chapter, where we get to know whodunnit.

Templated though classic detective fiction may seem to be, the elements can still make for a rocking read. Unfortunately, The Cuckoo’s Calling is turgid, verbose and often dull. Even if Rowling hadn’t been outed as the author, chances are a keen reader would have sniffed out the similarities between her bloated social drama The Casual Vacancy and this overwritten, noisy crime novel. Though far more fun than the previous outing, Cuckoo yearns for a strict editor, a less self-indulgent style of story-telling.

Most critically, perhaps, Strike’s methods of detection seem to leave far too much to intuition and good fortune: His conclusion that a dyslexic witness misread a crucial will, for instance, is based on nothing more than supposition and wishful thinking.  As the work of Galbraith, this clumsily titled book would have perhaps enjoyed some niche success and then settled in the back shelves. As Rowling’s latest, it is destined for a long season, as is Strike. This time, it might be the die-hard reader indulging in some wishful thinking, hoping the author fulfils her protagonist’s promise.

Tweets by @forbesindia
How Avendus Stayed Ahead of the Market
Give and Take: Kind Acts Can Fetch Corporate Success