Easy on the eye, short on performance

Adamo is Dell’s name for a new line of slim, stylish, price-no-bar laptops. The first of these, the Adamo 13, is a sculpted rectangular slab no more than 0.65 inches thick and available in either Onyx black or Pearl white.

The look is unlike anything Dell has produced before, with a strong industrial feel and textured etched aluminum incorporating multiple patterns and textures which make it feel minimalist, yet indulgent. The materials are top-notch and even the showy transparent box it comes in and the slim power brick (part of the laptop’s external power supply) are nicely thought out.

The whole point is to look good and stand out from the crowd, which is something the Adamo line should do very well. 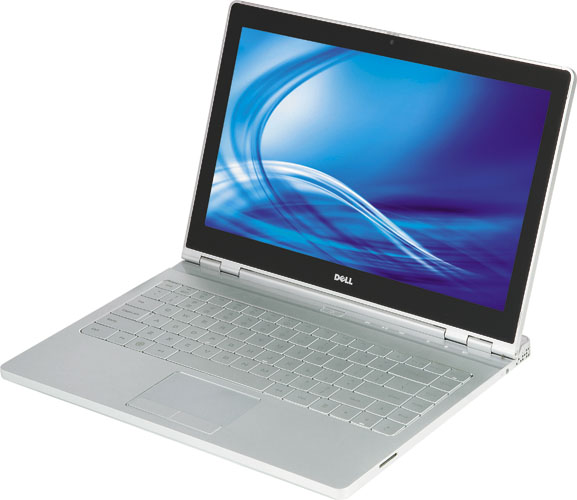 The price of such style? A cool Rs. 1,20,000 onwards.
Opening the lid you’ll first see the 13.4-inch screen which is bright and sharp, but surrounded by a rather thick black border. It’s also completely glossy, which looks great but isn’t the most usable indoors. The unique scalloped keyboard with its slightly concave flat keys and white backlighting is mostly comfortable to use, except for the lowest row of keys which is somewhat obstructed by the rim of the main body. The trackpad boasts a single multi-touch gesture: Pinch-and-spread zooming.
We found the gesture detection a bit too sensitive, and had to adjust it in the software settings. The metal and glass lid is sturdy and solid, and is hinged about an inch lower than the rear edge in order to accommodate the laptop’s power, Ethernet, and expansion ports. It’s an unusual design, but helps keep things thin all around.
The two USB and one combo USB/eSATA ports at the back are a pleasant surprise for a laptop of this size. Also in the back are the stereo speakers, resulting in pretty hollow-sounding audio playback. Strangely, there’s no Kensington lock slot (an anti-theft system) to be found, but there is a SIM card slot for cellular data access, once that becomes available here. In the absence of an optical drive, at least an SD card reader would have come in handy, but one hasn’t been included.
The Adamo 13’s main shortcomings can be found inside its beautiful body. For starters, the CPU is an anemic 1.2 GHz ultra-low voltage Intel Core 2 Duo U9300, which is good enough for common tasks but actually struggles quite a bit when it comes to playing high-definition and even some standard resolution videos. Even with 2 GB of DDR2 RAM, playing recent games is simply out of the question thanks to the weak CPU and onboard graphics.
Wi-Fi N, Bluetooth 2.1, Gigabit Ethernet, a 1.3-megpixel webcam and Windows Vista Home Premium 64-bit are standard, though not exactly thrilling.
The only really cool piece of hardware inside it is the non-optional 128 GB solid-state hard drive. You can choose a Pearl Adamo 13 with a 1.4 GHz CPU and 4 GB of RAM for an additional Rs. 20,000 and also outfit it with a matching external hard drive or DVD-RW, but there are no configuration options for the graphics, memory, storage, or anything else.
Dell has also attempted to pretty up the software. Windows Vista sports a custom login screen background and all desktop icons are by default hidden in favour of a dock-like launcher bar on the top of the screen. The launcher seemed needlessly intrusive, with programs like Windows Media Player listed under “Music” as well as “Videos” and some truly ghastly animation effects.
Dell also bundles a few webcam-related applications to let you add special effects on the fly (at the cost of some serious lag) or video chat via common IM protocols.
Battery life is claimed to be five hours, but we only managed this by leaving the Adamo 13 on and doing nothing. Moderate usage including Web surfing and a bit of movie playback gave us less than three hours in testing. Not only is the battery non-removable and non-user replaceable, but there is also no LED indicator to tell you whether it’s charging or not.
Benchmark scores were also quite underwhelming. The audio compression, video transcoding and file archiving tests took 223 seconds, 127 seconds and 133 seconds respectively; nearly twice the time taken by most of the mainstream notebooks we’ve recently tested. In fact, the test scores veer dangerously close to netbook territory.
You could easily get performance like this in a sub-Rs 40,000 laptop today. Dell is betting rather heavily that there are enough people who have no budget constraints and who care only about looks. While there’s nothing stopping you from buying an Adamo if you like it, you should know that a whole lot better can be had for half the price.
(Jamshed Avari is Assistant Editor – Technical, at Chip. Read other reviews at chip.in)

Tweets by @forbes_india
A Coming of Age
Shailesh Rao: Team of Rivals & The Goal