The next in the Freakonomics series

Your birth month might have a significant bearing on what you achieve in life and, indeed, who you are.  If someone is having a baby in May in south-east Uganda, or Michigan for that matter, chances are that the baby will be born with birth defects.  Now let’s examine the same thing in sport. In soccer, half of the players in a British team are likely to have their birth dates between April and December while the other half between January and March; 50 percent of the players born in 25 percent of the year.

SuperFreakonomics, the follow-up to the bestseller by the same duo, Freakonomics, is filled with an assortment of such facts. Levitt and Dubner seem to delight in using these seemingly bizarre data points to arrive at fairly astounding conclusions. 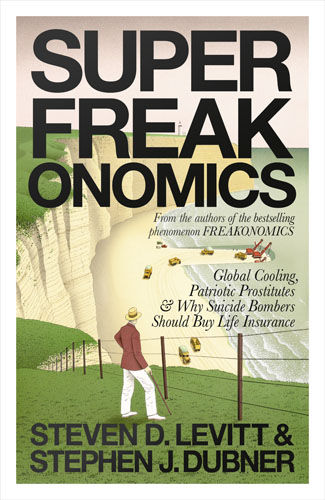 Take the first example. The populations of both south-east Uganda and Michigan are largely Muslim. So a baby born in
May was in gestation in the month of Ramadan during which the mother was undergoing strict daytime fasting. It is, in fact, even more complex than it sounds. Since Ramadan follows the lunar calendar, the fasting dates vary each year. So if Ramadan falls during summer, more daylight hours mean longer periods without food and drink, which is even worse for the baby.
Now let’s move on to the British soccer players. The kids who wind up playing the sport at the highest level usually start playing when they are very young. In Europe most youth soccer leagues use December 31 as the cut-off date. So, take two seven-year-olds, one born in the first quarter, the other later in the year. The January-born lad, since he’s a bit older, is likely to be physically stronger and thus more likely to be picked.
This book pretty much follows the same theme as Freakonomics, using economics to explain everyday events. And it all boils down to common sense.
While leafing through the book, one can’t help but admire Levitt and Dubner’s ability to dig out research and data — from sociology, psychology and even history — that bolster their arguments.
All of Chapter One, for instance, is about how Chicago prostitutes can teach economists a thing or two. This is drawn from research done by Sudhir Venkatesh, a sociologist at Columbia University. The narrative flits effortlessly from how working with a pimp is financially more rewarding for a prostitute than her working alone, to how in the high-end world of escorts, the more a prostitute charges, the “less actual sex” she has.
But the reason why the book is being talked about so much is a chapter titled ‘What Do Al Gore and Mount Pinatubo Have in Common?’
This is perhaps the one chapter where Dubner and Levitt end up burning their fingers in an attempt to pass an authoritative judgment on the climate change crisis. They debunk the strategies proposed by environmental economists and climate scientists to reduce carbon dioxide emissions. A large part of this chapter is dedicated to the work of Nathan Myhrvold (the former Chief Technology Officer at Microsoft, who later set up Intellectual Ventures), who has proposed a radical idea: Reverse global warming by pumping sulfur dioxide into the atmosphere. This, he argues, will replicate the global cooling of volcanic eruptions. People like Al Gore seem to be at the receiving end of Dubner and Levitt’s ire in this chapter, which hasn’t gone down very well with the scientific community. Perhaps this is a theme that the Superfreakonomists would have done better to leave untouched.
Dubner and Levitt are, at the end of the day, smart aggregators of diverse data points and unconventional research themes. The book is interestingly written and definitely worth a read.
Freakonomics sold 4 million copies in 35 countries. Let’s see if Superfreakonomics lives up to the high standards set by its predecessor.
Superfreakonomics: Global Cooling, Patriotic Prostitutes and Why Suicide Bombers Should Buy Life Insurance
by Steven D. Levitt & Stephen J.
Dubner; Allen Lane;  256 pages; Rs. 395