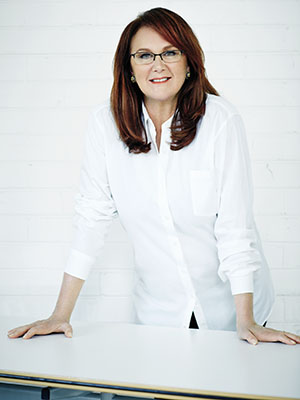 Naomi Milgrom knows exactly what she’d like carved on her tombstone: “Don’t mess with my logo.” As sole owner and executive chairman of three of Australia’s best-known fashion chains, Milgrom takes logos—and the names they represent—seriously indeed.

“I’m deeply involved in everything about my brands,” says Milgrom, 61, whose private company, ARJ Group Holdings, owns women’s clothing retailers Sportsgirl, Sussan and Suzanne Grae. “That could mean store design, that could mean the length of a garment, it could mean a lipstick container.” Most days she pops into at least one of her stores, watching shoppers and asking sales assistants about customer feedback.

The three chains combined have 504 stores and 4,020 staffers across Australia, generating annual revenue of $445 million in the year ended last June. Milgrom has managed to keep net profit at around $27 million for the past three years, and staff and store numbers fairly steady despite escalating competition from the arrival of international chains such as Zara and Topshop, and the explosion of internet purchases by Australian shoppers from retailers overseas. This, she says, is thanks to cost-cutting and supply-chain management—not head count reduction.

“My emphasis is always on keeping people employed,” says Milgrom, one of Australia’s richest women, with wealth estimated at $383 million by the Business Review Weekly magazine. Milgrom says she welcomes the competition, although she’d like to see Australia lower the $890 threshold that online buyers enjoy on overseas purchases before the 10 percent goods and services tax kicks in. “Having more competition in the marketplace sharpens your pencil and certainly gets your creative juices flowing,” she says, noting that Topshop is a direct competitor of her trendy, youth-focussed Sportsgirl, while Zara’s market is probably halfway between Sportsgirl and Sussan.

Karen Webster, associate professor of fashion and textiles at RMIT University in Melbourne, says Milgrom’s business has a big advantage over the international chains: Milgrom herself. “It all comes down to vision and passion,” Webster says. “It’s still a family-type business, not owned by private equity or driven by shareholder returns. There’s not just a bottom-line focus, churning it out, there’s a real passion around the products. The whole vision permeates to the shop floor. The large chains are too big to do this.”

Another difference, says Webster, is that Milgrom’s brands each know their market well—and stick to their knitting. Sportsgirl’s vibe is quirky, fun and energetic, with hordes of teenage girls hovering around its makeup bar; Sussan focuses on a more mature customer; and Suzanne Grae offers on-trend fashion at lower prices. “This is one formidable company,” Webster says.

For now Milgrom has no firm plans to compete with the global high-street behemoths by opening stores across Asia. “We’ve had a lot of approaches over the last five years,” she says, adding that Singapore looks interesting.

Typically, Australian retailers expand into New Zealand. Under its previous owners Sportsgirl had five stores in New Zealand, but administrators closed these just before Milgrom bought Sportsgirl in 1999. More recently Sussan and Suzanne Grae had about ten stores each in New Zealand, but these were shuttered as the country’s rising real estate and labour costs and lower disposable income made the venture uneconomical.

Milgrom sees the internet as the best way to take her brands global. Sussan started selling online two years ago, and Suzanne Grae follows this year. Sportsgirl was one of the first Australian clothing retailers to have a serious Internet strategy, developed eight years ago. Online sales now account for 3 percent to 5 percent of Sportsgirl/Sussan sales. Would Milgrom like to see that grow? “I’d like to see my sales go higher; I don’t think the channel of distribution is relevant,” she says.

Fashion retailing is in Milgrom’s blood—but she took a while to join the family business. Her grandmother, Faye Gandel, opened the first Sussan store in Melbourne’s Collins Street just before World War II, selling lingerie. Milgrom’s father, Marc Besen, is a wealthy Melbourne entrepreneur who, with brother-in-law John Gandel, expanded the Sussan Group to 180 stores and built a large shopping center in the city’s west. (Gandel is on the Forbes rich list for Australia at No. 8 with $3.2 billion in wealth; Besen doesn’t appear on the Forbes list because his fortune is dispersed among family members.)

Milgrom says her grandmother was a strong influence, both as a business role model for women and as someone who valued family. “She was a woman in business in 1939, when it probably seemed very tough. I remember stories about suppliers standing outside the door at the close of business every day because they were concerned they wouldn’t get paid.”

Her parents, she says, instilled in her the importance of philanthropy. Marc and Eva Besen are generous benefactors to arts, health and Jewish causes, and Milgrom has followed suit. In April she is funding a new foundation for design and architecture, two of her great passions along with contemporary art, music and landscaping. “Philanthropy is an integral part of who I am and very important to me,” says Milgrom, who drums these values into her businesses by having each brand support female- oriented causes such as breast cancer awareness and eating disorders.

Her parents also gave Milgrom the confidence to choose her own destiny. “I was made to feel that I could tackle anything; there was never any expectation, I followed my own path.” Initially that path included four years working as a special education teacher in Sydney, helping autistic and schizophrenic children with language problems. She then worked in publishing and advertising, learning about the value of brands.

In 1990 her father called with a proposition. Sussan was slipping into frumpy territory, and Besen wanted Milgrom to breathe life back into the brand. “I said, ‘I really don’t have any experience in retail, but of course I’d love to come in and help on some sort of basis,’” Milgrom recalls. Surprisingly, she says working in the family business had never been mentioned before. “I loved what I did—I was very passionate about working with children, and I was passionate about working in advertising and publishing.”

Under Milgrom’s guidance Sussan was reinvented as a fashionable cloth-ing and sleepwear retailer for women in their twenties and thirties. She then did the same for Sportsgirl and Suzanne Grae, giving each a modern makeover. (Sportsgirl was established in 1948; Suzanne Grae in 1968.)

“Each of our three brands is a heritage brand that has been around a long time, with great consistency in the marketplace,” says Milgrom, who bought out her parents and three siblings in 2003 to assume sole ownership of the three chains. “The real trick and the real key, and I think what we’re really good at, is making them contemporary. Fashion brands have to evolve, like all brands.”

Tweets by @forbesindia
For Rajasthan Patrika, it is Readers Above Advertisers
Himatsingka Seide: Spinning a Success Story