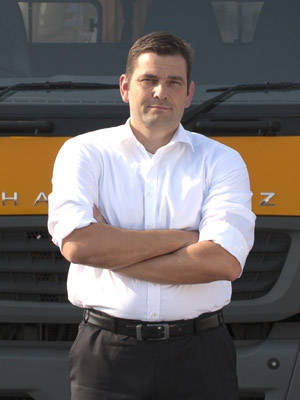 The character of a company comes out when it is getting rough. We are absolutely in line with our business plan. This is very German,” said Llistosella

Earlier today, Daimler India Commercial Vehicles (DICV) launched four new trucks in the Indian market. Read that as three tractor models and one construction mining model. But the launch of the trucks was just a side show, ahead of the Motor Show 2014 that begins in New Delhi next week. Daimler’s main idea for the event was to reassure the world that Bharat Benz is alive and “everything is on track”.

Off late, the company has faced some criticism from a section of the media that all’s not well at DICV; that the company is financially sick and its dealers are going through a very tough time.

Of course DICV’s MD & CEO Marc Llistosella has not been happy about this. So, Llistosella did what he loves to do. Talk. A lot.

In a speech that lasted about 30 minutes, he summed up his company’s state of affairs and the state of the Indian trucking industry thus:
In November, 2013, the total retail sales in India, not wholesale, was about 10,000 units. What was the number in November 2011? 30,000 units. The market is as bad as it can get. But Daimler’s plans are on track. All the milestones the company had set, six years ago, have been met.  Product, investments, sales points... everything. “Times of difficulties are times of opportunities. The character of a company comes out when it is getting rough. We are absolutely in line with our business plan. This is very German,” said Llistosella.

In almost 15 months of operations, DICV has sold 7,500 vehicles. What’s the company’s total plant capacity in Chennai? 36,000 units. The company has already appointed 70 authorised dealerships and will increase it to 100 by end of this year. “You cannot avoid hard times and doom,” said Llistosella.

-Daimler’s competitors are sitting on inventory levels of more than 50,000 units and are making huge losses. They are desperate and are giving almost 30 percent discounts on their products. This is a bad practice. From day one, Daimler has maintained that it will offer “no discount” on its products. “We don’t want to hamper our brand and the customer must have a predictable residual value of its products. We do what we say,” said Llistosella.

-On March 6, 2014, Daimler will have a ground breaking ceremony for Bharat Benz buses. The company believes it has the right partners to take this next step. “We stick to the plan. We stay together,” added Llistosella.

-DICV will begin exports to 15 markets. These will include countries like Kenya, Zambia, Mauritius and Indonesia. “Are we the frontrunners? We are the pusher, challenger and do not copy what others are doing,” said Llistosella.

-Nobody buys a truck as a gift.

At the very end of the press conference, I spoke to a dealer (who didn’t want to be quoted) to check how things are. He said, “It could be better.”
Me: “Is there any sign of your profitability? It’s been 15 months.”
He: “I better not talk about that.”