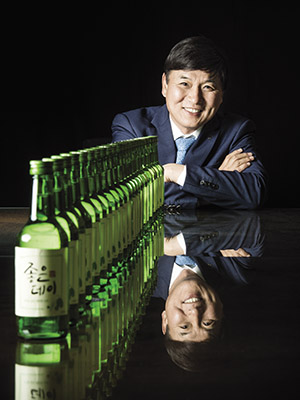 While studying in Japan, 27-year-old Choi Jae Ho received a call from his father that had him packing for South Korea. It was 1988, and he’d been summoned to take the helm at Muhak Soju, the distillery founded by his dad in industrial Changwon on the southeast tip of the Korean peninsula.

As the second son, Choi was to get the lesser of Muhak’s two enterprises. His older brother got Muhak Construction. The family company’s name literally translates to “dancing crane”, a beloved bird in the Asian culture recognised for its lengthy life span and is meant to symbolise a long life.

After arriving at the Soju headquarters, Choi was astonished to find a work culture drained of motivation and drive. Snug sofas placed in each office were ideal for mindless chatter, he recalls, and as soon as the clock struck 6 pm, employees headed for the door. Besides, thanks to a since-repealed law, one liquor manufacturer in each major city was allowed to dominate. No wonder, there was little to be competitive about.

Choi aimed to change all that. First, all the sofas had to go. Choi then went after lacklustre executives. His father’s Muhak Soju had generated $600,000 in annual revenue. But the son wanted this provincial distillery to grow big enough to compete with national brands.

After weathering a number of storms at home over proposals that dad thought were too radical, Choi took full charge of Muhak Soju at 33.

He wanted to reposition the soju market for lighter options. A big hit came in 1995 with the launch of Muhak’s “White Soju”, which had an alcohol volume of 23 percent at a time when all other manufacturers opted for the standard 25 percent. It was not a big drop but bold for an industry with stringent traditions. “During that time, I thought that the alcohol culture is always changing. Why did soju have to be limited to 25 percent? I predicted that the industry would pivot, and I acted faster than others in that regard,” he says.

In the first year, Muhak sold 100 million bottles of White. Choi experimented again. He revamped the design of the traditional soju bottle, giving it a green hue and replacing the crown cork with a twist-off cap. He created what has now become the spirit’s signature look.

Shortly after, in 1998, during the Asian financial crisis, Muhak went public on the Kosdaq. (Choi today maintains hold of about half the shares.) White’s sales helped the company to exit the crisis as fast as it did. His older brother’s construction division, however, collapsed with many South Korean companies during the crisis.

Another opportunity would come in 2006. Big national brands such as Hite Jinro’s Chamisul and Lotte’s Chumchurum were gaining share in local markets as many of the legacy family distillers were being consolidated. To defend Muhak’s position, Choi created a new spirit called Joeun Day (Good Day), with an alcohol content of only 16.9 percent. By this time, there were a number of lighter sojus being sold but not one that fell below 17 percent. “There was a rise in women consumers. I wanted to make something that would complement both men and women and challenge the belief that soju was bitter,” Choi says.

Three years later, on the heels of that success, Choi decided to go after the notoriously competitive market in Busan, a city where a popular spirit, Daesun’s C1, held a whopping 93 percent share. He dubbed this new challenge “Project C1”. Within a year, Joeun Day’s market share grew to more than 50 percent in Korea’s second-largest city. As of April, it was being sold in 85 percent of Busan’s restaurants and bars.

Today Muhak’s market capitalisation of $1.33 billion has snuck past that of Hite Jinro, even as the bigger outfit remains the country’s top producer of alcoholic beverages. This has inspired Choi’s confidence to take on the formidable Seoul market, where Hite Jinro controls nearly two-thirds of all soju sales. His battle plan includes three new fruit-infused products, all with an ABV of 13.5 percent. He aims to capture a third of Seoul’s market in five years, making Muhak the nation’s number two soju manufacturer.

For all his fighting spirit, Choi puts a kumbaya cast on the business: “For me, soju is happiness and a way to bring people together. I will work hard in my role to spread that joy.”

Tweets by @forbesindia
Best under a billion: The top 200
The great American supercar