AirAsia Aims for a Full Flight in India

Tony Fernandes, the feisty owner of AirAsia, has focussed his sights on India. Making his no-frills model work here won't be easy 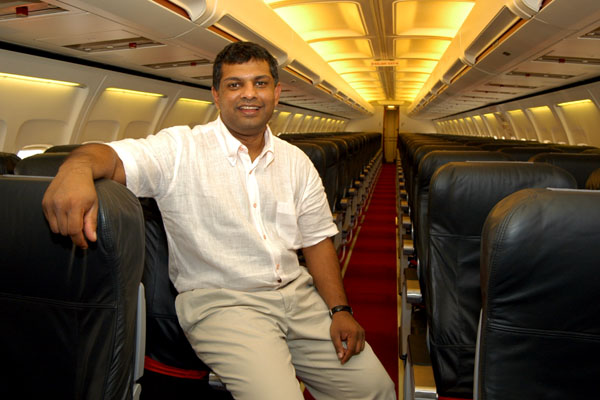 The Genghis Khan of air travel in Asia has arrived. This guy is known to do to fares what the Mongolian warrior legend did to traitors’ heads: Chop them. His slash-and-burn has already begun. His airline AirAsia is offering a return ticket to Malaysia from Indian cities for less than Rs. 10,000, half the price that everyone else is charging. “At these prices, demand is a no-brainer. Full-service airlines like Malaysia Airlines, Jet Airways and Thai stand no chance,” says Madhav Oza, director of Blue Star Travels, one of the country’s largest travel companies.

Say hello to Tony Fernandes, the 46-year old Malaysian entrepreneur of Indian origin who turned around a tottering airline into Asia’s most successful low-cost carrier. Coming off a three-year campaign in China, Fernandes declares, rather gleefully, that 2010 will be his “India year”. He is bringing frightful commitment to his Indian campaign. “It is easy to roll over and play dead. We plan to stay and fight. In India, there hasn’t been anyone who has done this,” he says.

Why India?
Fifteen months ago, AirAsia began operating on the fringes of the Indian market, connecting Malaysia to Kolkata, Trichy, Kochi and Trivandrum. But starting end April, it will up the ante. The airline plans to gradually link New Delhi, Chennai, Bangalore, Hyderabad and Mumbai to Kuala Lumpur and Penang, and from there to over 130 routes.

The Indian market is second only to China in growth. Singapore, Malaysia and Thailand are top-of-the-charts holiday spots for Indians and everyone loves a good deal. Over the next year, he plans to ferry two million passengers — many of them first-time air travellers — to India and back on about 148 weekly flights.

There is also an emotional reason why Fernandes is keen on India. His family hails from Goa. “My dad would have been over the moon to see AirAsia connect to India,” he says, “If I can’t make it work here, I might as well pack up and go back to the music business.”

That’s the other thing you should know about Fernandes. He had no experience in airlines till nine years ago. Fernandes ran a music business when he was introduced to the wily Malyasian Prime Minister Mahathir Muhammad in 2001. Mohammad persuaded Fernandes to buy out his government’s stake in the struggling Air Asia for just one ringgit. It was a terrible time for a new entrepreneur to step in. The global aviation industry was in a complete funk after the terror attacks of September 11. Passenger traffic was at an all-time low. But Fernandes not only turned around AirAsia, paying off all the debts, he even figured out a way to go one up on his role model, the Irish airline Ryanair, till then considered to be the best low-cost airline in the world. At $3.21 per available seat kilometer, AirAsia’s costs are today the lowest in the world. Since then, AirAsia has consistently expanded its network in the Asia-Pacific region, making it the region’s biggest low cost carrier and developing a formidable reputation for management innovation. And Fernandes, with his bright red baseball cap, is now a Malaysian icon and a formidable adversary.

Turbulence Expected
His Indian adventure though, won’t be smooth sailing — something that Fernandes has already begun to realise. To make his low cost model work, Fernandes needs airport operators — which includes the government-owned ones — to play ball. For nearly three years, AirAsia has been negotiating with the Airport Authority of India and private firms that run airports in Mumbai, Delhi, Bangalore and Hyderabad for better terms compared to the network carriers. But he’s had little success. They aren’t willing to make any special allowances for him. Both ground handling charges and security costs remain very high. “Both the government and private Indian airports have not woken up yet. The high airport costs are one reason why no low-cost carrier has done well in India,’’ he says.

Back home, Fernandes had to go through a similar tussle with Malaysian Airports, the operator of the KL airport (incidentally, a partner in the Hyderabad airport). He has called the airport operators ‘parasites’ and resents not being allowed to build and operate his own terminal near the capital city. “Low cost airlines drive up passenger numbers and non-aeronautical revenues through shopping, food and other income, can be a massive earner,’’ he says. The Indian airports are not being very smart. “They look at the airlines as cash-tills.’’

Add the growing congestion in major airports like Mumbai, which will mean burning more expensive fuel. The legendary 25-minute turnarounds, that help the airline flog its planes for up to 13 hours daily, look tough at the large airports here.

So if the costs are the same for every airline, be it full-service or low-cost, the question that aviation watchers are asking: How will AirAsia sustain their aggressive pricing? This is something that even low-cost evangelist Captain G.R. Gopinath found tough. “Tony Fernandes is a brilliant guy and has lower costs than others,’’ said Gopinath. “In India airlines have formed a cartel and no one is willing to break. AirAsia and Tony are not afraid to rock the boat, they have done it in the rest of the world,” he says. 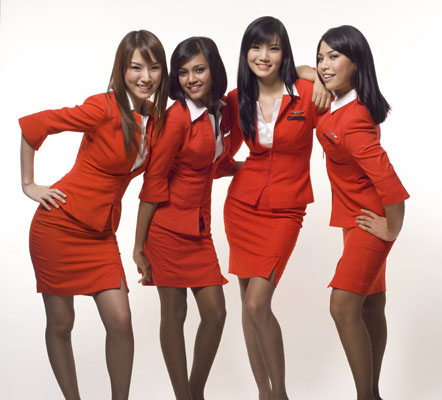 Smoking Aces
Call it tsunami marketing. That’s how Kathleen Tan, who heads the airline’s commercial operations in India, describes their approach. “We do not believe in half measures,” she says. AirAsia group’s entry into India will be through three separate companies — a strategy never tried by any other airline before. The Government of India clearances weren’t easy, but are now finally in place. The Sepang-based parent AirAsia Bhd will start flights from Kuala Lumpur to Hyderabad, Banglore and Chennai in stages this year. This is in addition to Trichy, Kolkata, Kochi and Thiruvananthapuram, which are already connected. Thai AirAsia (a joint venture with Shin Corp) will start with flights from Bangkok to four points in India later this year. This will open up Phuket, Krabi and nine other points in Thailand to passengers from India, who can connect to them from the AirAsia Bangkok hub. The third company, the group’s long-haul airline AirAsia X (a venture with the Virgin group) will start flying to Mumbai and Delhi by the middle of the year with bigger A330 planes.

The plan has been carefully laid out and banks on rapid expansion and improved frequencies over the next few years. “When the India flights were announced this week, we started marketing them in India and began promoting them in Singapore, Jakarta, Melbourne and China,” she says. She recently met an Indian entrepreneur on the flight from Kolkata to Kuala Lumpur, who says he can now connect to China much more easily. The journey via Delhi, would have taken him two days.

Tan is also leading the move to transactions on the internet, cutting out travel agents from the picture. “We have to be disciplined. I know the agent community in India is very strong, but there is no way we will sell them tickets cheaper than to the passenger,” she says. Red tape and government owned airlines and airports are an obstacle in most markets. “But we are like pit bulls. We will keep at it, until we get our way,” she adds. Fernandes says he will depend on the culture of innovation in AirAsia. The company has a very flat organisation. No one has any titles. “Unlike most Asian companies, we have controlled anarchy in AirAsia. I’d rather have 6,000 brains working for me than just 10,’’ he says. 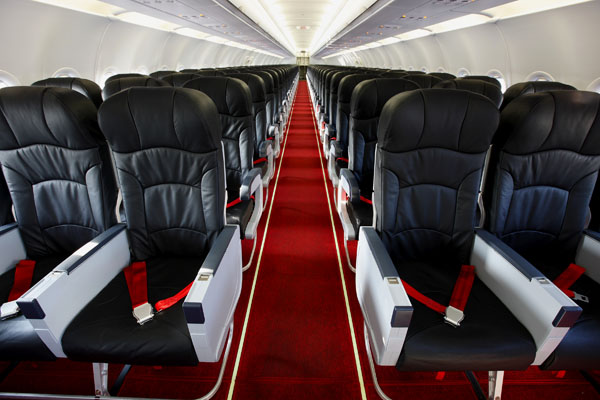 Low cost airlines drive up passenger numbers and non-aeronautical revenue can be a massive earner
Beyond Selling Tickets
AirAsia has been able to increase ancillary revenues, much beyond Indian low cost carriers. Revenue coming from hotels (it has its own chain), baggage, food sale and on-board duty free sales, amounted for 20 percent of the airline’s sales in the last quarter of 2009. AirAsia has a policy of no fuel surcharge won its tickets, but all checked baggage is charged. In India, passengers can buy this space for bags of up to 15 kg at Rs. 450, with prices going up with the weight. They can also buy blankets and pillows. A Malaysian Nasi Lemak or a smokey barbeque chicken meal is priced at Rs. 150. Meals have to be paid for even in the premium economy section of AirAsia X. The premium seat, with a fully flatbed is available at roughly three times the economy ticket.

The AirAsia group made $38 million in ancillary revenue in the quarter ended Sept’09, earning close to $10 from every passenger apart from the ticket cost. The plan is to increase this to $12 this year. LCCs have triggered an ancillary revenue (merchandising) revolution and a CAPA report expects airlines to earn close to $58 billion from selling seat allocation to concert tickets and mobile credits.

At the back end, the airline has looked for new ways to keep ahead. The most recent big move in January was an alliance with rival Australian low cost carrier (LCC) Jetstar, to pool spares and expertise that will result in huge savings for both the airlines. Jetstar is a subsidiary of Australian airline Qantas. LCCs typically operate on their own. This is the first time two growing players in the Asia-Pacific region, one of the fastest growing markets of the world are seeing value in working together. “The relationship is a foundation of much bigger things,’’ said Alan Joyce, the Qantas managing director, while announcing the partnership in January this year.

For the moment though, Fernandes knows he has his task cut out in India — and he isn’t shying away from it.