How Nandan Nilekani Took Aadhaar Past The Tipping Point

Despite the Supreme Court’s recent strictures on Aadhaar, Nilekani has ensured that the scheme is now too big and too widely used to be scuttled 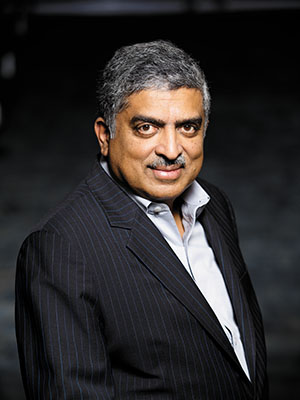 Nandan Nilekani has pulled it off. Well, almost. In another six months he would have quit while he was ahead, after having enrolled 600 million Indians (and possibly some non-Indians) into the world’s largest and most audacious government ID project, the Unique Identification Authority of India’s (UIDAI) Aadhaar.

“Look at how many challenges we’ve contributed to help resolve: identity, financial inclusion, less-cash economy [cash transactions form the bedrock, globally, for fraud and corruption], direct benefit transfer and subsidy reform,” he told Forbes India one Friday evening in September in a relaxed mood at his residence in Bangalore’s Koramangala suburb. He looked weary yet content.

A few days after we met, credible news reports said Nilekani—IITian, ex-CEO of Infosys, best-selling author, world-flattener and chairman of the UIDAI—could soon add another title to his glittering CV: He was likely going to contest the 2014 Lok Sabha elections from Bangalore as a Congress candidate. (When we asked a follow-up question later, he wouldn’t comment on it.)

But then on September 23, the Supreme Court had to go and spoil it all with an interim ruling saying that Aadhaar was voluntary and its use could not be mandated by any government agency in order to provide services to citizens. (As we go to press, news reports say that the government will seek a review of the order.)

The ruling is not surprising: Aadhaar was always voluntary. But, over the last year, more and more states and government agencies were making its use mandatory for a host of services, from buying cooking gas to registering marriages and renting houses. Naturally, this spurred more people to get in line for their Aadhaar numbers and allowed Nilekani enough momentum to put Aadhaar conclusively beyond the reach of its detractors.

“Aadhaar is now too big to fail and too big to ignore,” says Uttam Nayak, Visa’s group country manager for India and South Asia. “Five-hundred million Indians voted for him, and he won hands-down!”
Nilekani himself is confident: “We believe [Aadhaar] is irreversible now.”

Unfortunately, the Supreme Court doesn’t seem to have got the memo.

The main opposition party, the Bharatiya Janata Party, felt Aadhaar numbers ought to have been given only to Indian citizens, not all residents which, in its view, would include millions of illegal immigrants (a view the Supreme Court now seems to endorse).

The Left parties believed it was a ploy to deny subsidies to sections of society.

Civil society and privacy activists were worried it would be used to indiscriminately gather information about people, which in the wrong hands could be used for harassment or mischief.

The bureaucracy fought it too, presumably because it threatened the opacity it thrived in.

Even the Congress had serious divisions over the project’s broad scope: Many saw it as a threat to existing power equations; most powerful of all, the Home Ministry’s National Population Register (NPR) fought to protect its turf.

Rarely has a major government initiative slammed into such a wall of opposition, cutting across political and ideological divides. Frankly, it’s miraculous that the UID survived at all. That it did, and the array of strategies Nilekani used to outwit and outrun his many foes, makes for a riveting study.

Stratagems and Weaponry
Nilekani was very quick off the blocks. He was appointed UIDAI chair in July 2009. The first Aadhaar number was issued in September 2010, and then the pace accelerated: 100 million by November 2011 and 200 million by February 2012. This caught many within the political and bureaucratic establishments flatfooted.

“We felt speed was strategic. Doing and scaling things quickly was critical. If you move very quickly it doesn’t give opposition the time to consolidate,” says Nilekani.

Then the war with the NPR came up. Union Home Minister P Chidambaram (now finance minister) felt the UID’s enrolment process wasn’t as foolproof as the NPR, a mandatory register under his ministry, which enrolled citizens using a strict house-to-house canvassing method involving community verification. (The UID enrolled any resident who walked into a centre.)

Tension between Nilekani and Chidambaram had been brewing for nearly a year, but came to a boil when UIDAI sought approval to enrol all of the remaining population (till then it had only got incremental approvals to enrol up to 100 million people at a time). Chidambaram, it is learnt, put his foot down.

Around the same time, in December 2011, a 31-member Parliamentary Committee headed by the BJP’s Yashwant Sinha categorically rejected the National Identification Authority of India Bill, the proposed law under which UIDAI and Aadhaar were to function; it even suggested that the data already collected be transferred to the NPR.

Faced with what looked like co-ordinated opponents, Nilekani had to compromise. In January 2012, a formula was forced upon both him and Chidambaram: UIDAI would directly enrol another 400 million people (in addition to the 200 million it already had) across 16 states while the NPR would handle the remaining 600 million in the other states. To avoid duplication, the UID and NPR would exchange data, ensuring that each one’s members would get enrolled in the other’s programme at the back end.
By then, Nilekani had realised that convincing everyone was an impossible task. He had spent enough time within Delhi’s corridors of power to realise that there was only so much he could achieve by staying neutral and apolitical.