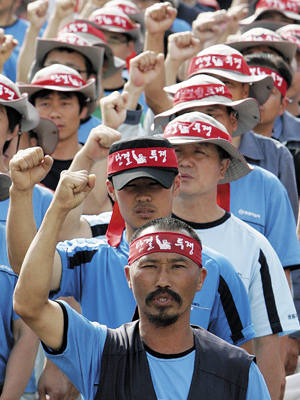 It is strange how much can change in a year.  Last August, SsangYong Motor’s main plant at Pyeongtaek was the scene of trade union militancy rarely seen anywhere in the world in recent years. Molotov cocktails and metal bolts flew and tires burnt as workers took over the factory and fought the police in a strike that lasted 77 days.  They were fighting to keep their jobs and force the government to abandon plans to sack about 1,000 of them. SsangYong eventually agreed to drop the lay-off plans and the workers agreed to a wage freeze. The company that had already filed for bankruptcy then started looking for someone who would bail it out, once again.

Almost from the time SsangYong went into court receivership in January 2009, the smallest of the Korean automakers had started blipping on the radar of Indian auto major Mahindra and Mahindra (M&M). The mergers and acquisition team at the company headquarters in Mumbai began evaluating the utility vehicle maker. “We followed developments all through the battle with the unions. We knew there was a fit, and kept tracking until the bids were called,’’ says M&M executive vice-president V.S. Parthasarathy, who works on mergers and acquisitions for the group.  Analysts say M&M is paying about $400-500 million for a majority stake in SsangYong. A final agreement will be signed by November. The company will not say how much it is paying, but this is clearly one of its biggest acquisitions and a lot rides on it — not just to realise M&M’s plans to be a global utilities player, but possibly more importantly, to guard its flank on the home turf.

Though the synergy from the troubled Korean company is clear, turning it around will be no cakewalk. In slightly over a decade, three large, global players — the SsangYong Business Group, Daewoo Motors and Shanghai Automotive Industry Corporation (SAIC) — have tried to make SsangYong work for them. All three failed. So how does M&M hope to make it happen? Pawan Goenka, president for M&M’s automotive and farm equipment sector says there is a strategic fit between the two is far clearer than ever before.

Fixing SsangYong
High on Goenka’s priority is investing in SsangYong to offer financial stability to the bankrupt company.  The last two years under the ownership of Shanghai Auto have probably been its worst. Sales of its SUVs in Korea dipped every year as diesel prices soared and consumers preferred more fuel-efficient vehicles from manufacturers like Hyundai. The Chinese car maker had paid $500 million for SsangYong, but could never keep up with the investments, especially when sales plunged in the downturn.

“The company needs financial stability to resume normal operations and we intend to make the necessary investments that are required,” says Goenka. As of December 31, 2009, SsangYong had debt of $640 million. Creditors will take haircuts as part of the restructuring and unions have already agreed to job-cuts. M&M will takeover a zero-debt company and the fresh investments will be used to revive operations.

The other big difference, compared to previous owners, will be M&M’s plans to use the combined global network to develop both brands in India as well as globally.  “Together there is a continuum of products with Mahindras at the mid to lower end of the market and SsangYong at the mid to premium end,’’ Goenka says.

Cho Jin Seo, staff writer at The Korea Times, who has been tracking the company in Seoul says, “I’m not sure about SsangYong’s chance in Korean luxury sedan market anymore, but it still has a good brand power in the SUV segment here.” Its overall market share in Korea is now at 2 percent with almost 13-14 percent in the utility vehicles segment. The company sells about 7,000 vehicles every month utilising only about 70 percent of its installed capacity in its two plants.

Infographics: Sameer Pawar
Whether M&M will be able to manage the change is an open question. It does not have to look far for inspiration.  Its larger Indian rival Tata Motors bought Daewoo Commercial vehicles for $100 million in 2004. It has since not only grown the business in Korea, but also used technical expertise from Daewoo to build a global truck.  The Tatas have also been able to tackle tough labour issues, despite their remote management. The strategy was to let the Koreans lead the company. Negotiations with the unions were not easy and were at one time marred by threats of immolations.  Despite this, Tata was able to use the Korean truck design (Novus) in its own programmes. 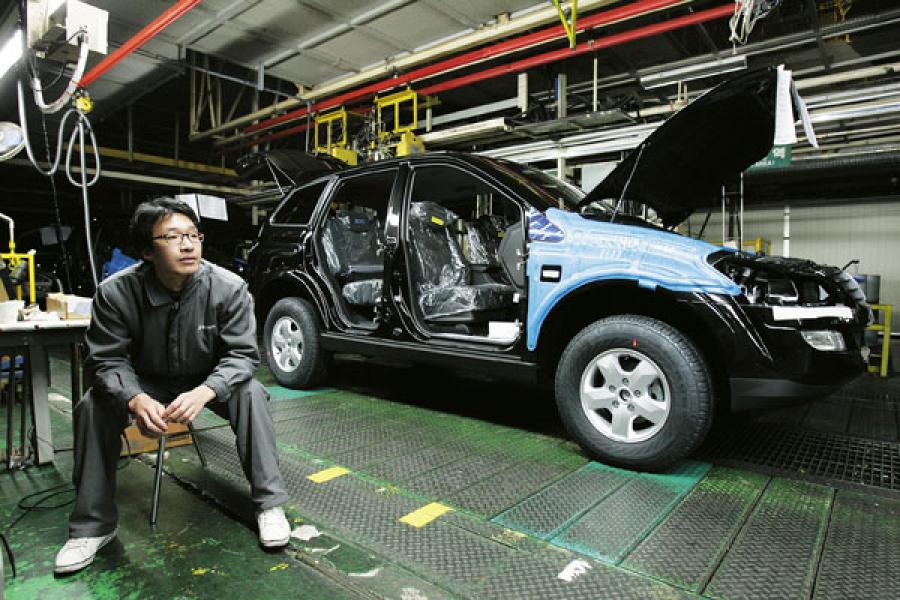 Image: Jo Yong hak/Reuters
ONE MORE OWNER Winning the workers' trust will be crucial for Mahindra
M&M vice-chairman Anand Mahindra is clear that the top management in SSsangYong will be Korean. Problems with SAIC had worsened because of Chinese management and the impression among factory-workers that the foreign company was taking technology out and putting in too little capital in return.

The Tatas have created a very positive image about Indian companies in Korea, says Goenka. “We will obviously demand performance from the company but let the Korean team run it,’’ he says. The ideal mix could be to use technology from SsangYong and M&M’s engineering strength. It is clear that Mahindra will have to focus has to be on bringing new products to the market quickly. Co-design or developing an existing design for a premium SUV with SsangYong could substantially cut time to market.

More opportunity is offered by Korea’s Free Trade Agreement (FTA) with Europe. M&M could use it to export its products out of Korea.  On the component side, India is turning out to be a capacity constrained market, M&M could look at Korea as another cost competitive destination for Korea’s auto parts industry. “This is too early to say now. But the acquisition exposes us to Korean supplier base which has pockets of excellence just like the Indian supplier base has,” says Goenka.

Protecting the Home Turf
Apart from helping realise its global dreams, M&M needs SsangYong somewhat desperately in India. Even though it is India’s largest utility vehicles manufacturer, it does not have any premium SUV product yet. The category has been growing dramatically in the last couple of years and has almost doubled in the last twelve months. Toyota has had a terrific run with the Fortuner, and M&M quickly realised that it could no longer afford to watch others eat its lunch.

“Building a new platform for just the Indian market is expensive and can hardly be justified just for the Indian market. Premium SUV sales in India have not reached that point yet,’’ says Pawan Goenka. The Scorpio was a step above the Bolero and the company is taking one step at a time. SsangYong is all set to launch the Korando, which would help Mahindra get into the next phase, he says. But till then, players like Toyota rule the premium SUV market. The SUV, targeted at a growing urban market, was very successfully launched a year ago at Rs. 19.35 lakh (ex-showroom in Delhi). Quite clearly while M&M continues to be the market leader in volume market share, it has lost some ground in market value share terms.
Another concern with SsangYong is the lack of a robust product pipeline and Goenka acknowledges this. “Product development plans have suffered in the last four-five years where only one new product has been developed. And we know that without a new product we will not be able to turnaround the company because once you have a strong product then nothing else matters,” he says. The contrast is sharp here between M&M’s bet on SsangYong and Tata Motor’s other acquisition — that of Jaguar and Land Rover. One of the key advantages there was JLR’s strong product pipeline and that is paying off now. The absence of a product pipeline is a big concern because M&M will need to keep the distribution channels filled.

Analysts believe that M&M will have to make some significant investments in the short term to enhance product and brand development but in the long term SsangYong will turn out to be a good bet for the company. “By the current sales numbers, SsangYong should be doing about 84,000 vehicles this year as compared to 35,000 last year. So, I think that with a stable management in a period of one to two years, we could see M&M turning around the company and making it Profit After Tax (PAT) positive,” says an analyst. In the short term, not everyone is so positive. Not the least because, Mahindras are already making big leaps in several directions, including commercial trucks. Foreign exchange fluctuations are also being seen as a risk because SsangYong exports about 70 percent of its vehicles to Europe.

Mahindra could look at bringing products from SsangYong’s existing portfolio, like the Rexton II, or the Kyron to boost its product portfolio in India. It would certainly not like to be cornered by players like Skoda, Renault and Toyota, all of whom are stepping up action in the Indian utility vehicles market.