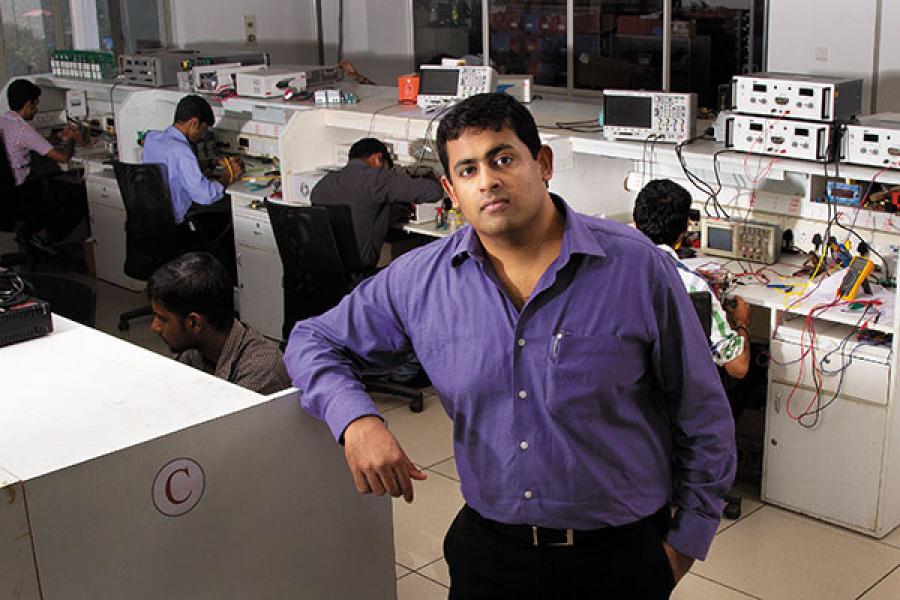 It was 2005. Mithun Chittilappilly had just returned from a two-year study break in Australia and rejoined V-Guard Industries, an electrical appliances manufacturing company founded by his father Kochouseph Chittilappilly in 1977. It was a good time to be a part of V-Guard. By all measures, it was on a smooth sail. Its bestselling product, the iconic stabiliser, was unchallenged in Kerala and had a dominant position in South India. The company, which was growing at a steady rate, had always been profitable and had zero debt. What could be wrong with this picture?

He was about to find out in two years when the senior Chittilappilly decided to list V-Guard on the Bombay Stock Exchange. “Those three months before the IPO taught me that V-Guard was big in Kerala but too small outside,” says Mithun, 33, who became managing director in 2012.

Two key weaknesses were glaringly obvious: Competition (companies like Finolex, Havells) was almost 10 times bigger than V-Guard, which had revenues less than Rs 200 crore; the Kochi-based company was also overly dependent on stabilisers, which accounted for 50 percent of its revenues and 80 percent of profits.

None of the top merchant banks were ready to handle the Rs 60-crore IPO. Not surprisingly, when it opened in early 2008, it failed to attract any institutional investors, save for the banks Kochouseph had known for long, as well as a family friend (who did not wish to be named).

The one saving grace was that the retail side of the offering was oversubscribed 4.5 times, thanks to investors from Kerala. This reaffirmed what V-Guard already knew—“In Kerala, the brand could move heavens, but outside it was hardly known.” The company stock had an offer price of Rs 82 and opened on the BSE at Rs 60; disappointingly, it was still selling at Rs 60 after six months. As Mithun remembers, “When I got married in January 2009, the share was trading at about Rs 40. V-Guard owned land that was valued higher than its market capitalisation.”

Mithun rallied the troops—30 of his senior managers—and decided to face the challenge head on. “We realised that if we wanted to bring the stock price back to Rs 80, we would need to grow by more than 25 percent quarter-on-quarter and year-on-year,” he says.

A BOLT OF GROWTH
They did that, and more. From Rs 300 crore in 2008-2009, V-Guard’s revenues raced to Rs 1,350 crore in 2012-2013; profits have grown four-fold to Rs 60 crore. Further, the company is no longer a one-product wonder. The share of stabilisers is now less than 30 percent of revenue while wires, cables and pump verticals are becoming equally important. Also, last year, 25 percent of its revenues—set to increase to 30 percent by 2013 end—came from markets outside Kerala and Chennai. Most significantly, V-Guard’s stock price crossed Rs 550 this August (a 52-week high) on the BSE.

“We estimate V-Guard’s revenue to increase by 27.3 percent and net profit by 28.8 percent over FY12-15E. The strong product portfolio, complemented by a sturdy brand and distribution network, and increased focused on growing in markets outside South India, should help it gain market share and become a formidable pan-India player over the next few years,” says Niket Shah, analyst at Motilal Oswal Securities Ltd in his March 2013 report.

Even Mithun had not anticipated this degree of success. But he knows that the tougher challenge lies ahead. As V Ramachandran, a Hindustan Unilever and LG Electronics veteran who joined V-Guard in 2012, says, “The real success will be when 75 percent of our revenue comes from non-traditional markets. The challenge is to replicate our success in markets in northern India.”

But the Chittilappilly family is not a stranger to challenges. Kochouseph overcame several, including labour strife, to create a successful company in a state that has otherwise been a tough terrain for entrepreneurs.

A STREET SMART TECHNOCRAT
About an hour’s drive north of Kochi is Koonammavu, a town known for its rosary cottage industry. Over the past decade, Koonammavu has been in the news for another small unit that shares a compound with a school and a church. This is one of the 22 self-help group (SHG) units that assemble stabilisers for V-Guard in Kerala; there are 40 more spread across South India. Thirty-one women—the SHG units are run only by women—assemble 250 stabilisers a day in Koonammavu alone.

The SHG legacy goes back to the late 1980s when Kochouseph was forced to shut down one of his units due to labour unrest and was in danger of losing his company. “I went to a priest who had earlier asked if I was interested in outsourcing some of V-Guard’s work to a unit that provided employment to poor women,” says Kochouseph, 62, who had started making stabilisers from a shed in Kochi. The priest readily agreed; the success of the first unit showed it was a masterstroke. With a maximum of 50 women per unit, there was no room for union leaders. When the company diversified into other products, Kochouseph moved the production to nearby states and later to northern India. The units in Kerala and other southern states continue to manufacture stabilisers.

Kochouseph’s story is rare for a first generation entrepreneur in Kerala, where the economy is largely dependent on tourism and agriculture, and remittances from the Middle East. The private sector, composed of retail and services industries, is dominated by families who were also large landlords. His success was followed by the local media and one of Mithun’s earliest memories is of his father getting felicitated by the government for being the highest tax payer. “It was inevitable that we would join the family business,” he says. His elder brother Arun looks after the two Wonderla amusement parks, one near Kochi and the other in Bangalore. The first of the two parks, near Kochi, was set up by their father in 2000. 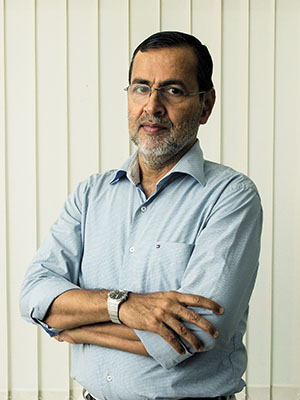 Image: Sivaram V for Forbes India
Kochouseph Chittilappilly overcame labour strife to establish the company in Kerala
PLUCKING THE LOW-LYING FRUIT
Soon after he joined the business, Mithun realised that while the company had quality products, it hadn’t leveraged its brand beyond stabilisers and southern India. “We were rigid,” he says. For instance, despite its focus on the southern states, the company didn’t have a presence in Chennai, where the market was dominated by huge retail chains. These demanded higher profit margins, which V-Guard refused to give.

After the near-debacle of the IPO, Mithun wasn’t taking any chances. All company functions were overhauled. The most important initiatives were taken in sales and marketing. Earlier, executives were responsible for selling all the products; now, each executive specialised in just one product. “Everyone would focus on stabilisers as it was easier to sell,” says Mithun. Special business units (SBUs) were created, and the market divided into sales regions. He roped in Mudra Communications and Publicis Ambience to handle media and advertisements. “Earlier our advertisements were informative in nature. Now they are aggressive, premium and clutter-breaking,” says Ramachandran.

As an organisation, V-Guard shed its rigidness. A new range of products, different from those sold through the traditional channels of distributors and dealers, were introduced for retail chains in Chennai. From near-zero a few years ago, the company now grosses Rs 100 crore from the city annually.

Mithun was cautious to not rock the boat too much. When some of the veterans showed displeasure at the cut in marketing spend for Kerala in favour of new markets, Mithun assured them of more funds if the business suffered. Fortunately, sales in Kerala continue to grow by over 20 percent annually.

His trade partners have noticed the difference in their revenues. “Earlier there was only one person who handled the market in Delhi. Now they have expanded,” says Praveen Berry, who turned distributor in 1999 after buying a V-Guard stabiliser and getting impressed by its quality. The revenue of his firm, Akhil Enterprises, has increased from Rs 1 crore to Rs 8 crore in the past five years.

Mithun says what he has done is not “rocket science”. The idea to create SBUs came from his business school books. For the rest, “I looked around for best practices and what other companies were doing,” he says. But, like Ramachandran said, the real challenge lies ahead.

LEVERAGING THE BRAND FOR MORE
Onam, Kerala’s harvest festival, is also its biggest shopping season. Mithun and his team took the opportunity this September to launch a mixer-grinder.

Mithun is hoping the new product will pave V-Guard’s way into kitchens. But the larger question is if it can make its presence felt outside Kerala and in a market like Tamil Nadu, which is already crowded with other brands. The company admits it will term the launch a success when 75 percent of the revenues get generated from the northern market. Still relatively low-profile in the region, V-Guard has increased its marketing budget to build brand awareness. Again, while it has become strong in the stabilisers segment, it faces stiff competition in products like cables (from Havells) and inverters (from Luminous).

“For the sake of convenience in research, we take kitchen appliances as part of white goods. Once aspirational, this segment—including televisions—has today become need-based,” says Ankur Bisen, vice president, retail & consumer products, Technopak, a consultancy firm. Differentiators like speed, V-Guard’s promise with its new product, may not be enough. “The differentiator today has to be the reach of the product, to be on each and every shelf in the market,” adds Bisen.

One of the areas that Mithun is looking to overhaul to prepare for higher growth is the channel network. While traditionally the company preferred to sell its products through distributors, who would pass them to dealers, V-Guard is beginning to directly tap its end customer. Mithun has roped in Deloitte to revamp its customer service vertical, which will now be centralised in Delhi. “Each place will need intervention,” says Mithun. The expansion into new products will also test the company’s incubation capability, a legacy built by Kochouseph.

The success of these initiatives will also test the company’s ability to keep growing as fast as it has in the past three years. High marketing spends might have cut into profits, but Mithun doesn’t mind that. He wants to make V-Guard a “truly national” brand, and then take it beyond the national boundaries. Perhaps then the ignominy of those IPO days will be erased.