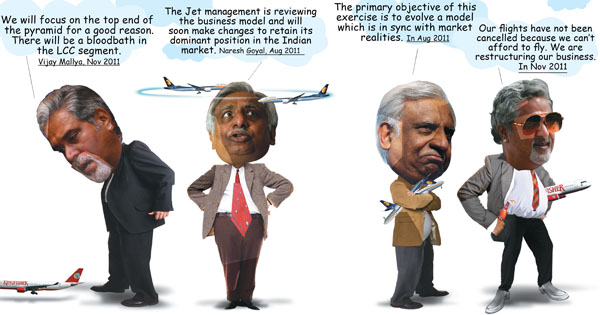 Since May 8 this year, a curious new bird has been flying on Indian skies. Maverick businessman Naresh Goyal has sprung a surprise by launching a new low-fare flying service, Jet Airways Konnect, by taking away half the number of flights from his flagship brand, Jet Airways. And he has done something normally unthinkable — he has ripped out the business class and replaced it with economy class seats. Then, in a complete break with his business philosophy, he made Jet Konnect a low-cost carrier (LCC), setting prices that compete with the likes of SpiceJet and Indigo.

Based on these statistics alone, you’d imagine Naresh Goyal would be in clover. Instead, here’s the paradox: If insiders are to be believed, Goyal is almost about to abandon his Jet Konnect service and reboot operations completely. The trigger: Jet reported losses of Rs. 838 crore between April and September 2011.  That’s not all. The airline has also made significant losses in three of the last four years. Debt is already piling up. The situation is so alarming that the canny entrepreneur has begun to look at every strategic option on the table. One thing is now amply clear: His Jet Konnect strategy may have helped him hold market share at 28 percent for a while, but it failed to make long-term business sense. And neither did JetLite, yet another low fare offering, built from the ashes of the erstwhile Sahara. Neither service had the operational efficiencies of a low-cost carrier like Indigo, nor was their cost structure low enough to allow it to sustain a low-fare strategy.

The realisation has dawned that Jet Konnect was no different from Jet’s full service offering (with all its attendant costs) minus the meals. Two weeks ago, the top management at Jet met to explore the possibility of adopting a two-tiered strategy: A full-service airline aimed at premium business travellers and a newly branded low-cost airline with a completely separate management team and a larger national footprint. There’s still no confirmation yet on whether Goyal has given the plan the go-ahead. “It is like trying to unravel a plate full of spaghetti,” admits a senior executive from Jet, on conditions of anonymity. 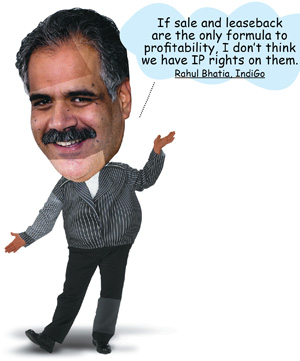 Even as Goyal figures a way to get out of the classic stuck-in-the-middle syndrome, Vijay Mallya, his bitter rival, has his task cut out in his bid to save his airline. He too has much the same dilemma: The dual strategy of running Kingfisher Red, a low-fare airline, along with his full-service airline Kingfisher has completely backfired. With debts of Rs. 7,500 crore and accumulated losses of Rs. 4,500 crore, Mallya is barely able to meet solvency norms. Like Goyal, his team led by CEO Sanjay Aggarwal is making a desperate attempt to adopt a whole new radical game plan. “We’ve looked at both options: To become full-service and low-cost. We believe there are simply too many players who’ve taken positions in the low cost space. We’ve therefore opted to play the game the best way that we know: Remain focussed on the full-service model,” says Aggarwal.

Given the size of Kingfisher’s debts, there aren’t too many folks who’d pay much heed to this strategy just yet. So first, Mallya has to find fresh capital quickly — and time is running out. But even if he continues his search for suitors, a significant part of his revival plan depends squarely on whether his new bet on an entirely full-service model is able to win back the patronage of his business travellers at a fare that’s at a reasonable premium over the low-cost players.

So here’s the tricky question: Who has the best chance to emerge out of the rut? Much like everything in life, there aren’t any simple answers. So belt up, and let’s hit the road to understand the delicate survival plan that two of Indian aviation’s best-known entrepreneurs are plotting.