India's latest social fantasy gaming platform is on the rise 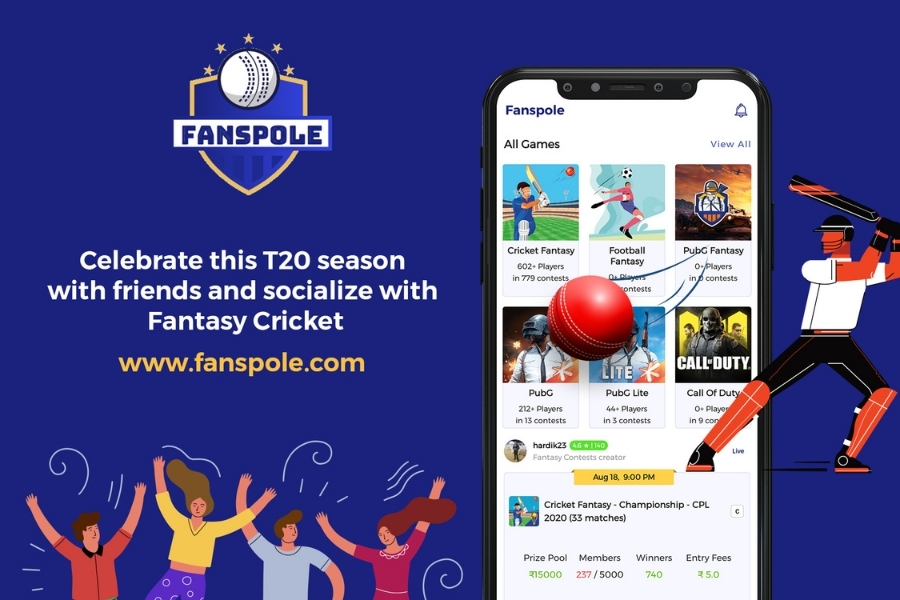 As a global market of around $150bn, Fantasy Gaming has become an outlet for cheer, strategy, virtual sportsmanship and huge earnings. Popularised by devotion to the game and sporting icons, it has fans coming together from across backgrounds and boundaries for thrilling challenges.  We are seeing sports to resume as the Indian Premier League (IPL) is all set to start rolling from September 19, 2020, in the UAE. The Women's T20 Challenge is another cricket event which fans have been awaiting. While dropping over unannounced at your friend's place for a gaming session may not be the best choice during the pandemic, you can more than make up for those missed sessions with the first social network of fantasy gaming like Fanspole.

As India's first community-driven fantasy gaming platform, Fanspole is built by a team that holds a passion for sports and gaming. They offer a platform where you can compete with players across games.  Using this free app is quite simple; all you have to do is first create the contest, where you select the entry fee, member limit and prize structure. Then, you can either post it or share it with friends. It grants you the exhilaration of creating contests within your favourite sport or game and moreover, you're the one making the rules. From cricket and football and Free Fire, you can create your contest in just 30 seconds and share it with your friends to get the game going.

Fanspole offers you the ability to keep contests private or public, allowing you to connect and play with people all over. If public, users can comment, like, and even share your contest with others. Participants pay an entry fee to join the contest, which also has a member limit and ranking system for easy calculation and scorekeeping. Finally, you can also set a prize structure for what the winners get from your competition, adding stakes to their strategy. The app caters to users with an all-round model where interactions go beyond just the challenge.  On the Explore page, you can discover contests posted by others and share them cross-app or within the app via a direct message-like feature. Fanspole also helps you stay in touch with your gaming crew. With its chat groups feature, teammates can engage in non-stop strategies, banter, and masti. Perhaps the most tempting part of it all is making a few bucks while you beat your mates with well-honed gaming skills.

Keeping marketing spend to a nought, the team of Fanspole has managed to bring on more than a million users and 70,000+ contests, a feat they credit to the eager Indian Market. With platforms such as Fanspole, you get to exercise complete creativity and freedom when creating your contests, following users to stay connected and notified about contests, as well as share opinions on the game.

Cash in on Cricket Fever

2020 has, without doubt, changed the 13th season of IPL, shifting the game to an almost completely virtual affair. Because of this radical change, Fanspole has become even more relevant in the world of gaming.  It has brought back the thrill of witnessing a cricket game with the josh that Indian fans all overshare. Much like the real world, here, the Fanspole Auction enables a series-wide game, where you can bid for players and earn points based on their performance. With a feed that displays matches, wins and leagues, and an interface that permits easy management of players, be sure to find an array of contests with engrossed users this IPL 2020 season. The tournaments don't just stop here! As a user, you can take home your earnings by redeeming them via PayTM, Bank or BHIM UPI transfers, giving you a tangible reward to aim for.

The Best Is Yet to Come

What's next for this holistic e-gaming platform? Well, seeing the growing prominence of fantasy gaming, the recently raised capital from investors will take Fanspole to even higher grounds. The team will also be further enabled to give their users even more specialised features. So, for all the gamers out there, hang on, because the fun has just begun!  Disclaimer: This content is distributed by Digpu News Network. No Forbes India journalist is involved in the creation of this content.

Tweets by @forbes_india
Mickael Daussy: Guides you for Expert advice on investment
Obama's memoir 'A Promised Land' coming in November