#CallItOut because #ItsNotOK campaign, raised a call to act against harassment and while the campaign has concluded, it is just the beginning of the drive to erase harassment of women from our society 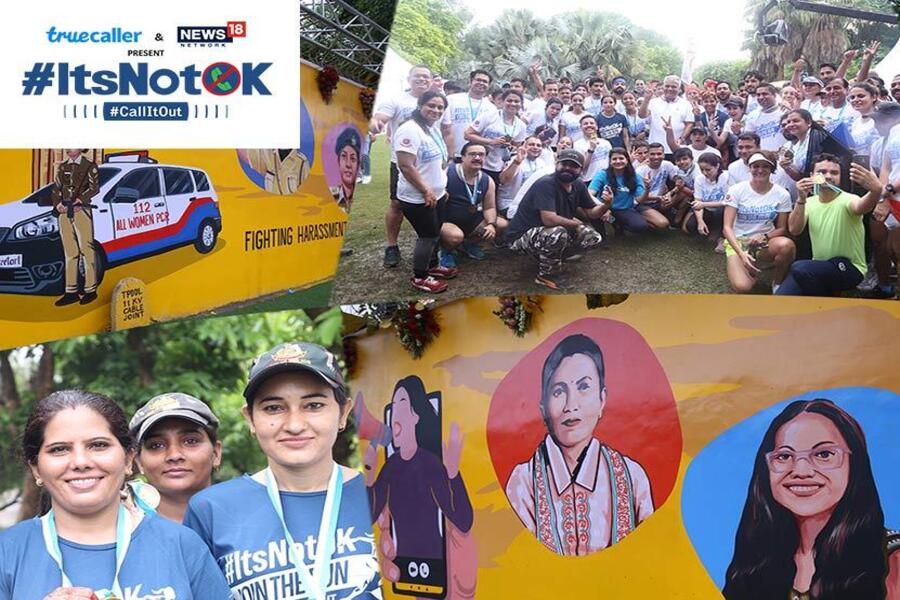 A campaign which underlined the importance of encouraging women to call out harassment concluded recently after championing the cause for close to six months. Launched on March 8, on the occasion of International Women’s Day, Truecaller and News18 Network’s #CallItOut because #ItsNotOK campaign raised a call to act against harassment.
An independent survey by Truecaller had found that one in every five women unsolicited calls or messages in the country. Despite such high numbers, very few women take to reporting their harassers to authorities. Rising to the occasion, Trucaller and News Network 18 joined forces and launched #CallItOut because #ItsNotOK initiative.While endorsing the campaign, shuttler Jwala Gutta went on to recall how she was racially abused and how digital anonymity has given trolls the confidence to harass or tease anyone without facing repercussions. “I think it's very important for women to come out and speak about harassment they face. Keeping quiet or not doing anything about it is an encouragement to people who harass women online and offline,” Gutta added.
As a part of the nation-wide campaign, a Call It Out Conclave was held in Delhi on March 29, focussing on the steps needed to be taken to make the online space safer for women and creating an environment that enabled women to report harassment.
The conclave saw eminent personalities and dignitaries such as the Union Minister of State for Electronics and Information Technology - Rajeev Chandrasekhar, Actor - Raveena Tandon, Special Commissioner, Delhi Police - Shalini Singh, Politician and Social worker - Shaina N. C. among others. There was also a special address by Devusinh Chauhan, Minister of State for the Ministry of Communications. Rakesh Asthana, Former Police Commissioner of Delhi, delivered a special address on how ensuring women’s safety is a key priority.
Besides enlightening the audience on tips to create cyber security awareness, dignitaries also spoke about cyber laws (for women against harassment) and the recourse available to report cases of harassment and future discourse with regards to women’s safety.
The campaign reached the state of Telangana in the month of May, where a round of insightful discussion on various aspects of women’s online safety was led by KT Rama Rao, Cabinet Minister For IT E&C, MA&UD and Industries & Commerce Departments, Telangana. During the discussion, the minister emphasised on the role of men as allies who could expand the boundaries of communatiocation around the issue.
The town hall also saw some of the renowned dignitaries like Satyavathi Rathod - Minister for ST Welfare, Women & Child Welfare, Telangana, Kalvakuntla Kavitha - Leader, Telangana Rashtra Samithi, Swati Lakra - Additional Director General of Police, Women Safety, Telangana, Jayesh Ranjan - Principal Secretary, I&C and IT, Telangana, CV Anand - Commissioner of Police, Hyderabad, Parupalli Kashyap - Former world No. 6 Indian Badminton Player, among others. This townhall focused on understanding and encouraging the pivotal role a male counterpart can play in this unanimous effort against one of the biggest yet less reported menaces of society.
As the initiative struck a chord with every Indian and as it delved deeper into India, travelling from state to state it reached the next state in the month of June  - Odisha. Speaking at the #CallItOut Odisha Townhall, Chief Minister Naveen Patnaik expressed the need for immediate reporting of crimes against women. He further encouraged everyone to come together to combat harassment and improve the state of women’s safety. Besides him, Mr. Tusharkanti Behera - MoS Home, Electronics & IT, Sports & YS, Odisha, along with policymakers, law enforcement agencies, activists, mental health experts, women’s rights organisations, and influencers graced the event.

CM Patnaik expressed the need for immediate reporting of crimes against women. Showing support towards the initiative, he said, “Women should not endure abuse and find the courage to speak up and report harassment. Harassment is a word perhaps we fear and speak very little about it. We tend to forget that we are being harassed and even if we are being harassed we refuse to call it out. During the pandemic, a countless number of women faced online harassment. Let’s come together to combat harassment and improve the safety of women. I thank and congratulate News18 Network and Truecaller for taking such a big initiative with the #CallItOut campaign because #ItsNotOK to ignore the harassment”

Other prominent personalities that lent their support to the cause were Actor and Politician Akash Das Nayak, Social Media Influencer and Actor Niharika Dash, Actor Prakruti Mishra, and Singer Sohini Mishra.

The campaign culminated with innovative initiatives to fight harassment, like the Run to EmpowHER, where citizens, influencers, policymakers and law enforcement joined forces to endorse the cause. The participants ran on a route designed in the shape of ‘ITS NOT OK’, in the nation's capital city. The event also saw the unveiling of #CallItOut wall - a mural that captured stories of brave women who have taken action against harassment and the support of law enforcement towards ensuring safety of women in both the physical and digital spaces.

While the campaign has concluded, it is just the beginning of the drive to erase harassment of women from our society.
The pages slugged ‘Brand Connect’ are equivalent to advertisements and are not written and produced by Forbes India journalists.

Tweets by @forbesindia
China arrests hundreds over banking scandal that sparked rare protests
What makes a museum a museum?