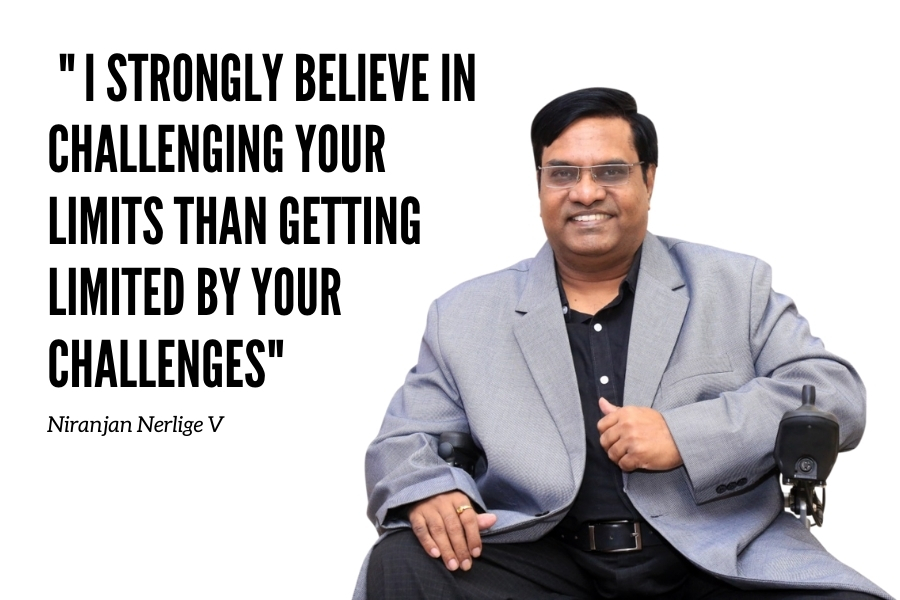 Niranjan Nerlige V’s life has been full of ups and downs. The Rebound Coach, Author, Corporate Trainer, Inspirational Speaker, TEDx Speaker that we know today had his life changed drastically in 1994 when he fell off the 4th floor of his flat back when he was a fresh aerospace engineering post-graduate from the prestigious Indian Institute of Technology, Bombay. Confined to a wheelchair for life, and seventeen operations later, it took him two years of a harrowing stay in a hospital; Niranjan knew it was time to bounce back. Filled with will power, strength, and determination, he set his mind to do something great; to be successful and not let the hardships hold him back. Niranjan didn’t want his legs to decide his future; instead, he knew he had the power to put his brain to the best use and lead his life as normally he could- to achieve what most abled people can. Aiming towards success, Niranjan took up a job in a Multinational Company as a software engineer. Within two years, Niranjan became the Senior Manager and led a team of eight to ten people and was heading the Quality Assurance Department. Soon enough, he received the ‘Extraordinary Contributor Award’ due to his performance and contribution in getting the company a coveted quality certification. He was also invited to deliver a presentation in the company’s headquarters in the Netherlands and talk about how the award was achieved and how the experience had impacted him. Sadly, due to a lack of healthy understanding with the company management regarding his disability in the organisation he worked last, Niranjan had to resign in 2009. Shocked with how things were turning out, Niranjan knew he had to move on and achieve greatness yet again, and we all know- where there is a will, there is a way. Niranjan then decided to follow his greatest passion and decided to become a corporate trainer and teach! His new venture required him to travel a lot, and true, his disability was a challenge, but when the man set a goal, he knew he’d let nothing stop him. It is paramount to know that the man’s career as a corporate professional and corporate trainer spanned over two decades. He founded ‘Exelplus Services Coaching and Training firm’ and has trained as many as four thousand participants. He’s also trained eighty plus organizations in the last ten years in the field of Agile Project Management and has Indian and overseas clients! In 2016, he was invited as a facilitator to a conference in Boston to talk to participants and inspire them. Little did he know, this would be a stepping stone in his journey of becoming a life coach. In the Boston Conference, Niranjan significantly impacted the crowd he was addressing, and he triggered several minds to do something great. This experience equally impacted Niranjan, as he decided to become a Rebound Coach in 2019 and decided to make a difference in people’s lives. He was soon awarded the ‘Rotary Diversity Award- 2018’ for vocational achievements. He was interviewed by channels like Doordarshan, AB News and even went on radio shows to talk about his life. He was featured in many noteworthy magazines and newspapers. He also went ahead and gave his first TEDx talk at DSCE Bengaluru. Niranjan was full of pride to see how he never let his disability decide his life and was now watching everything fall into place. It was a beautiful moment in his life, and he couldn’t help feeling grateful. Niranjan’s book ‘I Choose To Be Unstoppable’ is a personal memoir of his life where he talks about his life journey. He discusses how, despite being physically challenged, nothing stopped him from being incredible, successful, and making his life special. His book became the number one bestseller on Amazon and was awarded by the Critic Space Journal. He was counted in the list of top hundred debut Indian authors. At present, he continues to coach and helps people realize that we all have inner power, but the only challenge is not to be bound by self-imposed limitations. His idea is to make people earn a wonderful life and stand up and write their destiny. He aims to help five lakh people in the coming five years and help them realize their potential and improve their life’s quality and rewrite destiny by focusing on their inner power. Promoting fearlessness and unstoppability- let’s quote him- ‘challenge your limits rather than be limited by your challenges.’ If you are looking for how one can rebound in life, career or business , realize one’s potential and other answers; Attend his live seminars, corporate workshops, corporate key notes or connect with him online to start your journey of unstoppable, bouncing back irrespective of your situation. You can read more about him on his website www.niranjannerlige.com or reach out to him at linkedin in: https://bit.ly/35rgp9L Disclaimer: The views, suggestions and opinions expressed here are the sole responsibility of the experts. No Forbes India journalist was involved in the writing and production of this article.