A Slice Of Bangalore

Indian software companies are hiring programmers in the US

Nandita Gurjar, group human resource (HR) head of Infosys, has been quite busy lately. She and her team have interviewed at least 800 project managers, product architects and software testing professionals in 10 locations in the last few weeks. Her target is to get 1,000 technical people on board in the next 12 months. The Infosys team has been trawling through job fairs and advertising in local media for the openings. Hold on. Don’t start rushing off your resumes to her. Indians won’t qualify for these jobs. These openings are for US nationals alone.  “The US has a vast talent pool and now is an excellent time to bring some of that talent into Infosys’ global team,” says Gurjar. Not quite what you were expecting, right?

Infosys is not the only information technology company looking outside India. Wipro started a new centre in Atlanta last year. There are 200 people working there, mostly programmers and product architects. Wipro is accelerating its plans for hiring for that centre. Pratik Kumar, executive vice-president, HR, Wipro, says that he would like to get at least 750 people onboard in the next 12 months. Wipro also plans to hire 1,000 people in Chengdu, China, in the next year. 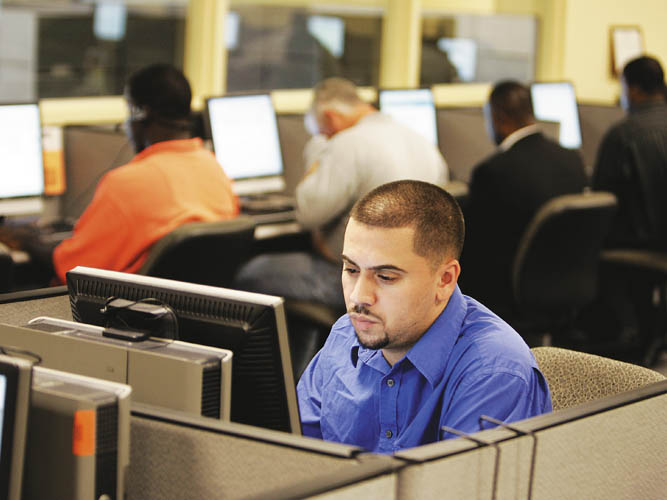 Image: Joe Skipper/ Reuters
Local employees can interact better with clients, share the same culture and understand the problems that come up. Consequently, this helps them to provide better solutions in a shorter period
On the face of it, it’s not a big deal. After all, Infosys and Wipro both have close to 100,000 employees each, and one percent of that hardly looks significant. But consider two facts. One: Net hiring in India has turned negative for Infosys for the first time this quarter and Wipro’s headcount for its IT business is hardly growing. Two: They already have surplus staff (Infosys has a bench of about 30,000 people). In that context, hiring close to 1,000 people abroad becomes significant.
While Indian companies have for long hired local sales people, consultants and account managers, they have always been in customer-facing-roles. They have never really hired local technical talent in such numbers onsite. With India churning out more than 5 lakh engineers every year and the offshore model working well, it was always understood that the technical part of work would be delivered from India.
But, the nature of work that Indian companies do today is different from what they did five years ago. Wipro’s Kumar says, “Most of the work that the industry was doing earlier was project-based, time and material work, which was more about staff augmentation and could easily be done from India. Today the engagement with the client is more sophisticated, which needs more understanding of his industry and technology and needs close proximity to customer”.
Local employees can interact better with clients, share the same culture and understand the problems that come up. Consequently, this helps them to provide better solutions in a shorter period.
What is more important is that hiring locals helps keep the anti-outsourcing protests down in the West. There has been a lot of talk in the US of penalising companies that send jobs offshore. Indian companies, which have almost all their employees in locations in India, could stand to lose from that. Managers in outsourcing companies say that it is becoming tough for clients to take decisions because they feel bad about letting their own people go. So for Wipro and Infosys, “In a small town, creating 700-800 new jobs could have a significant impact,” says Kumar.
With recession in the US and huge job losses, hiring locals has become a lot easier than before. “I can today get a Georgia Tech University graduate for $50,000-60,000 per annum, which is the same amount that I pay to an engineer who goes from India to work there,” says Kumar.
Less than 5 percent of Infosys’ workforce is non-Indian and this might be a good time to correct that ratio. Says Kumar, “At $5 billion turnover, we are no longer a small company and it looks odd that most of our employees are based in one geography.” Both companies are guarded at the moment about saying what percentage of their total workforce would be made of non-Indians, going forward. However in an interview to Forbes India, a few months ago, Infosys Chairman and founder Narayana Murthy had said that close to 30 percent of Infosys workforce over the next few years could come from local markets.
This is also an indication that the industry is getting ready to give up on its fixation of making an above 30 percent margin by hiring cheaper talent offshore. Says Kumar, “You can’t keep squeezing the model till the cows come home”.

10 Years Of Backlash
1998 – 2000
Worried about the Y2K bug, US government increases H1B visas to 195,000 visas per year. Indian IT companies jump at the opportunity and offshoring industry booms.
2001Dotcom bust. US tech companies start laying off workers and send work offshore to reduce costs.

2005
Worried that a shortage of skilled technical labour could harm their companies, CEOs like Bill Gates caution the US government against cutting down on H1B visas.

2007
The US economy starts slowing down. H1B visas cut down from 195,000 to 65,000.
2009
US Senators Bernie Sanders and Chuck Grassley propose legislation “requiring bailed-out banks to hire only Americans for one year”.
2009
President Barack Obama promises to crack down on US companies “that ship jobs overseas”. He says “We have a tax code that says you should pay lower taxes if you create a job in Bangalore, India, than if you create one in Buffalo, New York.”

(This story appears in the 11 September, 2009 issue of Forbes India. You can buy our tablet version from Magzter.com. To visit our Archives, click here.)