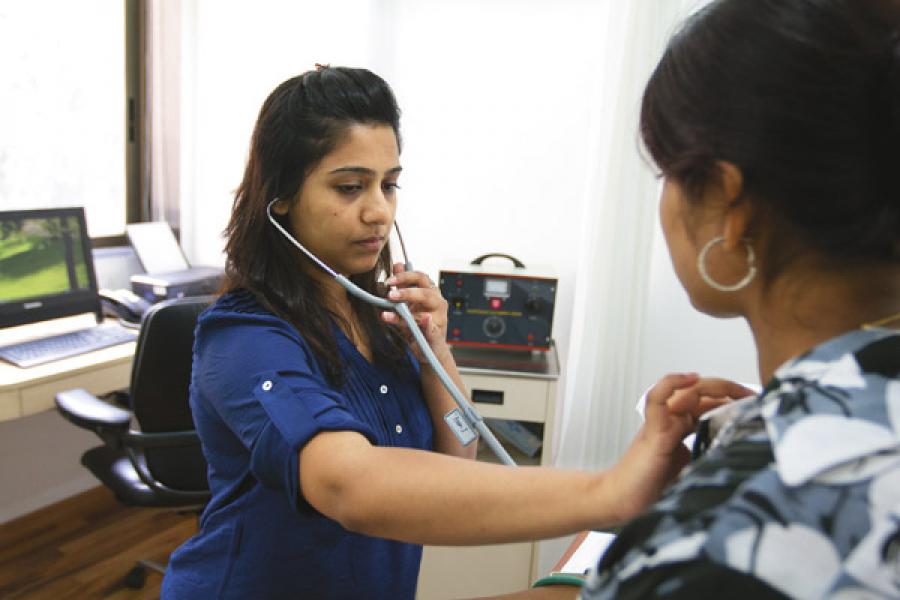 Image: Manoj Patil for Forbes India
HEALING TOUCH Chains of clinics with GPs are making a difference by ensuring that patients don’t have to run around for elementary diagnosis

In Bangalore, The Family Doctor chain has announced an ambitious plan to expand to 30 clinics (up from its existing 13 in the city) across the country.

Such initiatives to prop up neighbourhood clinics mark a trial-and-error approach to revive the dying breed of once-ubiquitous family doctors.

General practitioners lost out somewhere along the growth path of large hospitals. With big money coming in for specialists, being a GP wasn’t good enough. Despite long hours and the perils of being on call 24/7, graduating doctors went for specialisations.

Dr Shantanu Chattopadhyay, founder & MD, NationWide, says, “If you go to a medical college today, probably only three in a class of 100 would like to be general physicians.” In a class surveyed by Forbes India, the number was zero.

Dr Ramnik Parekh, president, Federation of Family Physicians’ Association of India, reiterates the lack of the doctor-next-door. “There are 1.7 million family doctors in India. One-third of them hold MBBS degrees, one-third are ayurvedic or homeopathic doctors, and the rest are unqualified or quacks,” he said.

Dr Rana Mehta, executive director of consulting firm PricewaterhouseCoopers (PwC), estimates there are about 200,000 family doctor clinics
in the country.  That roughly works out to 0.16 GPs per 1,000 people. In stark contrast, Canada has 10 GPs per 1,000.

This is where chains like NationWide, Healthspring, and The Family Doctor are trying to make a difference by bringing together GPs, and ensuring that patients don’t have to run from pillar to post for elementary diagnosis.

If you go to a hospital with a sprained neck, for instance, the outpatient department will straightaway direct you to an orthopaedic for whom you may have to fork out at least Rs 400.

Add to that the expenses for a battery of tests that a specialist is likely to recommend. The Family Doctor, on the other hand, charges Rs 125 per patient, NationWide Rs 200 and Healthspring Rs 350.

The teething problems were there, of course.  Naresh Malhotra, director, The Family Doctor, had told Forbes India on an earlier occasion: “We had priced our consultation fee at Rs 50, but no one came in because they had doubts about us being professionals. Then we increased it to Rs 125 and our patient pool doubled.”

Buoyed by its success, the chain plans to open 100 clinics across the country by the end of 2013.

The Family Doctor keeps
its operating costs low by working out of an area of 400-800 square feet. For stability, they are looking to hire women doctors as they “tend to stick around in the organisation for longer”. The clinic won many fans last year when it alerted civic authorities about a possible outbreak of malaria after it diagnosed at least 11 patients with similar symptoms.

An organised chain of qualified family doctors also substantially eases the burden on large hospitals by detecting primary-stage ailments, and reducing cases that require complicated procedures. NationWide and Healthspring have earned plaudits among the on-the-move professionals in Bangalore and Mumbai, respectively, for delivering quick and efficient services.

One of the ways of achieving this is through their database that tracks patients’ medical records. This plays the role of family doctors who would treat patients from their childhood and know their medical history like the back of their hands. “When people move into a new city, they struggle to find such practitioners. It’s an area we are trying to work on,” said Chattopadhyay.

If numbers are to be believed, the concept is slowly catching on. Healthspring CEO Kaushik Sen said they’ve treated about 50,000 patients across four clinics since September 2011, while The Family Doctor has seen about 60,000 (including repeat patients).

At NationWide, about 1,000 have signed up for annual memberships that include 24/7 doctor-on-call and discounts on lab and pharmacy services.

Why are patients returning to GP clinics? “The key lies in establishing good relationships. Any good GP practice is based on trust,” said Rahman. Doctors are hired on a full-time basis and the chains are doing away with referral fees to ensure they don’t chase monetary benefits.

Ronald Mascarenhas, a 71-year-old from Mumbai, is very happy with the personalised care provided by the clinics.

“I have taken the diabetic plan at Healthspring and pay Rs 9,500 annually. Compared to big hospitals in Mumbai, it works out to be very economical because all my diabetic tests are covered and  extra consultancies for cold, fever, etc are free. These places are good for people who live alone. They are not like general hospitals, where you go for a check-up and then you are forgotten. They even call to check and remind me that my blood test is due,” he said.

Aruna Sakhuja, a 69-year-old entrepreneur, was touched when her physicians from NationWide paid her a visit after she underwent surgery at a large hospital. “No one does that these days,” she said.