The H1B Visa's Fall From Grace 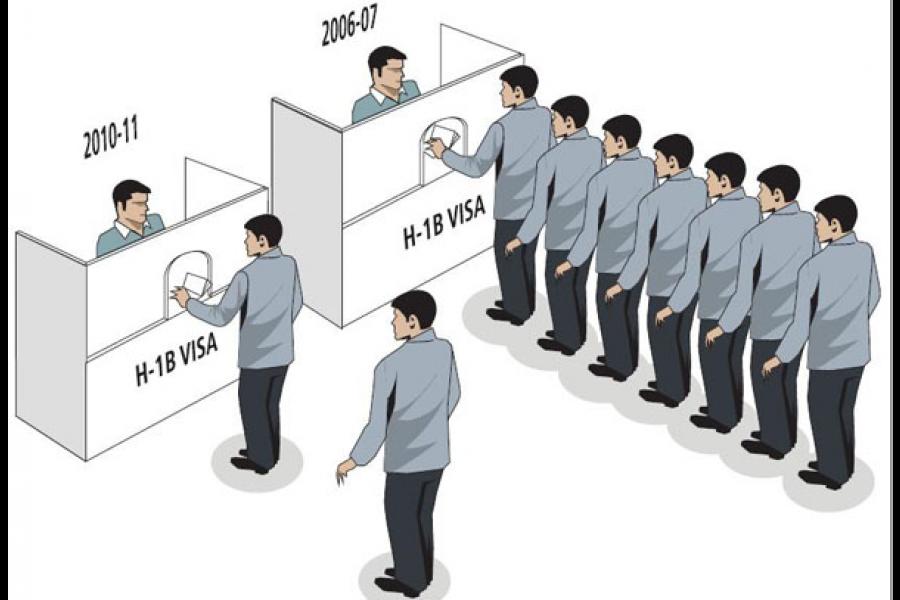 Over the past few years, the H-1B visa has come to symbolise several things: Economic growth, the state of Indian IT companies, the great off-shoring debate and even election manifestos in the US.

But, above all, it has been symbolic of the great American Dream. It has been the ticket that takes you one step short of the Green Card and all
things good.

What changed between 2008 and 2010 that made the H-1B lose its charm among Indians and Indian IT firms?

IT companies have been the largest applicants for the H-1B, which allows US businesses to employ foreign workers in specialty occupations that require theoretical or technical expertise. Such workers include scientists, engineers and computer programmers.

In 2010, Infosys led the pack of H-1B applicants with 3,792 applications. It has remained on top of the list since 2007, with Cognizant, Wipro and Microsoft being among the top five. The top 12 companies in India that applied for H-1Bs in 2010 are from the IT industry.

There are three factors that need to be accounted for between 2008 and 2010. The most obvious is the economic slowdown. The demand for H-1B visas closely follows the demand for IT manpower, which again closely follows the demand for IT services. Not only did the revenues dip to single-digit figures during the financial crisis, visibility of future revenues was also low. Even those who believed that growth would eventually return to the IT sector, weren’t sure when that would happen and they were in no hurry to apply for the visa.

The second is a steep hike — of $2,000 — in the visa application fee (this applies to companies where more than half the employees in the US use work visas). The application now costs between $3,000 and $5,000. The US claimed the extra money would be used to increase its border security. The move would not really affect IT firms based in the US, but would affect those that work in other countries but send employees to the US.
While it would be possible for some IT firms to pass this extra cost on to clients, given the large volume of work, it would be more difficult for mid-tier companies to do so and the extra cost would eat into profit margins.

The third factor has been an increased scrutiny of visa applications, with the US government focussing on Punjab and Hyderabad for fraudulent applications. Visa rejection rates have apparently doubled (even though it’s still in single digits) even among bigger companies. Smaller companies face higher rejection rates.

In the context of increased fees, higher rejection rates, difficulties in getting interview appointments and excessive requests for evidence, a CLSA report by analysts Nimish Joshi, Bhavtosh Vajpayee and Arati Mishra in March 2011 said: “H-1B and L-1 visas remain core to Indian IT companies’ onsite-offshore business model. Procedural or regulatory hurdles here are bound to impact Indian firms… Unfolding events on the visa front over the last few months have been disconcerting.”

Although the economy is looking up once again and companies such as Infosys and Wipro have posted profits for 2010-2011, the recovery has not been as robust as expected. With off-shore jobs yet to match the pre-recession figures, the focus is still on cutting costs.

Companies are doing this by tweaking the ratio between on-site and offshore workers, sending fewer employees to the US and utilising them more efficiently in their Indian offices.
Nandita Gurjar, who heads human resources at Infosys, says there is an issue of growth in the IT sector and also the fact that companies in the US are hiring more people from within the country rather than taking people from India.

“We are working around this by hiring people in the US. Last year, we hired 1,000 people and we think the number would double this year,” says Gurjar. She adds that IT firms are staggering their H-1B applications round the year simply because that is an option. It would not be possible to predict if there will be a drop in the number of applications Infosys makes, she says.

The other option — one that industry leader TCS seems to have settled on — is to take the L-1 route to the US, instead of the H-1B. Visas issued in the L-1 category involve transfers within the same company, and employees do not need to be paid the minimum wage levels of the US, which are much higher than what an employee on an L-1 would be paid.

TCS used to be one of the highest users of H-1B visas till 2008. In 2009, its H-1B visa usage was in single digits, although its off shore-on site ratio is similar to that of other IT majors. The reason given for the dramatic drop is the use of L-1 visas.

If more IT companies adopt this policy, it is the US that stands to lose out on the economic benefits of having on-site workers (contributions to social security alone by Indian firms amount to about $1 billion), rather than cutting down on off-shoring.