No, it’s not a 1990s David Dhawan directed comedy hit film starring Govinda. Godrej No. 1. is a hit though, from the stables of Godrej Consumer Products Ltd. It claimed the number three spot in the toilet soap category for the quarter ended June 2009, eating into market leader Hindustan Unilever’s (HUL) market share.

No. 1 grew at 24 percent for the quarter ended June 2009; it increased its market share (by volume) to 6.45 percent from 5.76 percent in June 2008, says the company citing data from marketing research firm ACNielsen. The rise in percentage terms may not be a lot, but in the fast moving consumer goods sector, even a 0.5 percentage point rise is huge. 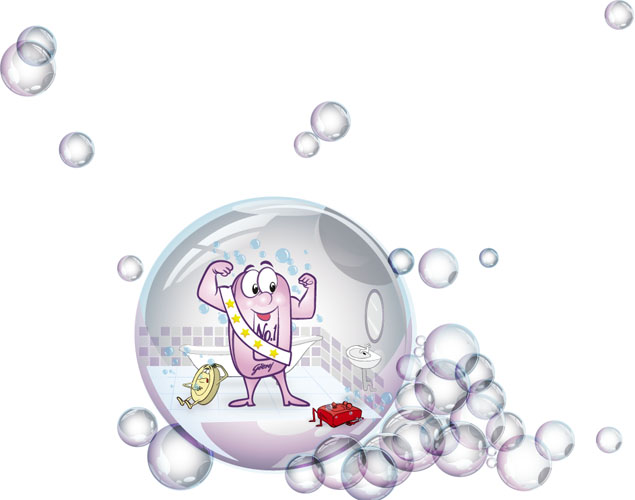 Image: Minal Shetty
It is now the third highest selling soap behind Lifebuoy and Lux. Lifebuoy and Lux, both HUL products and market leaders, saw market share decline by almost 2 percent to 16 and 15.4 percent respectively in the same period. HUL declined to comment for this article.
An analyst with a domestic brokerage says HUL has also lost share to other fast growing soaps including Wipro Consumer’s Santoor and Dettol soaps.
Santoor also stakes claim to the number three spot. The ACNielsen figures show Godrej No. 1 in the number three slot, but only in terms of volume. Since it is a discount brand, it falls to number five in terms of value. Santoor and Dettol take the third and fourth spots on that table.
According to Wipro, which also cited ACNielsen data, Santoor grew at 17 percent for the quarter ended June 2009 and 22 percent in 2008-09. While both Santoor and Godrej No. 1 have grown at a fast clip and taken share from HUL, Godrej No. 1 is among the newer entrants in this space, having been relaunched in 1998 while Santoor was launched in 1984.

Inching Ahead
No. 1 has gained market share but it is more due to HUL’s bad judgement in assessing consumer sentiment. No. 1’s growth figures have come from rural areas. During the peak of the slowdown last year, rural buying was largely unaffected even as urban figures dropped. But rural areas are sensitive to price changes. Prices of palm oil, a key ingredient in soap, started rising and HUL imposed steep price hikes. Godrej waited and increased prices slowly and at a much lower rate than HUL.

“HUL took price hikes when people were getting more price conscious,” says Anand Shah, consumer products analyst at domestic brokerage, Angel Broking. “That is when consumers started to shift.” No. 1 increased its market share in rural areas to 6.7 percent from 5 percent a year ago. It has gone from having 38 percent sales in rural areas to 50 percent now.
Analysts say No. 1’s success didn’t come from the firm’s actions, but Godrej disagrees. “It was a stressful time for us,” says Godrej Consumer’s managing director, Dalip Sehgal. “We asked ourselves ‘do we fiddle with price or quality’ but then decided to maintain our position.”
They drove home the advantage that they had been handed. Once consumers started trying out Godrej No. 1, the brand managers used a combination of clear mass market, rural positioning and a rapid increase in distribution to cement the gains. The company sharply increased its rural distribution network. No. 1 ads now appear only on Doordarshan because it is cheaper and ubiquitous in the areas where they want to be. Spending only on Doordarshan also means that Godrej No. 1’s ad to sales ratio is just 1 percent compared to the industry figure of around 8 to 10 percent.
Godrej is using the critical mass it now has to push its basket of products, market in states where it is less popular and introduce new variants that compete with more expensive soaps. Currently Godrej No. 1 and its hair dye make for more than three-fourths of the company’s sales.
No. 1 was traditionally popular in Punjab and Haryana but not known in other states. It has doubled distribution in Uttar Pradesh in the last two years to compete with large competitors. The Godrej group re-branding campaign also helped. “The company is now being presented very differently and more professionally,” says Pradeep Lokhande, who runs Rural Relations, a rural marketing consulting company. “The shopkeeper is the biggest influencer in the rural area and Godrej now has good relations with rural shopkeepers because they now have a basket of products including hair dye and soaps to offer.”
But No. 1 is not alone in its success. Wipro has also worked with micro finance institutions to promote its soaps in rural areas. “The rural economy has been doing very well because of the high minimum support prices and we concentrated there,” says Anil Chugh, vice president for sales and marketing at Wipro Consumer and Care and Lighting. Santoor is now one-and-a-half times as big in rural areas as it is in urban.
Meanwhile, HUL wants to regain lost ground. With palm oil prices stabilising, HUL has moved to correct prices over the last quarter. It increased pack sizes and reduced prices by up to 15 percent in some soaps. But that will take time to yield results. SBI Capital Market Pritee Panchal says, “It will not be easy for them to gain back share. It [any gains in market share] may come more from regional players than from players like Godrej who are quite aggressive now.”