To start his work, the boss of India's unique identity project doesn't need to look beyond his mobile phone and voter identity card

Now that the government has decided to assign a unique identity to each citizen in a bid to target social security services as well as assure internal security, the 1.16-billion population is waiting with bated breath. Issuing identities to all of them is a laudable, but a very long-term exercise. The day when the last Indian has been given the record will surely arrive, but we need a more modest goal post to start the project with. So, what is the minimum number of identity records that Nandan Nilekani, as the head of Unique Identity Authority of India, can issue without much sweat using the existing databases? 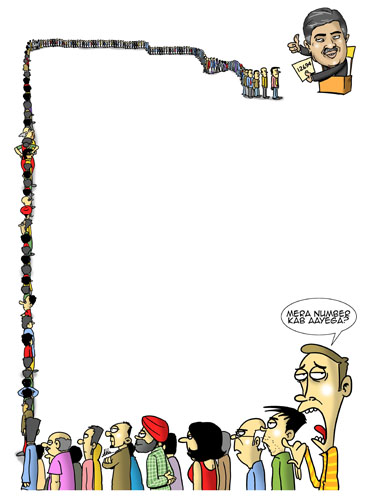 Image: Abhijeet Kini
There are several places Nilekani sahib could be looking for: the databases of PAN card, passport, driving licence, ration card, voter I-card and so on. But the first three cover only a small part of the population and the ration card data is subsumed in voter card data.
The database of voters is a credible starting point. Almost 586 million people have this card. But there is another database which is equally powerful: the mobile subscribers.
“You get 40 percent penetration straightaway and this data has been verified by the Telecom Regulatory Authority of India (TRAI),” says Guru Malladi, partner, Ernst & Young. Mobile connections of 427 million, however, do not mean subscribers. Some subscribers have more than one connection. Research firm Gartner estimates that 10 percent of connections fall in this category. Based on recent Department of Telecommunications audits of leading mobile operator’s subscriber bona-fides, anywhere from 5 to 10 percent might turn out to be invalid. Assume 5 percent as the conservative estimate. Then there are connections being used by companies for their business operations. Add another 5 percent. The number that remains is 350 million.
So now we have two large databases, one with 586 million people in it and the other with 350 million people. There will be common entries in these two databases. You call in the experts at de-duplicating. A de-duplication expert at IIT Bombay, who has worked on government database projects, reckons when such databases are merged and the common entries removed then the size of the database can become half or even one-fourth of the total entries.
Let us assume that in this case the size will be a third of 586 million and 350 million put together. That number is 312 million. If the top 5 percent of the population really isn’t dependent on the services that this new identity scheme will deliver then 300 million is a good target for Nilekani.

(This story appears in the 28 August, 2009 issue of Forbes India. To visit our Archives, click here.)