Why Japanese Steel Companies Are In India

For Japanese steel giants, forging alliances with their Indian counterparts to establish their presence here has become a crucial survival tool 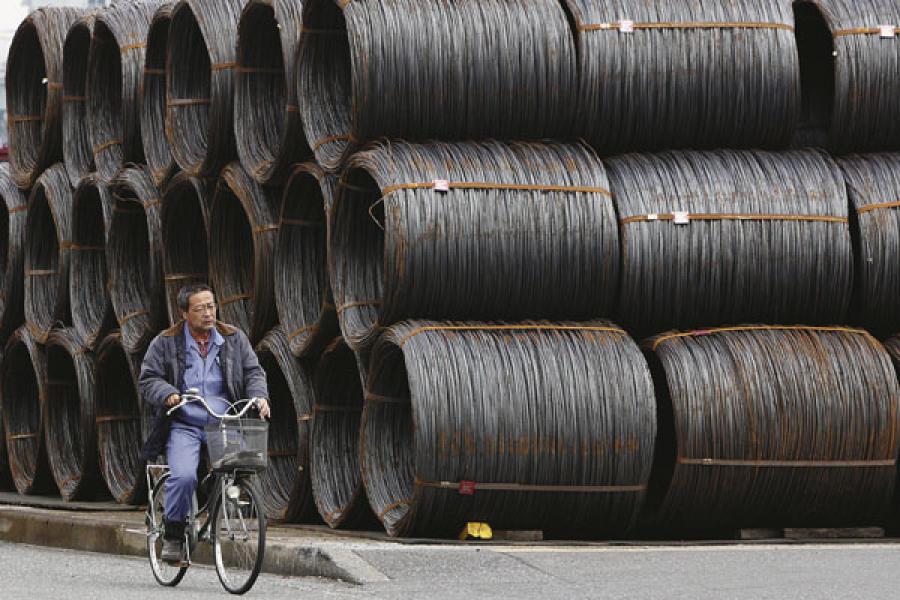 Unknown to many, India had a role to play in Japan’s reconstruction in the years after World War II. Indian iron ore fed Japanese steel mills, the backbone for growth in the country’s construction and auto industries. And, till China’s steel industry took off at the turn of the century, more than three-fourth of iron ore exported from India landed in Japan.

Now, Japanese steel companies are setting up shops in India with increasing frequency. By the end of 2010, the top four steel makers from the Land of the Rising Sun — Nippon Steel, JFE Steel, Sumitomo Metals and Kobe Steel — had made their presence in India official. The New Year started with Kobe Steel forming another joint venture, this time with engineering giant Larsen & Toubro in January. Success in India might play a crucial role in keeping these companies profitable. The India focus is part of Japanese steel mills’ attempt to realign themselves as per industry dynamics post the 2008 economic slowdown. While traditional markets such as North America have been replaced by emerging ones in Asia, supply glut, rising costs and dip in home demand has forced Japanese steel companies to look for solutions.

The country’s largest and third-largest steelmakers, Nippon Steel and Sumitomo Metals, announced a merger proposal in February. The merged entity will be the world’s second-largest steelmaker, after ArcelorMittal. The aim of this merger is to have better bargaining power to source iron ore and coal. Japan doesn’t have either of these natural resources and is fully dependent on imports. Though the mammoth scale of the merged entity means cost savings, will it be able to bargain for a better price from the likes of Vale and BHP Billiton who dominate world iron ore trade?

“Being a bigger entity doesn’t necessarily demand pricing power because the producers are equally sizable,” James Wilson, analyst at Royal Bank of Scotland in Perth told Reuters. So, if the new combine and other Japanese steelmakers want to remain competitive in the new world order in the steel industry, they will need new markets and consumers. Enter, the Indian steel industry — soon expected to overtake China as the world’s fastest growing. 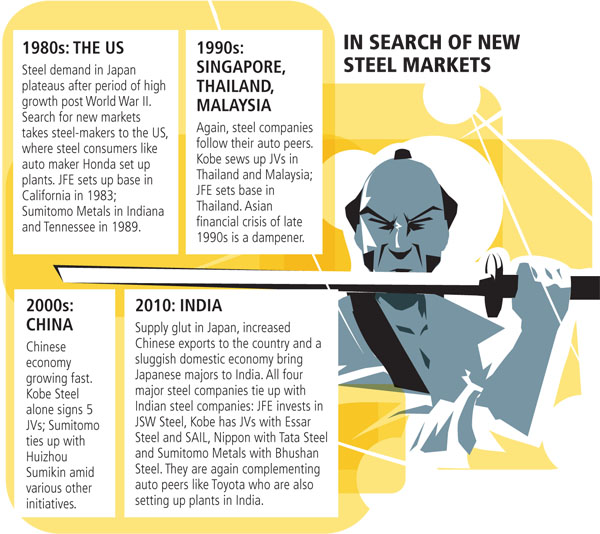 But isn’t every steel firm looking to set base in India? Why are the Japanese special? Known for their technology, especially in making products for auto and white goods industries, the Japanese steel industry has been among the world’s largest. Specialised products give Japanese firms high margins, despite the raw material disadvantage.

But the going has been tough since the economic crisis. Before the merger announcement, Nippon and Sumitomo shares had fallen by 16 percent and 26 percent respectively in the past one year, much more than ArcelorMittal and South Korea’s POSCO. It didn’t help that some Japanese firms fell out of the list of the world’s top 10 producers, yielding to Chinese firms.

Demand for steel in Japan might further contract in 2011 and steelmakers are looking to shift production to low-cost overseas locations. JFE Steel spokesperson Eiji Okumura says its investment in India’s JSW Steel will help “capture the demand”. In 2010, JFE invested $1 billion for a little less than 15 percent stake in India’s largest private steel maker. The year saw a flurry of announcements. Sumitomo took 40 percent stake in Bhushan Steel’s West Bengal project; Nippon formed a joint venture with Tata Steel to make auto grade steel and Kobe Steel signed an ‘umbrella agreement’ with Essar Steel. But why the preference for joint ventures? Says Gary Tsuchida, spokesperson of Kobe Steel: “We specialise in high margin and upper end specialised products. An integrated steel plant has to run at 100 percent capacity to be viable. Our expertise is different.”

“For the Japanese, it is a survival strategy,” says an official from an Indian steelmaker who tied up with their Japanese counterparts to produce specialised products here.

The Japanese firms’ interest in India though, comes at the right time for local steelmakers. Over the years, Indian companies’ product portfolio has evolved. For instance, Vikram Kirloskar, chairman and managing director, Kirloskar Systems, maker of auto components, says, “Imports of auto grade steel in India have come down over the years. Toyota Kirloskar Motors gets most of its supplies from Tata Steel, whose product portfolio has grown over the years.” So, apart from a presence in one of the fastest growing steel markets in the world, the Japanese steel mills’ preference for joint ventures saves them from direct competition with Indian firms.

But, when it comes to highly specialised products, car manufacturers depended on imports. Now, with the technological tie-ups with Japanese firms, Indian steelmakers are better placed to cater to the home auto sector. Steel Authority of India’s (SAIL) tie-up with Kobe Steel will give access to Kobe’s ITmk3 technology that uses low grade iron ore. SAIL has millions of tonnes of iron ore fines, the low grade ore, lying unused. The technology can help SAIL bring down costs and set up new capacities to meet the intense competition from private players.