When an oil refining company spends billions of dollars to build or upgrade a refinery, one of its main concerns naturally is how to get a good return on such a massive investment. In particular, the company would like to make sure that it sells the refinery’s products—mostly gasoline—in markets that would maximize its profit. A guaranteed long-term contract to supply gasoline seems most desirable, but the company may also want the flexibility of pursuing higher profit margins offered by shorter term contracts.

This is the dilemma faced by BP, one of the world’s largest oil and gas companies, as it completes a multi-billion dollar upgrade of its Whiting refinery in Indiana that is expected to increase the refinery’s production by 1.7 million gallons of gasoline and diesel a day. To help BP find the best way to sell the refinery’s output year after year, Chicago Booth professor Dan Adelman and Shanshan Wang, PhD ’11, developed a model that would allow gasoline companies to optimally adjust their portfolio of supply contracts over time, in anticipation of changing market conditions. This model is discussed in their recent study titled “Contract Portfolio Optimization for a Gasoline Supply Chain.” 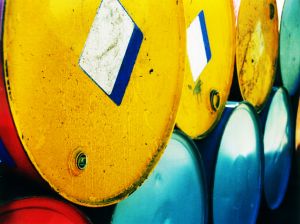 While the work is motivated by BP, it has broad application to gasoline suppliers across the industry, which generates around $300 billion in annual revenue in the United States.

Gasoline, which is produced by processing crude oil in a refinery, is marketed to three distinct channels. The first is the branded channel where gasoline with specialty additives is sold through stations that bear the name of a major supplier such as BP, and are owned by independent firms or so-called branded “jobbers.” A BP jobber is obligated to sell only BP gasoline and BP is obligated to supply all the gasoline that the stations need. The contract typically runs for 10 years but virtually lasts forever, since an industry law called the Petroleum Marketing Practices Act prohibits BP from terminating the contract.

Gasoline also can be sold as a generic commodity through the unbranded channel, such as gas stations at Costco, Walmart, and Safeway. These outlets will typically negotiate a price to buy a specific volume of gasoline from a supplier for one year. The spot market is the third channel, and that is where the major suppliers, unbranded jobbers, and other distributors come together to buy and sell gasoline. Refiners can sell any leftover product to the spot market after satisfying their contract commitments.

The key to maximizing profit is in choosing how much of the refinery’s output should be sold to each channel given the uncertainty in the price and demand for gasoline. “If BP sells its gasoline through an inappropriate mix of channels, then it may either not sell out its capacity or end up selling at a much lower profit,” says Adelman. Indeed, Adelman and Wang find that by adjusting the share that each channel receives over time to reflect changing business conditions, as opposed to a strategy of simply fixing the shares, the company’s expected profit can increase by more than 40 percent under some scenarios.

The Suppliers’ Dilemma
There has been an ongoing debate within BP about how to sell the refinery’s production, according to the authors. One group holds the view that the refinery’s output should be sold through the branded channel as much as possible, while the other group favors putting more weight on other markets. Entering into a long-term contract with branded jobbers seems very appealing, because it lowers the risk that the refinery will be unable to find an outlet for its products. Especially after spending billions of dollars on a refinery, the company may feel more secure if it commits its production to a very stable source of demand.

However, BP might be leaving profit opportunities on the table if it commits solely to the branded channel. Given the volatility in the price of crude oil in recent years and changing market conditions within the different channels, profit margins sometimes may be higher in the unbranded outlets and in the spot market. BP cannot take advantage of such attractive profit margins if it has committed its gasoline to branded stations only. But there also is a downside to relying heavily on the unbranded channel. A short-term contract means that Walmart, Costco, and other retailers are free to shop around after their contract expires. They can easily turn to another refining company to buy unbranded gasoline. “There’s a risk that if you reserve that capacity, you might be stuck with excess capacity,” Adelman says.

Selling in the spot market where gasoline prices are updated in real time is always an option, but buying and selling large volumes can impact prices quite significantly since the spot market is relatively small and illiquid. Thus, if BP decides to sell its leftover capacity to the spot market, then gasoline spot prices likely will go down, which will hurt the company’s profit. Similarly, BP can buy from the spot market if it runs out of gasoline to supply its branded stations, but that transaction will drive its purchase price higher.

Profit margins can vary not only across branded, unbranded, and spot market channels, but also across geographic cities. Likewise, the demand for unbranded gasoline, which is another source of uncertainty, also will differ across channels and cities. BP cannot know beforehand whether demand and profit margins will be higher in the branded or unbranded markets of Des Moines or Chicago, for example. Thus, BP may be better off if it does not commit all of its output to the branded channel, to give the company flexibility to move its products to the most profitable markets.

Choosing Market Shares
Adelman and Wang analyzed a dynamic forward-looking model that anticipates future price movements across the three channels and generates an optimal mix of contracts that maximizes the company’s expected profit. Specifically, the model can tell the company how it should shift its contracts over time between the branded and unbranded channels.

The study finds that a gasoline supplier is much better off if it adjusts the shares supplied to each channel as market conditions change, rather than adhering to a static policy of keeping the same shares year after year. For instance, if BP decides today that it will satisfy 15 per-   cent of the branded market and sell five million gallons to the unbranded channel each year, then it could increase its expected profit by 46.3 percent if it adjusts this share and quantity over time using the study’s forward-looking model. A more aggressive branded market share of 25 percent also results in substantial gains of between 7.2 and 43.3 percent, depending on the initial unbranded quantities, if the portfolio of contracts is rebalanced over time.

Both the conservative and aggressive branded marketing strategies result in a much higher expected profit at different levels of unbranded commitments if shares are dynamically adjusted. This is because of the flexibility to reallocate capacity. Allocating too much or too little to the branded market requires a high volume of costly spot trading to get rid of leftover products or to cover unmet obligations. Thus, finding the right mix of branded and unbranded contracts as business conditions change can reduce the company’s reliance on the spot market and increase expected profit.

Adelman and Wang also developed a retrospective model that BP has recently adopted. The model guides the company’s supply chain optimization strategy for the entire Midwest. It tells BP what it should have done differently if it could do things over again, by calculating the optimal shares in the past for each channel and city. The results suggest how the company might adjust its market shares in the future.

For example, suppose that Cleveland’s branded BP stations got 64 percent of all the BP gasoline that went to that market during a certain period. The company can run the model to find out whether it actually sold too much or too little. If it turns out that the optimal share for the branded channel in Cleveland was only 43 percent because profit margins and demand were better elsewhere, then the company knows that it ought to consider shedding some of its exposure to the branded market in order to increase profit. While BP cannot terminate its contracts with branded jobbers any time it wants to, some jobbers may want to defect to other gasoline suppliers, and at that point BP knows that it is in its best interest to let them go. Companies around the world sell their products through different types of contracts, so the challenge of optimizing a portfolio of these contracts in order to sell at capacity and to maximize profit is not unique to BP. However, it is a topic that has not been discussed much in academic studies. “This paper brings attention to the fact that we can build models to help firms optimize their contract portfolios,” Adelman says.


Dan Adelman is professor of operations management at the University of Chicago Booth School of Business.

Shanshan Wang, PhD ’11, is a former doctoral student at the University of Chicago Booth School of Business.

Tweets by @forbesindia
Book Review: The Tulleeho! Book of Cocktails
Life Insurance In The Slow Lane