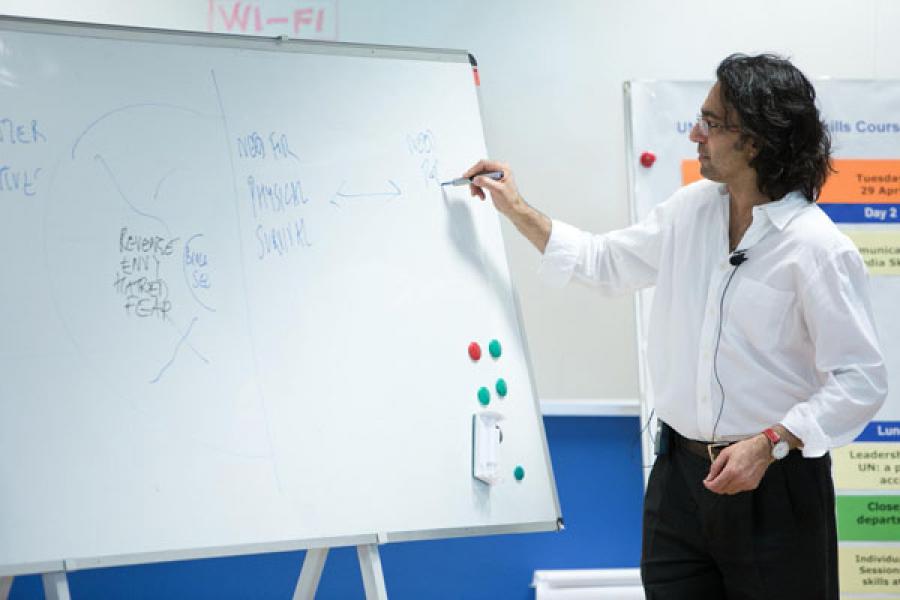 Sudhanshu Palsule, a leading thinker in the fields of Leading in Complexity and Transformative Leadership

In their book, The Social Leader, management theorist and executive coach Sudhanshu Palsule and co-author Frank Gugliemo reflect on what it takes to be a leader in this era of instant knowledge and communication.

Their theory is that the internet is changing business beyond recognition—undermining traditional corporate hierarchies, transforming most organizations into rapidly evolving multipolar networks, and erasing the traditional line between producers and consumers of information.

In this interview Palsule offers his thoughts about how the internet is changing business, how business is likely to change over the next few decades, and what qualities a leader will need to succeed in the 21st century.

Q. What’s the idea behind your book?
A. The Social Age is the world that is emerging around us right now, the 24/7-connected networked world. The dramatic shift has already started impacting the very structure of our organizations.

Q. Why is that happening?
A. If you take a look at that hierarchical structure of organizations, it's based on a few assumptions. One, that the environment in which we operate is always stable. The second assumption is that information is local, and it comes from local sources which are easily accessible. The third big assumption is what I call the “received word”, that the truth is always held by the people at the top who have the authority to tell it to the people below who then have to go and do what they are told. All those things are no longer true anymore, if they ever were.

Whether the authority is the pope or the CEO, organizations that run by that received word are fast disappearing. The traditional military-style hierarchy that has worked successfully for a long time is starting to transform right before our eyes.

You can see this shift in two big recent events. The first happened in 2013, when the Encyclopedia Britannica ceased publication, replaced by Wikipedia. Wikipedia is never going to be as good as an encyclopedia, but the fact is it’s good enough. It's 100% interactive, and that’s what people want. We’re not keen any more on the received word, we want to engage in the participative word.

The second big thing will happen next year: in 2016, Google turns 18. Google entering adulthood means that any 18-year-old anywhere in the world will have no memory of a time when information was not instantly available or when they could not connect to anyone anywhere, anytime.

Q. But does it really matter if we get our information off a screen instead of off the shelf?
A. Yes. Advances in information-sharing change everything. If you look at history, the last disruption that took place on this scale was somewhere around the year 1440, when Gutenberg invented the printing press. In Europe, it created a huge change, because apart from everything else, the Bible could be translated and printed, and that kindled the Reformation.

As big as movable type was, I think that the commercialization of the internet that started in 1995 will be significantly larger. We are not even aware yet of how big this is going to be. It’s a bit like being there in 1440. Gutenberg has invented the printing press and we are somewhere 20 years down the line in 1460 or maybe even 1500 and we still have no idea of what this new world is going to look like.

Q. But you have a few ideas.
A. Yes. For one, big corporations are going to be replaced by smaller, nimbler ecosystems. There's no doubt about that.

I think the traditional form of the company is already getting challenged by a whole lot of people now, especially the Millennials. They are questioning the very model of making money for a bunch of people out there that they don’t know?

Over time, I think the large companies that have been around for a hundred years are likely to disappear.

Q. Simply because of the lack of trust?
A. That’s part of it. The other part is that they are entirely based on hierarchies, and hierarchies will no longer be competitive because global networked communities are faster, more transparent, and more collaborative, which I think are the three founding principles for success in the 21st century.

Demographics will also accelerate this revolution: Over 50% of the world’s population is under the age of 30. But if you look at the top management in most companies, especially in traditional companies, the age of top management is around 50. How will this make sense 20 years down the line? It’s impossible.

Q. What will these brave new companies look like?
A. I think that the dominant themes we see online offer some clues. The biggest is mass collaboration, which we are starting to see on a big scale. If you take a look at the new companies that are coming in or the way in which younger people use the internet, the way social networks work, they are all based on mass collaboration.

Mass collaboration matters because unlike the traditional corporation, it always has two foundations—one is purpose, in the sense that people converge around a common purpose. The other is passion—nothing happens unless a group of people want that to happen. When people with purpose and passion connect with other people who share the same goal and feeling about that goal, you have a global network.

Trust is the second big factor. Whether you take eBay, Uber, or Airbnb, these internet companies are all based on trust, and I think that is one thing that is starting to come back as a major force in the organization.

Q. In many places over the last century, companies served a socialization function as well as an economic function. Companies gave people a set of cultural norms that enabled them to work together, sort of like school. What will replace that?
A. If you take a look at the new companies around us, such as Apple or Google, they succeeded because they created an ecosystem around them. The same model may apply to individuals too: you will find your role in an ecosystem, and that ecosystem will socialize you through your local and global interactions with other people in the same ecosystem.

We worry about what's going to happen when people don’t have an office to go to and when they don't feel a commitment towards one place, but I'm pretty sure it’s going to be replaced by something equally valuable, maybe better. The organizations we built in the last 40-50 years were not based on transparency or trust. I think there are going to be plenty of challenges, as there always are, but I have a feeling that in the 21st century we will finally create an organizational structure that’s on a human scale.

Q. Some people are talking now about guilds coming back in this new era. What do you think of that?
A. In our book, The Social Leader, we talk about the glassblowing community in Italy and use them as an example of how successful guilds used to be. We concluded that in a funny kind of way we will return to that system, not in the way we knew them but structured along the same lines. Guilds make more sense in a networked community than vertical hierarchies within isolated organizations.

Q. One of the darker sides of guilds is that they tend to develop a proprietary relationship to knowledge. I can’t just go and say I’m a doctor and start telling people what’s wrong with them. How do you see this human tendency to develop these kinds of exclusive clubs operating on the internet, which keep sharing more and more information?
A. Guilds do have this slightly elitist hold over knowledge, but I think that’s bound to get mitigated by the technology. Guild 3.0 is interactive, participative, and the people in there are not just content with being members, they are there because they want to participate in the daily work of the guild.

Q. What qualities will business leaders need in this new era?
A. The first one is mindfulness. Now this sounds a bit strange because we normally equate mindfulness with either spirituality or meditation, but it's really about developing our cognitive functions to the point where we are really aware of all the subtle interconnections that take place in our mind and around us.

In the old days, management was supposed to come up with the strategy and the rest of us were supposed to execute that strategy. Soon, every person in the organization will need to be a lot more connected with what’s going on around them, able to pick up information from all kinds of places and work with that information. Leaders will also need a lot of self-awareness because it takes a lot of self-awareness to lead in a context where the orders don’t arrive on an A4 memo.

The third quality is social scalability, the ability to communicate across many dimensions with an individual, with a group, and with an entire network, using technology. Leaders will have to become very good at that. It’s not enough for me to just be able to talk to my team if every member of my team is going to have a point of view and will put what he or she thinks on to Twitter, and that will get picked up and retweeted by another hundred people. You will need social scalability—the ability to talk to one person and to an entire community at once.

Four, cultural fluency. You remember those days when we learned how to shake hands with the Japanese and how to present your visiting cards when you’re in Asia? We’re not talking about that anymore. We’re talking about ways in which a bunch of people all over the world can bring their diversity to solving complex problems. A culturally fluent manager will find ways of leveraging team diversity.

Five, a global mindset. Managers will need macro-socioeconomic knowledge of the world, there’s no question about that.

It’s difficult, but it’s an exciting time to be a leader. Ultimately, I think we’re looking toward the humanization of business—a point where it stops being exploitative, either internally or externally, and actually becomes a guiding force for society.

Sudhanshu Palsule is a leading thinker in the fields of Leading in Complexity and Transformative Leadership and an award winning educator and author.