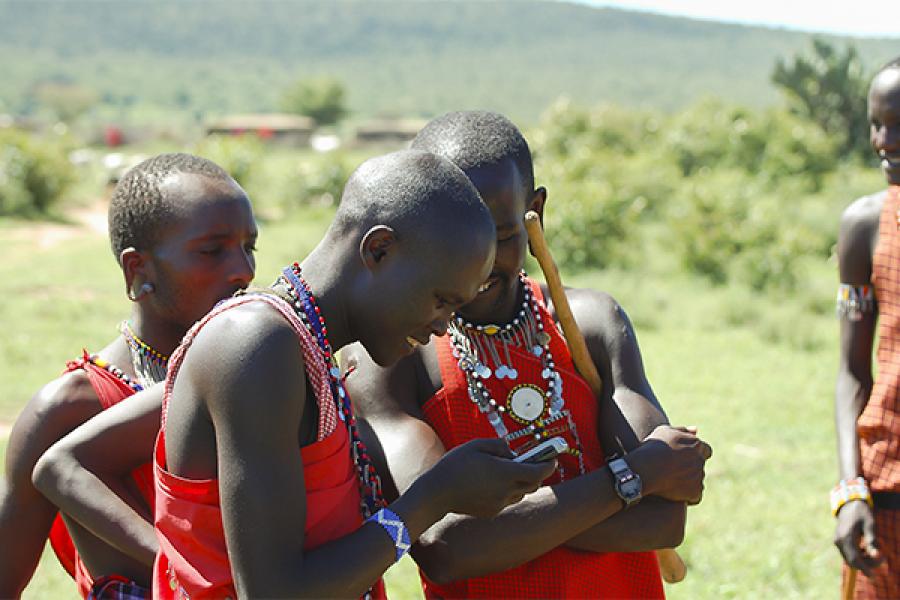 For consumers in mature markets, the financial technology boom doesn’t seem like a very exciting revolution. What they’ve seen so far is technology that shaves a few minutes off an already efficient process, such as being able to deposit a check by taking a picture of it instead of going to the ATM, or being able to buy things with the swipe of a phone instead of a credit card.

But for parts of the world where people must still buy and sell things with bundles of banknotes and stash their savings under mattresses, the FinTech boom is likely to be a major event with a variety of important economic consequences. Low-cost digital services and no legacy infrastructure may allow consumers to leapfrog a hundred years of financial development as neatly as the cellphone allowed them to take a great leap forward in communications, according to Udayan Goyal, co-founder and managing partner of Apis Partners, a London-based fund focused on emerging market FinTech start-ups that has raised $250 million since its launch in July 2014.

End of the ‘Unbanked’
In these younger markets, highly scalable digital technologies are reducing the cost of banking from dollars to pennies, extending the benefits of financial services to almost everyone. A 2015 World Bank report found that between 2011 and 2014 alone, 700 million people became financial account holders, and the number of “unbanked” individuals dropped 20%, to two billion. Overall, the global percentage of adults with a bank account grew from 51% to 62% over that three-year period.

Reports about the evolution of financial services in the developing world often focus on new systems that make it cheaper to transfer money than through traditional money-wiring services. These have been quite popular: the M-PESA mobile phone money transfer system in Kenya is already used by over half the population.

But although transferring money is useful, Aneel Karnani, Professor of Strategy at the University of Michigan’s Ross School of Business, and an expert on developing world finance, says savings accounts will be the real killer app. “Contrary to popular perception, the poor do have a savings rate. It’s not true that the poor don’t save at all—everybody saves…,” Karnani says. “The trouble is they don’t have a mechanism to save. The money is so little that no bank wants to go through the hassle of opening an account for them.”

Without a savings account, the poor run the risk of having the money stolen or of being tempted to spend their savings. The need is so great that Karnani has read of cases in Africa where people gave their money to a rich local villager for safekeeping. “And they would pay him a commission to keep the money for them!” Karnani exclaims.

Such obvious need in the market might suggest rapid growth will follow—and indeed Safaricom, the cell phone company behind M-PESA, has extended the same platform to offer its customers M-SHWARI, a cell phone-based savings account—but Karnani notes that it may take time for many markets to develop the non-financial infrastructure needed to sustain a robust financial services sector. For instance, banks need to be licensed to earn consumer trust. “The complication is a regulatory complication, not a technological complication, because to be a bank, even if there are only small amounts of money involved, you have to have a license,” he says. Other important services such as clearing houses and credit history bureaus are also still unknown in many countries.

East to West
Some observers argue that rapid growth in the east and south may change the direction in which financial innovations spread. In the old days, it may have been true that if you could make it in New York, you could make it anywhere. These days, however, you may be better off starting in Nairobi. “East has taken a lead because there was a huge unmet need. In the West, you simply don’t have that kind of need,” says Jaideep Prabhu, the Jawaharlal Nehru Professor of Business and Enterprise at Cambridge University’s Judge Business School.

Others agree. “We think that the future of innovation in financial services is actually going to come from the developing markets rather than the developed markets,” says Goyal.

In mature markets, investors may notice the differences wrought by FinTech more than consumers do. Accenture forecast in a recent report that traditional banks could lose more than one-third of their market share by 2020, either to new entrants or to smart traditional banks that are quick to incorporate FinTech into their business.

Although the bank may look the same, it may have a radically different engine under the hood, in the view of Matteo Stefanel, who co-founded Apis with Goyal in 2014. Stefanel argues that banking may ultimately be disaggregated into a variety of specialized services.

The part that faces the consumer may not even be a bank in the future: Simple, for instance, a Portland, Oregon, start-up, offers consumers a variety of banking services but Stefanel notes that the company doesn’t actually hold its depositors’ balance sheet. The actual money is held by a partner bank.

Simple uses smart phones to deliver traditional banking services but with integrated budgeting software designed to help consumers save. A highly scalable system, Simple serves 100,000 customers with around 100 employees, being about four times as efficient as its largest local retail competitor, US Bancorp, whose 67,000 employees serve 17.4 million customers—and without physical branches or financial risk.

Evolution, Not Extinction
Although some observers have forecast that FinTech may lead to a massive decline in the numbers of people employed in financial services, the fact that FinTech start-ups and traditional banks face symmetrical problems may create a window of opportunity for banks that move quickly.

On the one hand traditional banks are often too locked into their silos, hierarchy and compliance challenges to see new opportunities clearly, according to Cambridge’s Prabhu.

Start-ups, on the other hand, often underestimate the complexity of the industry. Young companies “go in thinking this is a bit like a consumer internet play and you can virally go out and get customers to adopt your product and have a low cost of customer acquisition but what they very quickly find is that if you’re signing up for a bank, for example, it isn’t just a matter of going to the app store and downloading an app, there’s also something along the way called KYC [know your customer rules], and KYC is complicated in any market,” Goyal says.

Perhaps for this reason, some start-ups and old-line banks are finding that the best way out of their respective dilemmas is to join forces. Simple, for instance, became a subsidiary of credit card and banking giant BBVA in 2014. Less formal alliances are also becoming popular. In London, meanwhile, Barclays sponsors a 13-week business accelerator program for FinTech entrepreneurs, notes Prabhu. The idea is for the entrepreneurs to get a first-hand understanding of the operation and concerns of a major bank while the bankers gain exposure to new technology and fresh ideas.

Ultimately, Goyal expects to see more evolution than extinction ahead in the financial sector. “I don’t think any large institution will ever get fully disrupted,” he says. “The nature of the size of these institutions and how big they are and the fact that they control distribution means that it’s very, very hard to disrupt them.”

Tweets by @forbes_india
Eyeing a break in Bollywood? TalentNext will connect you with the right people
Citi India FY16 net profit down 5.55 percent