Bull or Bear: Don't Judge the Equity Markets Yet

While many global economies may have averted a default here and a decline there, the crisis is far from over. Don’t judge prematurely! 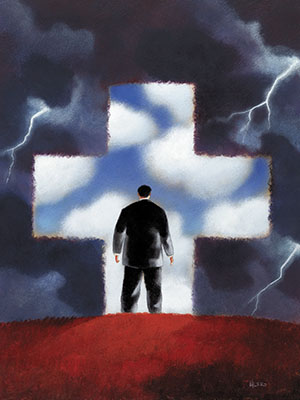 Image: Corbis
UK is at a risk of a triple dip recession and France is struggling to revive a semblance of fiscal probity

The temple bells are clanging with deafening intensity as high priests of the Indian equity market welcome the next great bull market! The wise men nod their heads sagely while talking about new highs for the S&P 500 and the inevitable shift from bonds to stocks in the US.

So what has led to the clamour of the past few weeks? The US has narrowly averted teetering on the brink of disaster with a compromise on the debt ceiling. In Europe, too, good news keeps gushing forth. Despite the pre-election farce in Italy and the rumblings of discontent in Madrid, bond yields in both countries are close to a 52-week low. With banks across Europe starting to repay the emergency funding they received a year ago from the European Central Bank, investors need no further confirmation that the crisis is behind them.

It seems to matter little that the UK is at a risk of a triple dip recession and France is struggling to revive a semblance of fiscal probity. Even the resilient German economy may be at risk as a result of the disastrous electoral outcome for Angela Merkel in Lower Saxony.

Fears of a hard landing in China have receded as well, as indicated by the economic data released in early January. Results in the US are well ahead of analyst forecasts, partly aided by excellent ‘expectations management’ by most of the index heavyweights. The positive earnings surprise has been handsomely rewarded by the markets. The S&P 500, a bellwether index, is set for its best start in more than 15 years. There is ample reason for cheer.

Closer home, corporate results have been encouraging given the backdrop of a difficult macro-econimic environment. Barring a few pockets such as capital goods, infrastructure and engineering, margins have been exceptionally resilient thanks to stringent cost control and disciplined capital allocation. For the first time since early 2011, there appears to be light at the end of the tunnel for public sector banks. The problems with declining asset quality are certainly on its way to being mended, and credit growth should benefit as a result of the recent easing in interest rates and liquidity announced by the RBI.

Above all, Chidambaram’s tryst with fiscal consolidation and attempts to kick-start policy reform is the best possible harbinger of a bull run. The sharp ascent of the markets post his re-appointment as finance minister suggests that investors believe the worst is over and a strong recovery is on the cards in 2013. Even more importantly, the market seems to have shrugged off the election year blues hinting at the faith they repose in the government’s economic steadfastness and maturity in not falling prey to populist gimmickry.

The correlation between stocks and other major markets has also declined, which probably means the influence of top-down economic risk is on the wane. Driven by strong and persistent net inflows from international investors, most market mavens now believe that ‘tail risks’ are insignificant.

The argument is that if we survived the breakup of the Eurozone, chaos in the Middle East, a fiscal cliff in the US and a hard landing in China, thanks to the heightened awareness of leaders such as Mario Draghi and Barack Obama, surely the scenario in 2013 cannot get any worse!

Consequently, there is reason for optimism and resurgent confidence among investors across global equity markets. Most markets are just a hair’s breadth away from their 2008 highs with India being no exception. Should those old highs be broken, the stage could be set for a decisive move northward.

So why worry about what can go wrong? The speed at which the BSE Sensex climbed from 17,500 to 20,000 was not only unusual but also perplexing, given the complete lack of change in fundamentals. Clearly, most investors are willing to plug in significantly higher growth for 2013 on faith, in the absence of any concrete evidence. As the Financial Times pointed out on January 30, “Shares in the Sensex now trade on 16 times earnings, in line with the historical average. But there is still little for investors to sink their teeth into to be convinced that those shares are cheap”. The truly enlightened would dismiss this minor blemish by pointing out that rebased in US dollar terms, the stock market is 20 percent below where it was in January 2008. The belief that the Eurozone has been saved is equally naive. Since 2008, European leaders have hesitated till they have been pushed to the brink by signs of an impending market meltdown. Why will it be any different in 2013? And just in case it’s not, there could be a dangerously sharp correction.

As James Montier [a value investor] says, the best value investors have scepticism as their default option. Scepticism is rare given our brains seem wired to believe rather than question. So, the best defence is to hunt for evidence suggesting that the stocks we wish to own possess a significant margin of safety to protect us against innate optimism.

A number of truly pedigreed companies have been felled by the slowdown in economic activity. The current valuation of such ‘fallen angels’, both in relation to history and in absolute terms, is the reason to dig further. Two names that come to mind are Foseco India (Rs 474) and Sundaram Finance (Rs 480).

The former is a market leader in metallurgical chemicals used by foundries and is owned by the Cookson Group in the UK. It has an exceptional track record of consistently high profitability, disciplined capital allocation and steady growth. It trades at 14 times lower than its CY2012 [January to December] earnings and sports a dividend yield of just below 4 percent. At the current price, which is just 5 percent higher than a two-year low, Foseco offers a genuinely high margin of safety to the conservative investor.

For many, Sundaram Finance defines the gold standard among non-banking finance companies. Quite apart from the fact that it trades at 12 times its current standalone earnings and 2.6 times its book [value], there is a hidden treasure trove in terms of the value of its housing finance, asset management and insurance subsidiaries. All you can do is bless the slowdown in the commercial vehicle industry for this incredible opportunity.

Sherlock Holmes’ insight as a master detective—“The temptation to form premature theories upon insufficient data is the bane of our profession”—must surely resonate with experienced investors!

Tweets by @forbes_india
Immortal Gifts of Love
The Flower Index: What Costs What