Letter from the Executive Editor: Smartphones Are More Abundant in India Than Food

Driven by a Primal need to communicate and explosive entrepreneurship, smartphones are now more abundant in India than food 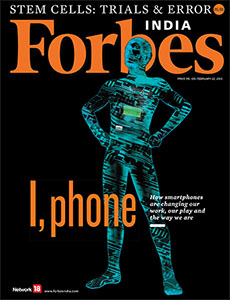 These are the kinds of numbers that bring to mind a story that dates back to the mid-90s. An uncouth, garrulous man was spotted, talking loudly and endlessly on his cellular phone. The device was new and those were times when it cost Rs 16 to the minute, either to place a call or receive one. People around gazed longingly at the object and gaped at the kind of money the man had. The gazing and gaping, though, turned into mocking when the ringer on his phone went off.  He, the story goes, was showing off his cellular phone in what was then a hopelessly poor country.

Because there are so many people who have spotted this man, I suspect him an urban legend. But the apocryphal story is a telling one of the times we live in. Driven by a primal need to communicate and explosive entrepreneurship, telephones, or smartphones as they are now called, are now more abundant in India than food is. It has permeated our lives in ways we thought unthinkable five years ago. It also leaves us with no doubt that our lives are altering dramatically. To understand how, it is important, therefore, to understand what forms these devices take and how they drive our existence.

So Rohin Dharmakumar and NS Ramnath, who work out of our offices in Bangalore and are passionate about technology, took it upon themselves to inspect devices still being prototyped, speak to people from across the world, and research and write a series of stories that will leave you astonished at the times we live in. They also invited Hampus Jakobsson and Chetan Sharma, both of whom have worked and consulted for the most innovative technology companies in the world, to help us understand the implications. Aided with lovely illustrations by the very talented Sameer Pawar, what lies on the pages that follow is a clear vision of what to expect.

May I also urge you to visit www.forbesindia.com? A lot of energies are being invested into building a multimedia experience that will charm you with its variety and depth on themes often ignored by the mainstream. Some of these are anchored by people from reputed institutions across the world; others by our enormously talented team.

As always, a note on what you think of our efforts will be appreciated.