Look for bargains in the current market situation, not ‘safe’ stocks 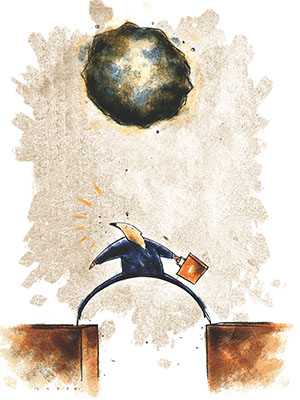 Napoleon is reputed to have said, “Men are moved by just two levers: Fear and self-interest.” Looking back, it seems entirely possible that he was inspired by “tulip bulbs” and their impact on investors. If investors were to approximate rational decision-makers, their assessment of risk would surely be greatly influenced by figuring out how often something bad has actually happened under similar circumstances in the past. Based on extensive real-life experiments, the celebrated psychologist Daniel Kahneman, found that the evidence pointed in an entirely different direction! The results unequivocally suggested that “we tend to judge the probability of an event by the ease with which we can call it to mind.” A renowned contemporary of Kahneman, Prof Paul Slovic, has built on the idea of what shapes risk as perceived by the human mind. As he put it, two factors—dread and knowability—infuse risk with feelings. Dread is all about the vividness with which we can recall an event or set of circumstances. Put differently, dread is all about the potential for catastrophe. “Knowability” depends on how immediate, specific, or certain the consequences appear to be.

There is little doubt that familiarity breeds contempt. Investors consistently under-estimate the frequency and damage caused by common risks while doing exactly the reverse with rarely experienced risks. When you believe that the nature of the risk is comprehensible and you have a way to cope with the consequences, the risk seems a whole lot less threatening than it actually is. Failure to understand the nature of the risk leads to an exaggerated sense of vulnerability. Many otherwise sane individuals think little of driving home themselves after having had a couple of drinks at a party. Yet, quite a few are keen to buy flight insurance at the airport—behaviour that is even more bizarre if they have meaningful life insurance already in place! The data on car accidents as compared to the number of passenger fatalities for commercial air travel is unequivocal. Adjusted for the distance travelled, the probability of being involved in a serious car accident is at least 50 times greater than the likelihood of meeting with a similar fate while boarding a flight.

A popular method of coping with risk is to join a group where all members express similar views. Obviously, everyone could not have got it wrong. Interestingly, social anthropology teaches us that the larger the groups in which animals gather, the more rapidly they tend to flee at the first sign of real danger. Therefore, there is a paradox in the safety of numbers—it’s useful only when there is nothing to be afraid of! At other times the problem is caused by our inability to figure out the odds under conditions of uncertainty—Ellsberg’s Paradox! There are two urns, open at the top but you cannot see inside them. Each urn, say A & B, has exactly 100 balls. In Urn A there are 50 red and 50 black balls but in Urn B you are not aware of the red:black ratio. Urn B contain only red balls or only black ones. I am willing to offer you Rs 1,000 if you pick a red ball from either urn. Most people choose Urn A at this stage. Now I change the rules (exactly like it is in the markets) and offer to pay you Rs 1,000 to select a black ball from either urn. Most individuals still prefer A! Hopelessly irrational because you chose A the first time thinking the odds of a red were higher than for B. By inference, B should contain less than 50 red balls and the odds are it has a higher proportion of black balls! So why do most individuals choose A on both occasions? The only reason is that the ratio is ambiguous for Urn B and you do not wish to appear stupid just in case Urn B happens to be stacked with reds!

Why is all of this relevant to how you should invest in Indian equities in 2013? Primarily because the future is uncertain—given the fragile macro-economic environment—and the effect that has on foreign capital inflows which drive markets in the near term.

Current prices suggest that most investors are very happy picking from the predictable growth stocks—consumer staples and pharmaceuticals—in Urn A. In the process, virtually everybody is willing to overlook the basic fact that the price at which you buy a stock is the single most important determinant of future returns. Seeking safety in stocks such as Hindustan Unilever, Asian Paints, Nestle et al fails to consider the egregious multiples at which these companies trade. By shunning stocks that are high in ambiguity, investors drive them down to bargain prices in a heartbeat—creating opportunities that lead to sizable gains over the long run.

Heightened volatility in global markets and increasing risk aversion will definitely cause international investors to tighten their purse strings. The risk of speculative contagion driven by Mr Bernanke’s desire to go slow on quantitative easing, coupled with the possibility of China going off the boil, is a serious cause for concern. Yet, the most important mental challenge at this juncture is to guard against the danger of the “reassuring” but simple-minded extrapolation of the existing situation into the future. Based on his experiences of the Great Depression, Keynes summed it up perfectly by saying: “It is largely the fluctuations which throw up the bargains and the uncertainty which prevents other people from taking advantage of them. This battle of wits to anticipate the basis of conventional valuation a few months hence, rather than the prospective yield of an investment over the long term, does not even require gulls among the public to feed the maws of the professional; it can be played among the professionals themselves.”

The genuine imperative, in what is truly a highly skewed two-tier market, is to fathom whether the price is attractive or not in relation to intrinsic value. Two stocks that meet the test of an attractive business run by competent management available at a reasonable price are Navneet Publications (Rs 63) and VST Industries (Rs 1,620). Both are available at an earnings multiple in the low to mid teens, deliver return on equity in excess of 25 percent and are run by a management team with a commendable record of rational capital allocation. The wisdom of Henry Thoreau, the much acclaimed American poet-philosopher savant in pointing out, “People die of fright and live of confidence” is worth considering as we come to terms with a world turned topsy-turvy!