Clampdown to Covid-19 lockdown: Kashmir has a lesson for the world

Kashmiri residents have learned, the hard way, how to manage life indoors. Local businesses, however, have been battered twice over, even as they were just emerging from a seven-month shutdown. "It's like playing with fire every time you invest in the business," a handloom merchant says 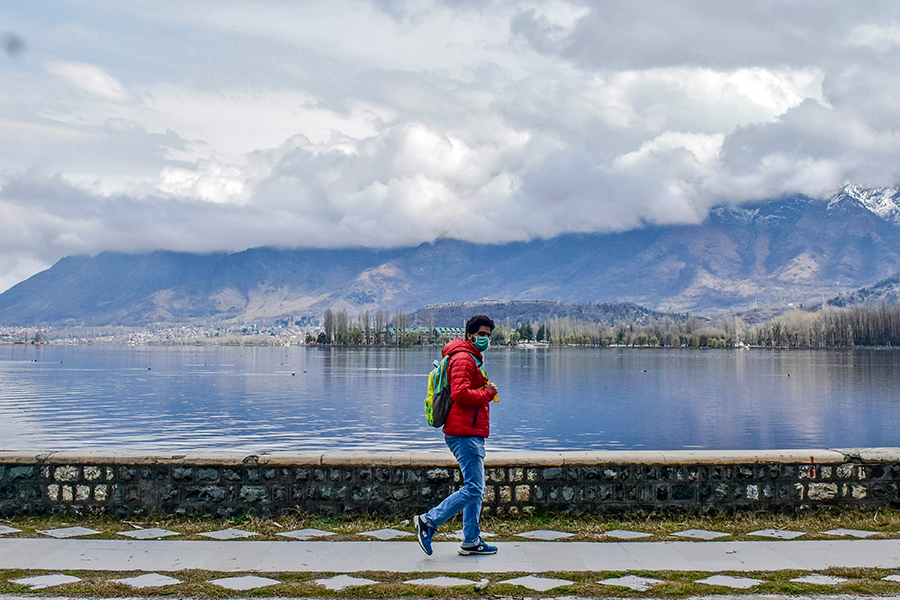 Image: Saqib Majeed/ SOPA Images/ LightRocket via Getty Images
While growing up in one of Kashmir's the oldest districts—Baramulla—Faheem Farooq, 18, dreamed of becoming a writer.
He would be forced to spend more time indoors during curfews and strikes. Movement was restricted to that inside his home, and access to education was difficult. Students of his age, in particular, had to bear the brunt of a volatile situation in Kashmir.

Farooq spent most of his time reading—books of “any genre”, with a penchant for the dystopian—and maintained a daily journal. The world outside bred growing fear and anxiety. Kashmiris, inside, grew resilient, and have some lessons for a world living in lockdown—this time, forced by the fast-spreading novel coronavirus.
“We've lived our lives behind closed doors, in extreme conditions. We’ve lived without internet, which was mandated a basic human right recently,” Farooq says. “The insurgency started in 2008, when I was seven, and it was all new to me. But for my parents, it was a common occurrence to have troops continually patrolling the streets. Over time, we learned the art of killing boredom during shutdowns.”
On August 5, 2019, the Centre abrogated Article 370 of India’s Constitution, splitting the erstwhile state into two Union Territories. Besides, it detained political leaders and imposed a communication blackout across the territory, which lasted seven months.
What’s the difference? Well, a lockdown is marginally better to live through than a clampdown.
“At least the government has our full consent to combat this virus. We are no longer locked against our wishes,” said Numarik Shafi, a student and resident of Baramulla.
Mehnaz Khan, a teacher, was confined to her home from August 2019 until February 23, 2020, when restrictions were lifted and schools could resume. However, now back in lockdown due to Covid-19, she now believes the valley is destined to such a life. “We’re used to it now. How long, we don’t know, but we have to accept our fate. What hurts me the most is that students face an uncertain future,” Khan says.
A student named Afeef Un Nisa, 23, tells Forbes India, that while the feeling of being locked in is not new to Kashmir, students may be better placed this time than during the curfew. “At least we have access to internet, albeit at low speed,” he says.
“We’ve spent much of our lives inside our homes due to unavoidable circumstances. I see no change now,” Mohammad Jamaal, 66, a retiree, added.
A battered economy, hit again
The coronavirus outbreak has also led to inescapable losses around the globe. In Kashmir, the tourism industry, hurt in its peak season, continues to hit local livelihoods. Business in the valley was already bleak through the seven-month clampdown. The deadly virus outbreak has only caused further damage, pushing tourism in Kashmir to the brink of ruin. Many hotels and private firms already had to cut jobs and fold businesses during the clampdown.
Kashmir’s two other famous industries—shawls and carpets—are also suffering. Bilal Ahmad Bhat, 36, a father of five daughters, for instance, is the family’s sole earner. Over time, he has lost sight in his left eye from the intricate weaving. “I have worked in this field for over 13 years. Being able to present our culture has given me purpose. But now, there have been days without no work due to the curfews,” Bilal said.
Similarly, Muheet Mehraj, co-founder and CEO of Kashmir Box, an online retail firm for Kashmiri handicrafts, says the lockdown has halted operations again. “But the difference this time is that we are connected to the internet and we can update our customers,” he says. “From the earlier clampdown, we lost a double-digit crore figure.”
Kashmir is also home to Asia’s largest tulip garden, nestled at the foothills of the Zabarwan range, which sprouted 1.3 million tulip bulbs in 2020. This year, these will wither with no tourists visiting. “In 2019, we received more than 2.5 lakh visitors, from across India and abroad,” Farooq Ahmed Rather, director of floriculture in Kashmir, says. “We were hoping to rake in tourist revenue ahead of the summer this year.”
Kashmir’s horticulture sector involves nearly 7 lakh families and contributes more than Rs 10,000 crore to the region’s economy. Apple farmers, left in the lurch in 2019, lost around Rs 5,000 crore as an industry; they hoped to see a revival this year.
Moreover, 70 percent of fruit trees were uprooted in 2019 because of untimely snow, shows data from Kashmir Valley Fruit Growers-cum-Dealers Union (KVFG). Experts believe it will take another decade-and-a-half to return to the original number of undamaged trees.
The recent initial conservative assessment by the horticulture department revealed that the losses of Rs 2,250 crore to fruit orchards tantamount only to 35 per cent due to natural calamity.
Overall, the Kashmir Chamber of Commerce and Industry (KCCI) reported losses to businesses worth Rs18,000 crore ($2.5bn) between August 2019 and December 2019.
Mohammad Shafi, who deals in furniture and runs Naik Saw Mills in Baramulla’s Kanispora, said that the clampdown and Covid-19 have had a similar impact on his family-run business. The unavailability of raw material is putting 75 percent of business under threat. “The stress is visible with my loss of appetite. That’s affecting my family too,” he says.
Aijaz Mir, 39, a handloom businessman from Srinagar, reiterated that recurring losses have broken the back of the business community across Kashmir. “I had made shawls available a couple of weeks before the Covid-19 lockdown, but I feel I am doomed now. The same happened during the clampdown. In Kashmir, uncertainty looms large. It’s like you’re playing with fire every time you think of investing in the business,” Aijaz told Forbes India.
Tahir Ibn Manzoor is a freelance journalist based in Kashmir. He has previously written for Al Jazeera, Gulf News, ESPNCricinfo, Dawn and other international publications. He Tweets @Tahir Ibn Manzoor