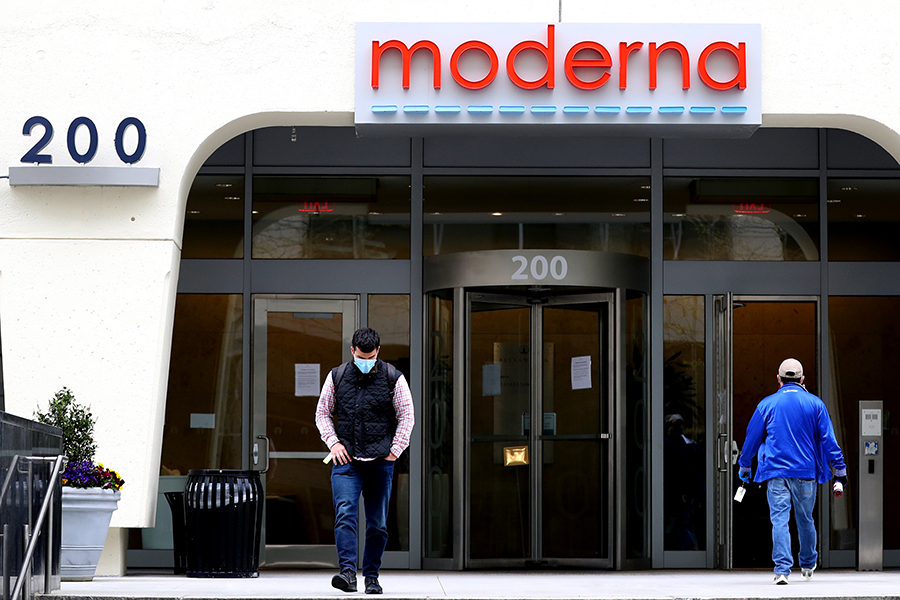 CAMBRIDGE, MASSACHUSETTS - MAY 08: A view of Moderna headquarters on May 08, 2020 in Cambridge, Massachusetts. Moderna was given FDA approval to continue to phase 2 of Coronavirus (COVID-19) vaccine trials with 600 participants. Image: Maddie Meyer/Getty Images

Monkeys given the Moderna coronavirus vaccine and then deliberately infected were able to fight off the virus, quickly clearing it from their lungs, researchers reported Tuesday. The findings do not guarantee that the vaccine will perform the same way in people, but the results are considered encouraging and a milestone in the struggle against the pandemic. If an experimental vaccine fails in monkeys, that is generally seen as a bad sign for its ability to work in humans. This type of study is considered valuable because infecting people on purpose, although sometimes done, is not standard practice. On Monday, clinics around the country began a Phase 3 trial of the vaccine candidate from Moderna, a biotech company based in Massachusetts, with the aim of enrolling 30,000 people to test for safety and effectiveness. “The virus was cleared very rapidly in the vaccinated animals,” said Dr. Barney Graham, the senior author of a report in The New England Journal of Medicine and the deputy director of the Vaccine Research Center at the National Institute of Allergy and Infectious Diseases. Graham’s scientific team collaborated with Moderna to develop the vaccine. Unvaccinated animals in the control group did not quickly get rid of the virus. The vaccine uses a synthetic form of genetic material from the coronavirus, called messenger RNA or mRNA, wrapped in a tiny particle of fat that helps it enter human cells. Then, the mRNA prompts the cells to make a fragment of the virus, which primes the immune system to attack if it encounters the real coronavirus. The study involved 24 rhesus macaques: eight controls, eight given a low dose of vaccine and eight given a high dose. Each animal received two shots, four weeks apart. A month after the second shot, researchers dripped the coronavirus into their noses, an amount comparable to that found in the airways of infected people. This type of monkey does not become very ill from the coronavirus but does become infected. The vaccine did not completely prevent infection but kept the virus from propagating greatly. The vaccinated animals still had some virus in their noses but significantly less than unvaccinated animals did. “If you get a little infection that is cleared rapidly and doesn’t shed very long, it reduces the likelihood of transmission,” Graham said. Lab tests also found that the vaccine stimulated strong immune responses, including high levels of antibodies capable of neutralizing the virus — more than found in people who had recovered from the infection. The lab results were comparable to those seen in people in early tests of the vaccine. “This bodes well for the Phase 3 trials,” said Dr. Angela Rasmussen, a virologist at Columbia University who was not involved in the study. “It’s still hard to make predictions on what it’s going to do in a huge, diverse group of people, based on monkeys, but it’s reassuring that it provides protection in this model. Overall, my verdict is ‘promising but preliminary.’” Rasmussen said that even if a vaccine does not completely prevent infection but makes the illness less severe and cuts the risk of death, it is still a valuable public health measure. Another outside expert, Dr. Paul Offit, an infectious disease expert at the University of Pennsylvania and Children’s Hospital of Philadelphia, said: “It’s always encouraging when things work in nonhuman primates, but nonhuman primates aren’t humans. We really only learn about these products when they’re put in humans.” Graham said, “I think we have a chance of having some protection from this vaccine, but we have to do the Phase 3 trial to find out.” He said the study could also help establish guidelines for evaluating this type of research on other vaccines. “It kind of puts a stake in the ground for what kind of things might be needed to see this level of protection in a nonhuman primate,” Graham said. “We don’t know how it will relate to Phase 3. We’ll find out as data builds from this product and others. We’ll develop a more clear picture of which vaccines work and maybe why they work. But we really need the human data.”