People attending Trump rally cannot sue if they get virus

The rally in Tulsa, Oklahoma, will be Trump's first since the pandemic forced most of the country into lockdown three months ago; the sign-up page includes a disclaimer about the possibility of contracting the coronavirus 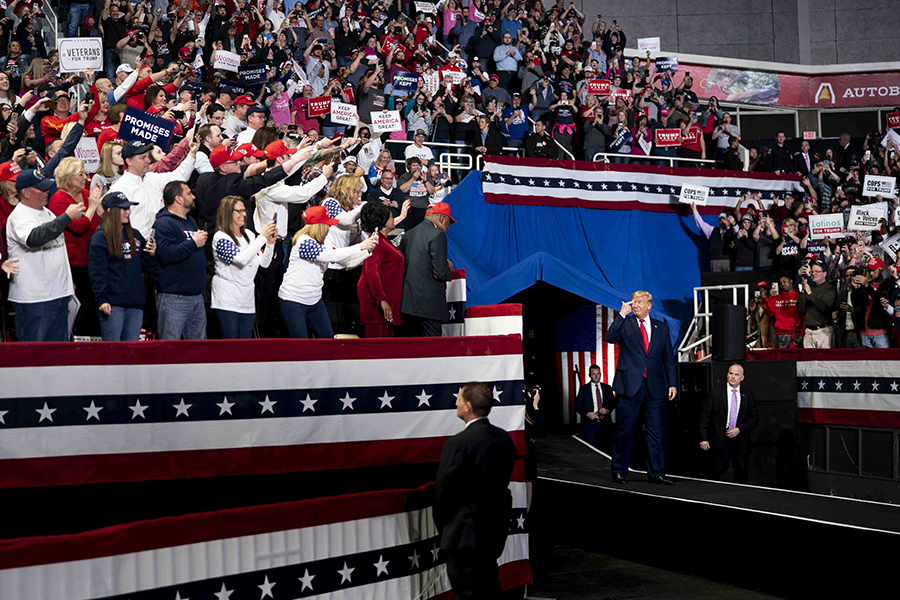 President Donald Trump arrives at a campaign rally at the Bojangles' Coliseum in Charlotte, N.C., March 2, 2020. Trump will return to the campaign trail on June 19 with a rally in Tulsa, Okla., for the first time since the coronavirus outbreak forced most of the country into quarantine three months ago, a campaign official said Wednesday, June 10.
Image: Doug Mills/The New York Times

As part of President Donald Trump’s push for America to return to life as it was before the coronavirus pandemic, he is resuming indoor campaign rallies this month even while health officials continue to say people should avoid crowded places.

But the president’s optimism has its limits: Attendees cannot sue the campaign or the venue if they contract the virus at his June 19 rally in Tulsa, Oklahoma.

“By clicking register below, you are acknowledging that an inherent risk of exposure to COVID-19 exists in any public place where people are present,” says a statement on Trump’s campaign website directed to those wishing to attend the event.

“By attending the rally, you and any guests voluntarily assume all risks related to exposure to COVID-19 and agree not to hold Donald J. Trump for President, Inc.; BOK Center; ASM Global; or any of their affiliates, directors, officers, employees, agents, contractors or volunteers liable for any illness or injury.”

The rally will be Trump’s first since the pandemic forced most of the country into lockdown three months ago, a campaign official said Wednesday. Polls have shown former Vice President Joe Biden, the presumptive Democratic nominee, establishing a substantial lead over Trump.

Oklahoma, a state Trump won four years ago by 36 percentage points, began lifting restrictions on businesses April 24 and moved into Phase 3 of its reopening June 1, allowing summer camps to open and workplaces to return with full staffing.

Trump’s rally in Tulsa, the site of a massacre of black residents in 1921, will be on Juneteenth, a prominent African American holiday recognizing the end of slavery in the United States. Juneteenth has gained prominence as the nation publicly reckons with racial discrimination after George Floyd’s death in police custody.

Of the four states the president announced this week as sites for rallies, Florida, Arizona and North Carolina are seeing more new cases of the virus than they had in the past, and Oklahoma’s infection numbers are steady. Oklahoma had recorded 7,626 cases of the coronavirus and 357 deaths as of Thursday, according to its health department.

The Centers for Disease Control and Prevention still recommends that people avoid mass gatherings and stay out of crowded places. Some health officials have raised concern that the Black Lives Matter protests may help spread the virus, although gathering outdoors is considered safer than doing so inside.

Republicans are expected to move their national convention from Charlotte, North Carolina, to Jacksonville, Florida, after Trump told officials in North Carolina that he would not abide by social distancing measures, according to three senior Republicans.