After a U-turn by the Supreme Court, the annual procession could continue in Odisha, albeit without devotees for the first time in three centuries—even so, the decision met with criticism amid the rising Covid-19 cases in the country 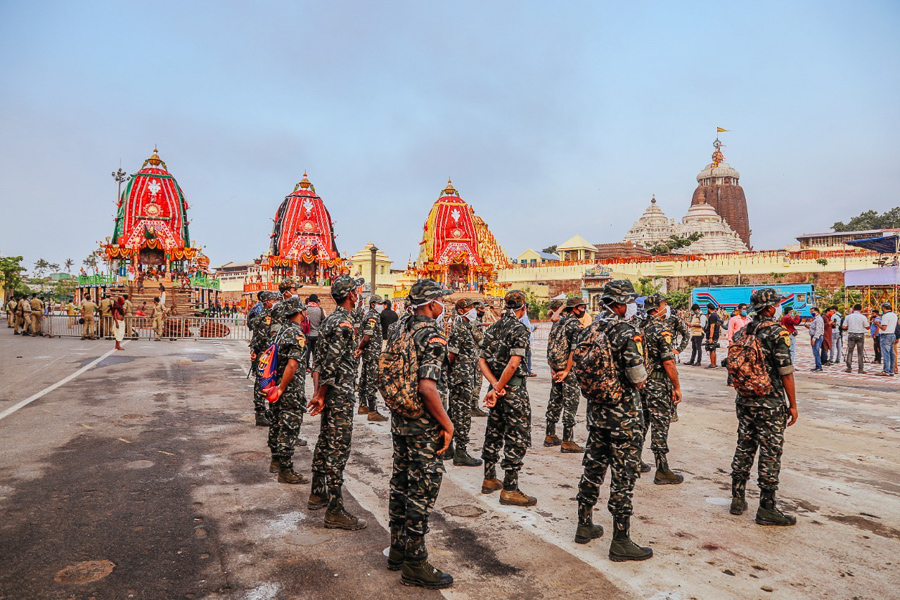 Security forces in a formation ahead of Puri's Ratha Jatra, before the festival begins on June 23, 2020

Puri, globally famous courtesy the Jagannath temple, was put under lockdown, with entry and exit points of the city closed on Tuesday. The Central Government, Odisha government and the Supreme Court (SC) stepped in so the centuries-old tradition, the Ratha Yatra (aka Chariot Festival) went ahead during this pandemic.

The Rath Yatra is an annual chariot procession of the Holy Trinity—Lord Jagannath, Devi Subhadra and Lord Balabhadra—to what is considered Lord Jagannath's birthplace at their maternal aunt’s home, located at the end of the Badadanda (Grand Road). Preparations for the festival begins months in advance, including building new chariots of wood.  So when the SC first ruled on June 18 that the ritual would be cancelled this year, it was met with public outrage, manifested in online reactions too. A day before the festival, on June 22, the SC made a final judgment to allow the procession, with restrictions.  The court order states, “Before we passed our earlier Order (on 18th June) we had suggested to the parties that the procession of chariots, i.e., the Rath Yatra itself, could be allowed to proceed, however, without the general congregation which participates in this Yatra. We were informed that it would be well nigh impossible to ensure that there is no congregation. This Court was, therefore, left with no option but to grant an injunction restraining the Rath Yatra itself.” (sic)  It further added:  “Clearly, any spread of the Coronavirus due to the Rath Yatra would be disastrous due to the large number of persons and the impossibility of tracking all the infected people after they have gone back to their respective homes. Needless to say that it is not possible to screen the medical conditions of all those who converge on the cities for the Rath Yatra…While we do not have the official copy of the gazette itself, we are informed that in the 18th-19th century, a yatra of this kind was responsible for the spread of cholera and plague “like wild fire”. We say this in order to remind the authorities concerned that the situation can become dangerous if the rules of caution are ignored.” Covid-19 safety measures
The city was put under curfew from 9 pm on June 22 June till 2 pm the following day. “People have remained indoors,” says Balwant Singh, Collector of Puri district. “Security forces are screened regularly as part of the Covid-19 related security protocols,” says Odisha's Director General of Police (DGP) Abhay. “More than 50 platoons of police forces have been deployed in Puri district for smooth conduct of the festival.” 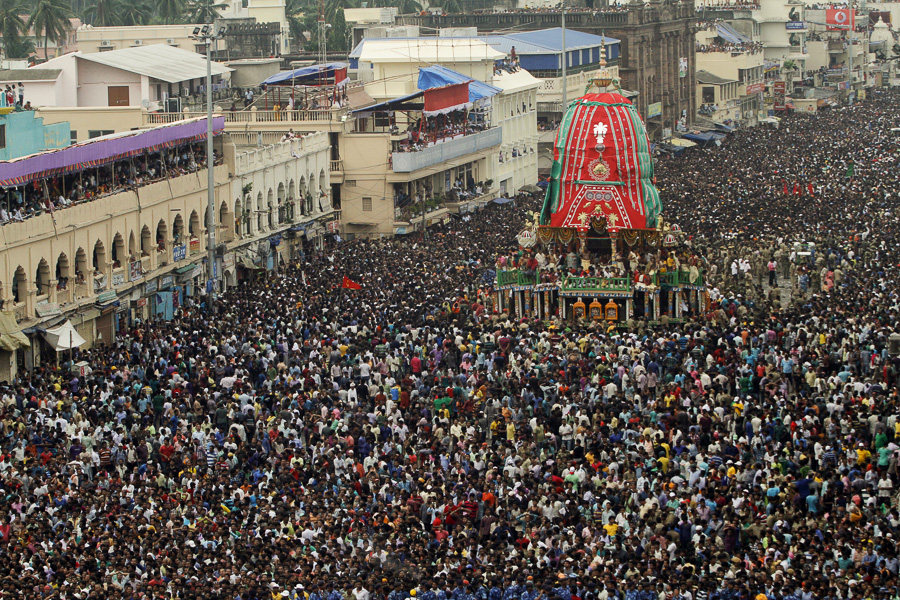 A 2017 image of Ratha Jatra in Puri. The annual festival usually attracts more than 10 lakh people on an average
Image: Biswaranjan Rout/NurPhoto via Getty Images​

Security forces were also stationed along the only route between Bhubaneswar and Puri, to prevent people from entering the city. Trains and any traffic to Puri has been been stopped till July 5.  Historian Surendra Mishra, in a conversation with Forbes India, traces the Ratha Yatra back to 1692, when it couldn’t be conducted because Aurangzeb, the Mughal ruler at the time, had issued an order to demolish the Jagannath temple. No chariots were made that year. This was the last time, until 2020 or 328 years later, when the festival took place minus devotees.   Another first was that the servitors pulled the chariots instead of the devotees. It typically takes 2,000 to 3,000 devotees to pull each 7-8 tonne chariot; instead, 500 servitors were roped in for each of the three, bringing in 1,500 servitors overall. About 1,143 servitors were tested for Covid-19 on Monday before the festival began, of which one tested positive, and was shifted to the local Covid-19 hospital, according to authorities.  The rituals began early on Tuesday morning, at 3 am, with Abakash and Mangala Alati. Unlike Snana Purnima held earlier this month, when Jagannath Temple’s foremost servitor and King of Puri, Gajapati Dibyasingha Deb didn’t participate in the festival due to Covid-19 restrictions, he performed the Chherapahanra ritual in all three chariots on Tuesday, cleaning them with a golden broom.   “Organising the Ratha Yatra was an examination Lord Jagannath wanted us to take,” says Deb. “Most importantly, all the preparations along with the safety restrictions were put in place within 12 hours of the SC’s revised order.”  Temple priests call this year’s Ratha Yatra a ‘miracle’. Daitapati (a title for a senior servitor in at Lord Jagannath’s service) Ramachandra Das Mohapatra says, “This year, Lord Jagannath himself gave us signs that he intended to visit the Gundicha temple. First, after the June 18 court order, the Adhara Mala (holy garland) broke apart. Second, on June 21, the idol moved slightly ahead of its original position, as though the Lord himself was eager to embark on the journey.”  Even so, authorities will have to remain vigilant for the entire duration of the 12-day festival, during which the three chariots will be stationed outside the Gundicha Temple for rituals. Political interest
This year’s festival has found itself raking up political interest too. Union Home Minister Amit Shah, in a tweet on June 22, posted a series of tweets on the issue, including: “As per the instructions of Prime Minister (PM) Narendra Modi, I spoke to Gajapati Maharaj Ji (The King of Puri) and the respected Shankaracharya Ji of Puri and sought their views on the Yatra. This morning, on PM’s instructions, I also spoke to the Solicitor General.” (sic)  He added that Modi intervened as he “not only understood the sentiment of the devotees but also initiated consultations which ensured that the great traditions of our land are observed”.  “Considering the urgency and importance of the matter, it was placed in front of a vacation bench of the Supreme Court and the hearing took place this afternoon, which paved the way for the important decision by the SC. Congratulations to the people of Odisha,” (sic) Shah said in another tweet.  The vacation bench comprising Chief Justice of India SA Bobde and Justices Dinesh Maheshwari and AS Bopanna jointly stated on June 18, “A procession of this magnitude cannot be permitted at the time of a pandemic." This was a hearing between Odisha Vikash Parishad v Union of India. Appearing on behalf of Odisha Government, Senior Advocate Harish Salve informed the Court of the dangers of congregation if the festival is held.  Sources familiar with the situation said that Gajapati and Shankaracharya took strong objection to the Odisha Government’s response to the June 18 SC verdict, resulting in Shah’s intervention.  In the same plea, a reference was made to the high spike in the positive Covid-19 cases post the Tablighi Jamaat congregation in early March. Critics on social media sought justification of allowing the Ratha Yatra during the pandemic yet taking actions against the Tablighi Jamaat participants. Ironically, both the events took place on the either side of the lockdown.   Bharatiya Janata Party (BJP) national vice president and spokesperson Baijayant Jay Panda and a former Member of Parliament (MP) from Odisha said, “Like lakhs of other devotees I am thrilled that the Ratha Yatra could be conducted this year. But the earlier vacillation of the Odisha government between the two SC hearing was not justified.”

Tweets by @forbesindia
Building AI solutions for an inclusive world is the need of the hour
For 105 years, the Hinduja family stayed together. Now they are falling out