For 105 years, the Hinduja family stayed together. Now they are falling out 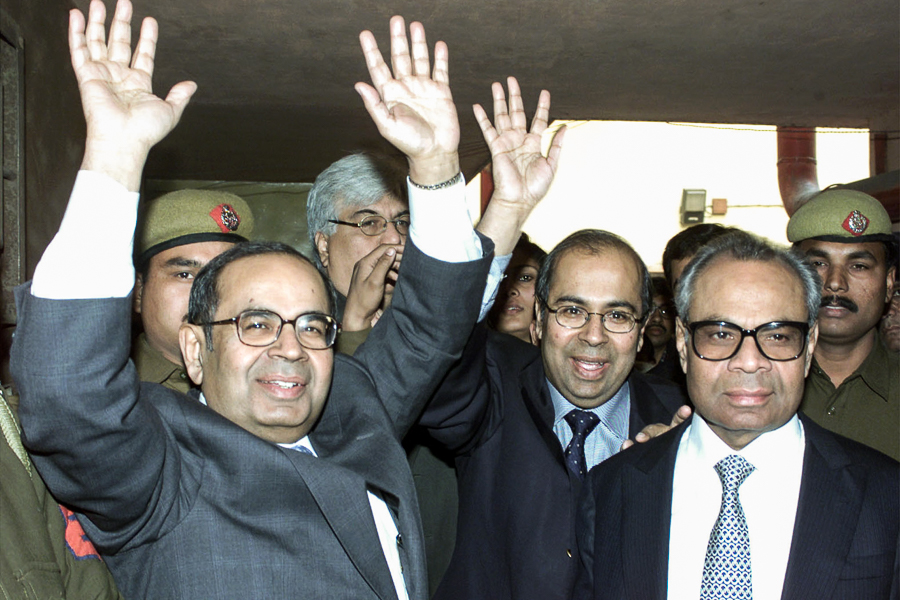 A file photo shows the three Indian born brothers of the billionaire Hinduja family (from left) Gopichand Hinduja, Prakash Hinduja and Srichand Hinduja outside a court in New Delhi in January 19, 2001.
Image: Reuters

It was rather inevitable, as has been the case with many family-run businesses.

Once close-knit, a feud between the four brothers of the Hinduja family, counted amongst the richest people in the world, is finally out in the open, threatening to split their $13.1 billion empire. The Hinduja family empire spans 48 countries across automobiles, telecommunications, healthcare, defence, and financial services among others, employing some 150,000 people.

At the heart of the recent trouble in the family is a 2014 agreement between the four brothers, which said that the assets held by one brother belong to all and that each man will appoint the others as their executors. Now, the eldest and the patriarch of the family, Srichand Hinduja, has contested that agreement and sought the legal route to nullify the agreement. This could eventually decide how the empire is divided.

For over five decades, the Hinduja group has been led jointly by Srichand (SP), Gopichand (GP), Prakash (PP), and Ashok Hinduja (AP), since the group’s founder, Parmanand Deepchand Hinduja passed away in 1971. The brothers have always been looked at as the epitome of sibling unity. They had demarcated their businesses, even as they fought multiple legal battles ranging from corruption to allegations of illegal arms supplies.

The feud between the brothers came to fore after a court judgement on June 23, when Justice Falk at the High Court of Justice in the UK, where the brothers are based, said that the three other brothers, Gopichand, Prakash and Ashok, tried to use the letter to take control of Hinduja Bank, an asset that was in Srichand’s sole name. Srichand has been suffering from Lewy Body disease, a form of dementia.

“In summary, SP seeks a declaration that neither document has legal effect, whether as a will, power of attorney, declaration of trust or other binding document, or alternatively that the documents are revocable and have been revoked,” the judgement by Justice Falk says. “Additional relief is also sought, in particular an injunction restraining use of the documents and an account of the persons to whom the documents have been submitted and steps taken in reliance on them.”

The three brothers meanwhile have said that they intend to battle it out. “It is very unfortunate that these proceedings are taking place as they go against our founder's and family's values and principles that have stood for many decades, especially, ‘everything belongs to everyone and nothing belongs to anyone’,” Gopichand, Prakash, and Ashok said in a statement. “We intend to defend the claim to uphold these dearly held family values.”

From Pakistan to Iran and the UK, via India
The Hinduja group started out In 1914, when Parmanand Hinduja, a 14-year-old from Shikarpur, from the Sindh region in Pakistan (then undivided India), began a commodity trading business that brought him to Mumbai (then Bombay) and later to Iran. Paramanand would import carpets, dried fruits, and saffron while exporting textiles, tea and spices. By 1919, Hinduja had set up an office in Iran and, over the next few decades, built up a business across merchant banking and trading in the Islamic country.

Reportedly, the group had cultivated deep ties with Iran’s royal family and even helped with huge supplies of potatoes and onions from the fields in Punjab, as the oil-backed economy began to grow rapidly. By 1971, when Paramanand passed away, Srichand became the chairman of the group, and by 1979, moved the business from Iran to London after the Islamic revolution. Just a year before that, the group had established a finance company in Switzerland named the Hinduja Bank (originally Amas SA). By 1994, the bank was established as a Swiss banking institution.

Since their shift to Europe, the Hindujas had also been pursuing high-growth sectors in India. By 1984, the company acquired Gulf Oil International Ltd, entering the oil and gas space. In 1987, it acquired Land Rover Leyland International Holdings (UK), or LRLIH, from Britain's Rover Group. At the time, the brothers fiercely competed with Rahul Bajaj, the chairman of Bajaj Auto, who was keen on acquiring Leyland.

In 1993, the group entered the Indian banking space with the launch of IndusInd Bank in 1993, and cable television with IndusInd Media and Communications Ltd in 1995.

Today, the brothers own valuable real estate in London, including the historic Old War Office building in Whitehall, while one of their homes in London is Carlton House Terrace located near Buckingham Palace. Srichand and Gopichand live in London and Prakash resides in Monaco, while the youngest sibling, Ashok, is based out of Mumbai. 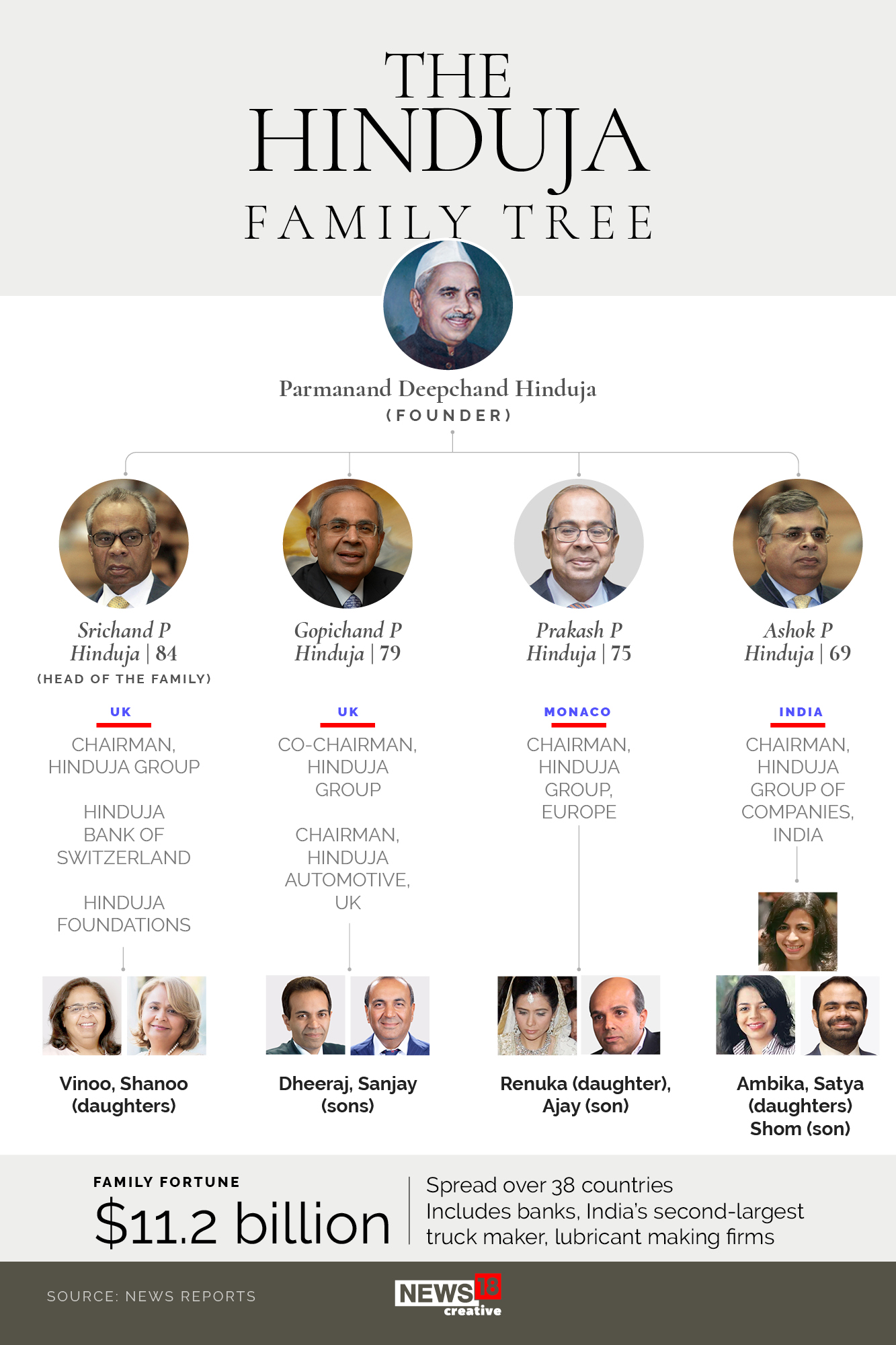 Along the way, the fab four, as they have often been called, has courted controversies including alleged kickbacks from the sale of Bofors weapons, which they have denied and were later acquitted for. It was alleged that the Hindujas were paid a commission to swing the deal in the Swedish company’s favour. They were later acquitted by the Delhi High court in 2005. Today, their empire is worth a staggering $13 billion, with Ashok Leyland, the flagship company, clocking in revenues of nearly Rs 30,000 crore in 2019. Other group companies include IndusInd Bank, Gulf Oil International Ltd, Hinduja Healthcare Ltd, Hinduja Leyland Finance Ltd and Hinduja Global Solutions Ltd, among others.

The dispute
For long, the brothers had remained inseparable.

In fact, they were so close that three of the brothers’ sons had their wedding on the same day in Mumbai, with many guests being flown in from London and Geneva in private planes. The brothers are also strikingly similar in their appearances and choices, with all of them being rather devout Hindus, abstaining from meat and alcohol, with almost identical sartorial styles, going down to their spectacles. Counting among their friends were world leaders including Tony Blair, George H Bush and Margaret Thatcher.

The trouble between the brothers began brewing in 2016, when Srichand insisted that the 2014 agreement held no relevance, that it didn’t reflect his wishes and that the family’s assets should be separated. By 2018, the brothers reportedly tried to wrestle Switzerland-headquartered Hinduja Bank, which is in Srichand’s name, on grounds that he lacked capacity. Hinduja Bank is a private bank focussed on wealth management and private banking, trade finance, corporate advisory services and global investment solutions.

In November 2019, Srichand then approached the Business and Property Court in London seeking a declaration that the letter is revocable. In return, the three brothers contested that Vinoo, SP’s daughter, shouldn’t be representing her father in the proceedings. The court, however, confirmed Vinoo’s appointment.

“I have concluded that the court should exercise its power under CPR 21.6 to appoint Vinoo as SP's litigation friend,” the judgment said. “The defendants also contend that Vinoo has shown a disregard for SP's best interests in bringing the claim, and it was not in his best interests for the proceedings to continue. The defendants may well hold that view, but it seems to me that Vinoo and other members of SP's immediate family, whom he has chosen to appoint as his attorneys, are in a better position to judge this than the persons against whom the proceedings are being taken.”

Meanwhile, even as the feud has escalated in the open, the brothers reckon that the crisis isn’t likely to affect their operations. “We would also stress that this litigation will not have any impact on our global businesses, which will continue to function as they have been,” the brothers said in their statement.

For long, the fab four remained the torchbearers of India’s quintessential family business legacy. Clearly, a century in the business can change that.