White House coronavirus test could be wrong 48% of time

A study found that the Abbott ID Now machine used for testing was less accurate when it processed short, dry swabs 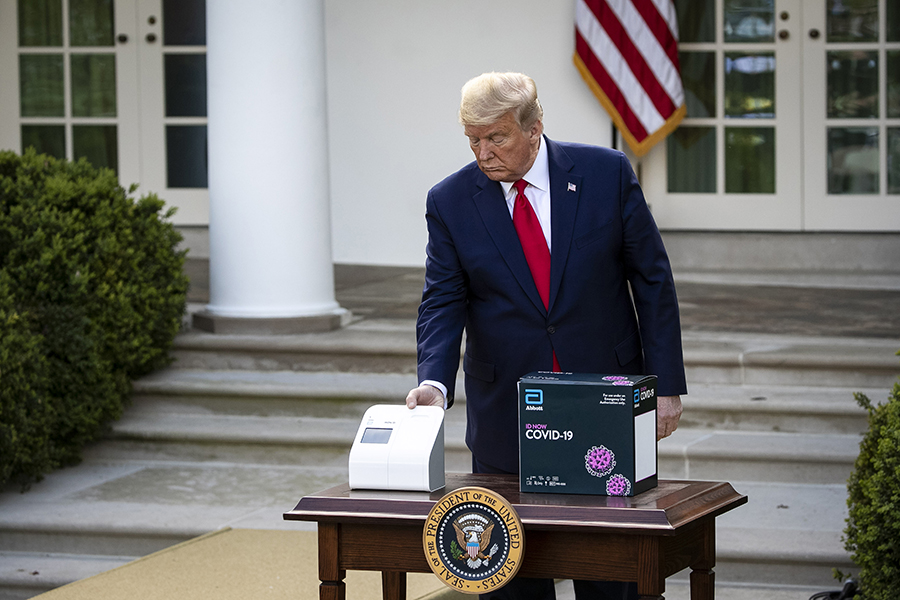 President Donald Trump inspects an Abbott Laboratories rapid testing kit during a daily coronavirus briefing at the White House in Washington, March 30, 2020. The rapid coronavirus test used by the White House to screen its staff could miss infections up to 48 percent of the time, according to a study by researchers at NYU Langone Health. (Al Drago/The New York Times)

(Screening) A rapid coronavirus test used by the White House to screen its staff could miss infections up to 48% of the time, according to a study by researchers at NYU Langone Health. The study, which has not yet been peer reviewed, evaluated the accuracy of the test, Abbott ID Now, a machine about the size of a toaster oven that can yield results in five to 13 minutes. The product, which was given emergency authorization by the Food and Drug Administration in late March, has been enthusiastically promoted by President Donald Trump — it was even used as a prop during at least one news conference. Trump has said the tests are “highly accurate.” A White House spokesman did not immediately respond for comment. There are 18,000 ID Now testing units in the United States, and the company says it has shipped 1.8 million of the kits required for the machine to test for the virus. The so-called point-of-care test is designed to be in doctor’s offices and clinics, and it is being used in drive-through testing sites around the country. In a statement, the company defended its product, saying, “ID Now is an important tool that delivers information where it’s needed most.” Abbott said that its reported rate of false negatives — or missed infections — was 0.02% and that the NYU study’s results were “not consistent with other studies of the test.” “It’s unclear if the samples were tested correctly in this study,” the company said. “In communications with the users of the test, it is performing as expected.” The authors of the NYU study said they evaluated the Abbott test because they were considering using it to test emergency department patients who were suspected of having the virus. The test can use two kinds of swabs: a long, nasopharyngeal swab that is inserted deep into the nose, where it meets the throat; and a shorter nasal swab that can take samples from the nose or throat. A swab is then taken to the testing unit for processing, where it is swirled in liquid, which is then analyzed in the machine. In April, other hospitals and researchers found that if swabs were stored in a liquid solution before being inserted into the machine, the sample could become diluted, producing negative results for those who were infected. Abbott later revised its instructions to recommend placing a dry swab directly into the machine after the sample was collected. The NYU researchers tested how the machine fared when the dry swabs were used. They took two samples each from 101 emergency department patients at NYU Langone Tisch Hospital who were suspected of having COVID-19. One sample used the longer nasopharyngeal swab and was stored in liquid. The second sample used dry nasal swabs. Each specimen was tested on both the Abbott ID Now and another machine, the Cepheid GeneXpert, which takes 45 minutes to yield a result and which has been validated by NYU as acceptably accurate. The researchers found that the Cepheid machine identified 31 of the 101 patients as positive for the virus. But even when the dry nasal swabs were used, the Abbott ID Now identified only 16 people as positive. In other words, 15 patients had the virus, but the Abbott ID Now test said they were negative. Using the dry nasal swab yielded less accurate results than when the researchers used a nasopharyngeal swab that had been stored in liquid. When those types of nasopharyngeal swabs were used, the Abbott missed infections one-third of the time, the researchers said. The White House did not respond to questions about which types of swabs it uses. The NYU researchers said that because the Abbott ID Now machine missed so many infections — including in patients who had to be admitted to the hospital — the technology is “unacceptable in our clinical setting.” The researchers said their study was limited by the small sample size, as well as the one to two hours it took to transport the samples. Although that is within the manufacturer’s recommendation of two hours, the researchers note that the test is intended to be used where the patients are, not in a laboratory.