For this railways employee, fear of Covid-19 is a distant memory

It's back to business as usual for Amarjeet Singh, a parcel supervisor at the Delhi railway station, as a flurry of activity overtakes his day at work 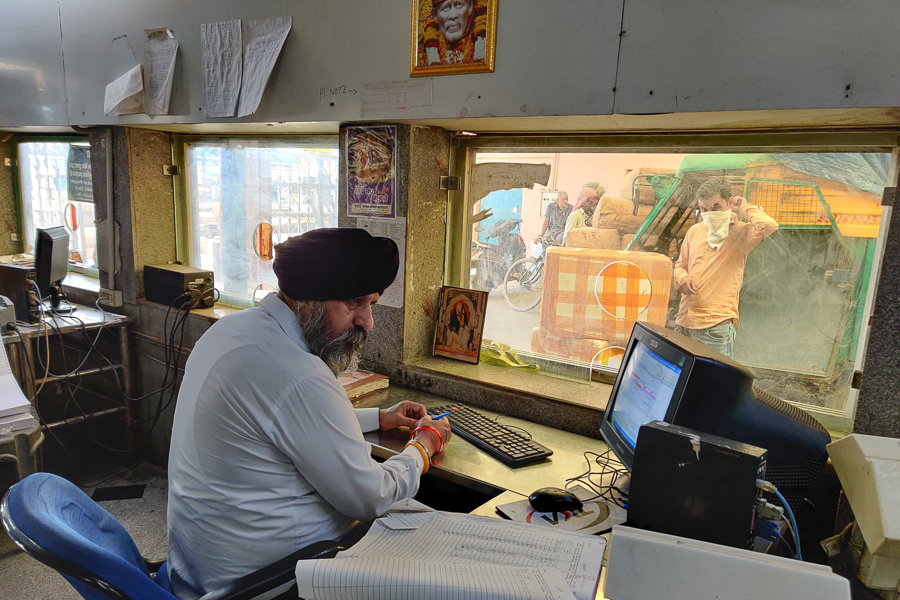 The noon sun at the doorway to the railway parcel booking office in Delhi is seething at 40 degrees; the fan in the section where parcel supervisor Amarjeet Singh sits, punching into a hardy computer, isn’t helping either. "There's no air conditioner and even the computers have toughened up to the heat, like us”—58-year-old Singh isn’t smiling when he says it.

The wall behind him is made of PVC, partitioned from an early-era hall that runs adjacent to the platform, where large parcels are piled up. Labourers move about vigorously as if the deathly virus is a just a memory.

For Singh, the days have now sprung back to the usual ‘bheed’, a term for the tableau of loaded handcarts, autorickshaws, loaders and agents that make a beeline at his window. This begins at 8 am, the hour he lands at his counter, after a reading of the Sukhmani Saheb from the Guru Granth on waking, and a heavy ‘sardar’ breakfast of paratha and sabzi, which makes him forget about food for the rest of the day.

The flurry of activity follows a rhythm all day—the unloading of sacks and parcels for weighing that Singh supervises, and then the same faces craning at his counter window for the receipts and notations he feeds into a computer and ledger. His duty ends at around 4pm, and back home, his evenings are spent with his aged mother, reading and watching the news, and “nothing else in particular”.

The railways came to a complete standstill when the lockdown was announced. About a fortnight later, the goods division roused themselves up to the immediate challenge—the demand for masks, PPE kits and medical supplies rising from various parts of the country. And later, foodgrains too.

The parcel office prioritised these goods for movement at the Delhi hub, which sees about a hundred goods trains a day. During the lockdown, it was merely four in a 24-hour cycle, with skeletal staff. “Whoever lived in Delhi was called in to work,” Singh says. “The government was paying us on time, and we had to be accountable for that.”

Singh was assigned the night shift—midnight to 8 am—for most days, and his ‘scooty’ got him there and back from Vishnu Garden, where he lives with his mother in a house they bought in 1985.

That was a year after his father, a railway employee, was lynched to death by mobs in the 1984 riots.

Labourers rush by hauling carts outside. Fear of the virus is far from his mind. “The virus is going to be with us for life,” Singh says, quietly, “but nobody knows when we’ll leave from this life, right?”

Tweets by @forbesindia
Ten interesting things we read this week
What to binge-watch next, for every kind of person