The testimonials are touching, but the scientific proof is wanting. How did a little medical products company get to be worth $14 billion? 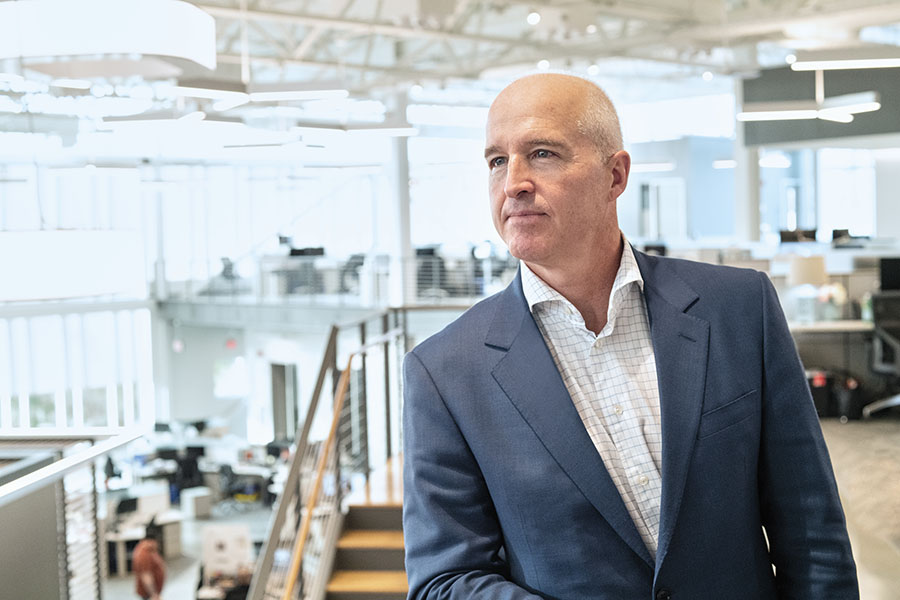 CEO Michael Minogue in Abiomed’s Massachusetts headquarters. He describes the motor of the company’s tiny heart pump as “very similar to a Jet Ski”
Image: Harry Fellows for Forbes

Lisa Cardillo, then 36, and her husband were celebrating their 15th wedding anniversary and had just checked into a bed-and-breakfast when she felt a burning, stabbing pain in her chest. She was having a heart attack.

Cardillo’s heart stopped in the emergency room when she got to the hospital in Grand Rapids, Michigan. Within minutes, doctors used a defibrillator to restart it, but her heart was too weak to push blood to the rest of her body. They put a tiny pump, 6 inches long and shaped like a bent stick, into the left ventricle of her heart. After a few days her heart recovered, and the pump, brand name Impella, was taken out. A year later, “I feel like I’m back to 100 percent,” she says. “You would not even know what I’ve been through.”

Stories like that demonstrate how Abiomed sells five varieties of the $23,000 Impella pumps. (The price also includes care and support.) The Danvers, Massachusetts, company reported net income of $112 million on revenue of $594 million in its March 31 fiscal year, almost all of it from Impella. Michael R Minogue, Abiomed’s chief executive, tells how in 2016, when enough patients had been treated to fill Boston’s Fenway Park, a patient and his doctor threw out the first pitch at a Red Sox baseball game.

“My best day in the office is seeing patients,” says Minogue, a West Point grad with an engineering degree. “And on my worst day I pull out my book with all the patients’ stories and I read it.”

The stories are great. But some doctors, even ones who use the device, think the evidence the company cites to support its use isn’t strong enough. For patients like Lisa, “the Impella may not be of any value,” says David Brown, a cardiologist at Washington University in St Louis. “In the history of medicine, when we’ve assumed things work without adequately testing them, we frequently have felt foolish because when it was ultimately tested it was found not to work so well.” Robert Yeh, a cardiologist at Beth Israel Deaconess Medical Center, vividly remembers patients who he suspects would have died if not for the Impella, yet he says he lacks definitive proof of the pump’s value.

Proof would require a controlled trial, with some patients randomly getting the pump and others not. Such a trial, says Minogue, has been impossible in the US, since doctors won’t play Russian roulette with their patients. Wall Street doesn’t care about trials. Abiomed’s market value of $14 billion is 74 times trailing earnings.

Abiomed was founded in 1981 to develop an artificial heart. That device was approved in 2006 but was rarely used and is no longer for sale. Minogue, a Bronze Star veteran of the Gulf War, arrived in 2004 after 11 years at General Electric.

The artificial heart, Minogue says, was “a science fiction product”. Another device, a partly external heart pump, generated $30 million in sales at its peak.

What he wanted was something that could help the heart pump and recover, without having to replace the damaged organ. He found it in the Impella, a device made by a German firm and used on patients in Europe. In 2005 he bought the startup, which had nearly gone bankrupt, for $2 million in cash, $45 million in Abiomed stock and $29 million in payments that would be owed if the device reached the market.

The Food & Drug Administration cleared Impella for the US in 2008 for temporary heart support, and sales growth has been in the double digits since 2014. “I challenge you to find me a story with those same growth characteristics,” says Raj Denhoy, a medical device analyst at Jefferies who has been following Abiomed for many years.

The pump looks like a striped grey pen with a pigtail on the pointed end. It is inserted into a patient’s heart via a wire threaded up from the groin and remains connected to a bedside console. It’s meant to pump blood out to the body continuously, not mimicking the heart’s pumping motion. Once the heart recovers, the pump comes out. Different versions of the Impella can support the right or left side of the heart.

About half of Impella sales are for use during procedures to open up blocked arteries with tiny metal tubes called stents. For this use Abiomed conducted a randomised study comparing Impella with another device in 448 patients and received approval from the FDA in 2015. The other half of sales is for patients who have had a heart attack and aren’t getting enough blood to their bodies. For this use, the main study, comparing Impella with a balloon device, comprised only 26 patients. There was also data from hundreds of patients who had received the device as part of their care but were not part of a controlled study. That earned Abiomed an FDA approval in 2016.

Not good enough, says Will Suh, a cardiologist at the University of California, Los Angeles. “The highest-quality evidence is lacking.” He still uses the Impella, because he believes he’s seen it work in certain situations, but points out it can cause bleeding complications. “I’m amazed at such an expensive device being used without a little bit stronger evidence,” says Martha Gulati, chair of cardiology at the University of Arizona.

If Abiomed doesn’t have the data doctors want, Minogue says, it’s not for lack of trying. He says the last of the seven times Abiomed has attempted a US trial, in 2007, 58 hospitals participated but only one patient enrolled. “It is a very difficult, logistical and ethical thing to do,” he says. “Would you want a family member randomised?” Hospitals in Denmark and Germany are enrolling patients in a randomised controlled trial, but that isn’t expected to be completed until 2023.

Part of the reason it’s so hard is because often patients’ hearts have stopped and “you really can’t get consent ahead of time”, says William O’Neill, a cardiologist and Abiomed consultant at Henry Ford Hospital in Detroit who was an early adopter of Impella. His study of 104 patients treated with the Impella shows 77 percent survived to leave the hospital, versus a 50 percent historical survival rate. Clyde Yancy, chief of cardiology at Northwestern University’s Feinberg School of Medicine, says it’s all about selecting the patients who have the best chance of being helped. “The Impella is definitely a step forward. It’s less than a perfect device, but better than what we have had before.”

Minogue, as you’d expect, has an answer to complaints that his company’s device is too expensive. He pulls a red plastic charity band on his wrist given to him by an Impella patient. The white lettering has come off from wear.