Carbon3D: The shape of things to come

Carbon3D is the latest hype-beast in 3D printing, but it has the best chance yet to reinvent manufacturing 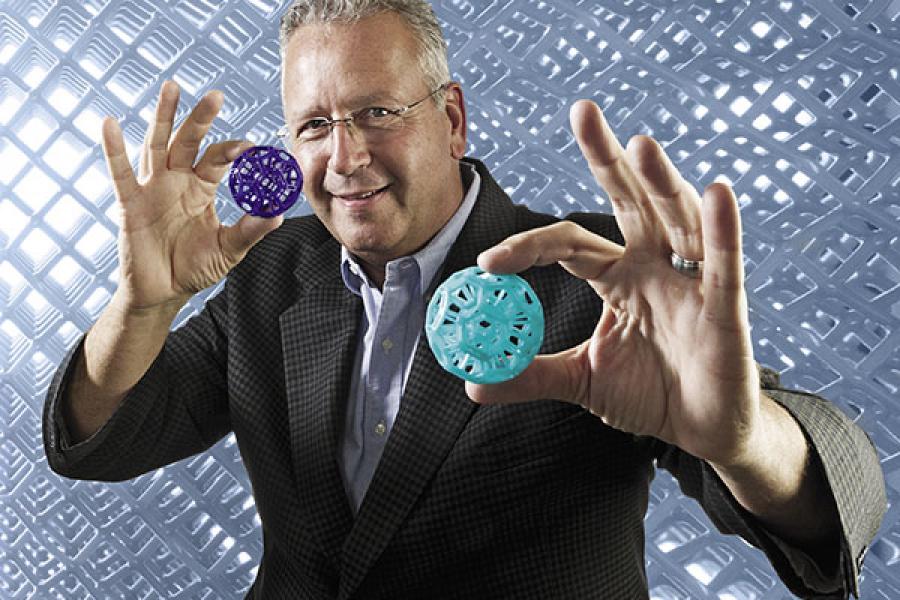 Kirk Phelps wants to change how things get made. He holds up a floppy yellow circle of plastic, a sealing gasket for a generic automotive engine, and explains how this gasket is limiting human creativity.

“If you want to make a new kind of engine, you don’t get to design the engine from the ground up. You actually go to your gasket supplier and ask what standard gaskets are available and you design the engine around it. This is backward,” says Phelps, a 33-year-old product designer who helped develop the multitouch on the iPhone.

That frustration led him to take the job as head of product development at Carbon3D, one of the hottest startups to come along in the emerging 3D printing industry. The promise of 3D printing is the ability to produce a solid part on the spot based on any digital 3D file, freeing engineers to build their dream engine. While some of the highest-end machines can precisely print small-batch items such as hearing aids and artificial joints, the vast majority of 3D printers in use today are slow and capable of making only trinkets and small prototypes. The early hype around 3D printing peaked a couple of years ago, and now shares of the two big publicly traded printer manufacturers, Stratasys and 3D Systems, are 80 percent off their highs.

Carbon3D is reinjecting excitement into the field. Its CEO and cofounder, Joseph DeSimone, a 51-year-old entrepreneur and former chemistry professor from the University of North Carolina at Chapel Hill, came up with a new way to print objects in 3D so quickly and precisely that Sequoia Capital partner Jim Goetz (the sole backer of WhatsApp) led a $11-million Series A round and lured him to Redwood City, California from his tenured chair in Chapel Hill. The company has since raised more than $140 million, including a $100-million round in August led by Google Ventures. Its valuation is already estimated to be above $1 billion without releasing anything more than a product for early customer trials. “The industry is dominated by mechanical engineers who print two-dimensional objects up layer by layer,” DeSimone says. “Let’s not do this layer by layer—let’s grow these parts.”

Most 3D printers use a technique known as fused deposition modelling, which is basically a hot-glue gun controlled by a robot arm that zig-zags back and forth depositing layers of plastic to make a solid object. A Carbon3D machine pulls a solid object from a small tub of liquid plastic—akin to the way the killer robot in Terminator 2 lifted itself out of liquid-metal puddles. It’s a variation of a decades-old technique called stereolithography, or the use of light to solidify liquid plastic. DeSimone’s contribution as a chemist was to replace the bottom of the tub with a pane of glass that, like a contact lens, is porous to air. The air creates a cushion under the resin that is one-thousandth of an inch thick, so the liquid never sticks to the glass. A laser firing from beneath the glass solidifies the bottom layer of plastic in a precise pattern dictated by the object’s 3D file. A robotic arm slowly pulls the object out of the pool, and more resin flows under to be heated.

Carbon3D says it can produce objects of higher resolutions at speeds 25 to 100 times faster than traditional stereolithographic printers and several other techniques. Because the action of the machine is so smooth, it allows manufacturers access to a wider variety of performance materials such as stretchy elastomers and high-temperature-resistant resin. Carbon3D aims to develop its own resins for making objects ready for commercial sale. “We’re focussed on applications where the 3D-printed part is the functional part, where it could go into a car. Existing 3D printers don’t do that,” says Phelps. “And if it works as a final part would, why not just ship the 3D-printed part? If it’s just as good, why worry about injection moulding?”

A dozen companies, including Ford Motor and Hollywood special effects studio Legacy Effects, are testing Carbon3D machines, each of which will cost north of $10,000. Legacy, which worked on the Iron Man and Avengers movies, uses it to print prosthetics and props. The studio cut the time it took to print one crucial job from 16 hours to two hours.

“If I have speed, detail and material choice, that are high-grade engineering materials, that’s a winner,” says Jason Lopes, a lead systems engineer at Legacy Effects. “The throughput is absolutely amazing.” Ford liked it so much that its former CEO Alan Mulally joined Carbon3D’s board. Ellen Lee, Ford’s team leader of additive manufacturing research in Dearborn, Michigan, is now assessing the idea of using a Carbon3D machine in its rapid-prototyping unit. While Ford is still clearly years away from printing critical car parts, Lee has joked about printing gear shifters to fit the owner’s hand. “A lot more potential remains untapped in 3D printing,” Lee says. “It’s really going to change the way we manufacture in America. We want to understand how to best use it.”

Industry expert Terry Wohlers of Wohlers Associates says that while Carbon3D’s speed is a big deal for manufacturing, he’s uncertain of the quality of the end product. Over time, light can degrade the photopolymers used in stereolithography, making them less reliable than the thermoplastics used by more common fused deposition-modelling printers. Carbon3D says that its polymers use UV-blockers and pigments to protect them from light.

Carbon3D machines are priced well above the mass market, but that shouldn’t be an issue for large businesses if it works as advertised. “Ford spends hundreds of thousands of dollars on individual pieces of manufacturing equipment,” says Wohlers.

Carbon3D’s talk about disrupting injection moulding (a widely used manufacturing process) is a bit far-fetched, but its machines are bringing excitement back to 3D printing. “Ten years ago, a lot of firms started building 3D printing manufacturing plans,” DeSimone says, “and it was really exciting. Then they shelved plans, because the technology didn’t have enough horsepower to take them there. Now they’re starting to dust off those plans.”