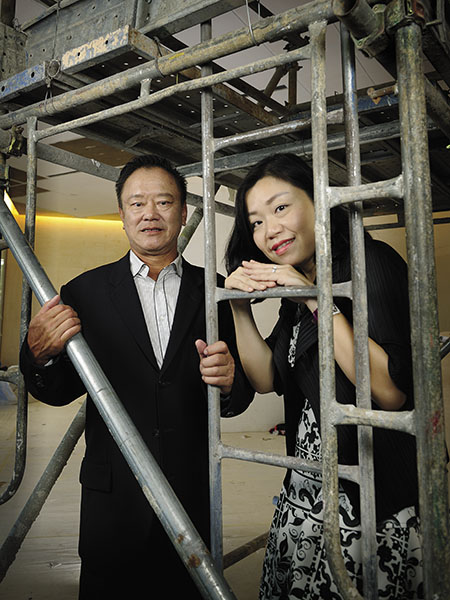 I’m 100 percent hands on, says Choo Chong Ngen, seen here with daughter and CFO Carolyn at the soon-to-be-opened Hotel Mi
Image: Munshi Ahmed for Forbes
Along a two-mile stretch in Singapore’s red-light district of Geylang, one budget hotel chain stands out. Hotel 81, with its signature blue exterior, has nearly a dozen inns dotting the side alleys of this seedy enclave known for, among other things, late-night supper options like frog’s porridge and turtle soup.

“We only sell rooms; we don’t sell anything else,” says the chain’s billionaire boss, Choo Chong Ngen, firmly, albeit in halting English, at his office in a suburban mall-and-office tower. “Red-light district—the whole world has a red-light district. You go any country, also have one.”

Choo, who ranks as Singapore’s No 14 with his privately held fortune of $2.05 billion, established his first Hotel 81 in Geylang more than two decades ago, ahead of smaller rivals, including the Fragrance Hotel chain owned by hotel and property tycoon Koh Wee Meng (No 30). Over the years, cheap rates have kept business brisk at these so-called love hotels; today rooms go for as little as $15 for a two-hour stay, extending to $47 a night.

But lately, Choo, 64, has been evolving from his Geylang roots. In late 2015, he opened Hotel Boss, a 19-storey, 1,500-room hotel nestled between Arab Street and Little India not far from downtown Singapore. On a recent weekday afternoon, its hotel lobby was bustling with visitors from Indonesia, Malaysia, China and India. Offering its own small, no-frills rooms at $94 a night, the “3.5-star” hotel, with an average occupancy of 80 percent, appears to be a hit with a different budget set.

Hotel Boss followed a few other midtier moves by Choo since 2009. And his makeover mission continues. This summer, he is opening the 343-room, 4-star Hotel Mi, his fifth hotel brand in just eight years, just outside the main shopping belt of Orchard Road, along Bencoolen Street. Choo’s portfolio will exceed 6,500 rooms across the island, with less than half belonging to Hotel 81.

Govinda Singh, a director and hotel specialist at real estate services firm Colliers International, confirms that Choo’s hotel empire is repositioning: “Because of its heritage, it probably didn’t have the best image,” he says, adding that it now wants to become a well-recognised budget brand such as Ibis, owned by French firm AccorHotels.

It’s a calculated decision for Choo. “People think Hotel 81 means Geylang,” he says. “Different names can catch different types of fish. No need to catch one type of fish. Can catch five types of fish, ten types of fish.” 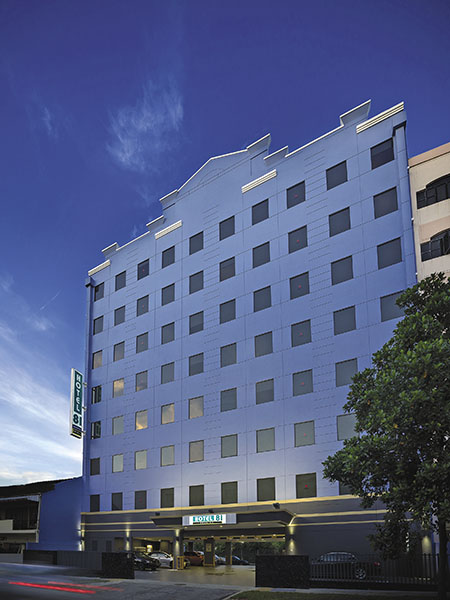 “We only sell rooms; we don’t sell anything else,” says Choo, Hotel 81’s billionaire boss

In recent years, smaller economy hotels have mushroomed across the island city, which saw visitor arrivals increase by 7.7 percent to 16.4 million last year. Even so, “Singapore is very small,” Choo laments. “If there are three more Hotel Bosses, we won’t be able to find any more customers—I must go outside.”

He recently made his first foray abroad, in Thailand, when he signed his initial affiliation with an international brand to open a 164-room Travelodge in Pattaya, where he bought and renamed an existing inn. Travelodge will also operate a hotel owned by Choo in Bangkok, slated to open by year-end. Choo declines to disclose financial details.

The Travelodge linkage is a good move, notes Colliers’s Singh. “When you go into a highly competitive environment such as Bangkok, you need all the advantages you can get, and what Travelodge brings as well is their international expertise in managing properties.”

Choo says he has the wherewithal to make acquisitions of up to $300 million and is scouting for expansion in Japan, Malaysia, Australia (where his rival Koh is already) and the UK. Or he could extend the Hotel Boss overseas with suitable sites. He won’t share operational numbers except to let on that at overall annual revenues of around $145 million, business has been profitable.

Consumers have ever increasing choices, and competitors are still migrating to Singapore, but Choo expresses confidence that, at his rates, guests will keep coming—especially as low-cost airlines bring multitudes from China and India. “The market likes this kind of price and this kind of hotel,” he says.

Choo honed his business acumen from a young age. He grew up with six siblings in a kampong (village) home in northeast Singapore. His father was a carpenter and his mother a homemaker. To help make ends meet, he sold ice cream in his neighbourhood when he was 10. By 14, he had dropped out of school and become a fishmonger. Every morning, he would head off to Kangkar fishery port, then situated near the mouth of Singapore’s Serangoon River, and sell baskets of catch at a nearby market.

It was when he started selling textiles at 17 that Choo got his first break. From a small market stall, his trade grew, and by the age of 32, he owned several stores. Eventually he exited to focus on property investments.

Despite his success, Choo leads a simple life, preferring to eat at hawker centres

After a stay in a Tokyo salaryman hotel in 1991, he had an inkling: “The room was very small, and it was a very fair price. I thought this one bring to Singapore, can make money,” he recalls. Three months after his return, he had enlisted an architect and selected Geylang, where he owned properties, as his launchpad.

In 1995, he opened his first Hotel 81, using the unit number of his home at the time. “Because I no study, I cannot put Shangri-La. I don’t know how to spell,” he laughs with self-deprecation. “Hotel 81? I know how to write.”

As it turned out, Choo’s business literacy was stellar. Within five years, he had ten hotels, mostly in Geylang and the adjacent Joo Chiat neighbourhood. “I’m 100 percent hands on, not 99 percent,” he quips. He does daily spot checks and fixates on details such as the design of the laundry baskets and the baggage trolleys used by the bellboys. In the past, he would even help out with housekeeping during staff shortages.

Challenges have tested his resolve. The 2003 Sars outbreak was a big blow, forcing him to slash rates. “Sars was the worst. My business dropped by 80 percent,” he recalls. The 2008 financial crisis dealt another whammy. No bank was willing to lend him money to pay for a site he had won in a government tender as the sole bidder.

“I used some of my cash, I used some of my properties and all the OD (overdraft) money, all take out,” recalls Choo. He paid $37 million for the site, located along what was a nondescript suburban street. “In my mind, I think, hey, [it’s near the] MRT [mass transit], I can make a row of shops and build a hotel.” Two years later, he opened his first V Hotel on the plot.

Today, his daughter, Carolyn, 40, the chief financial officer, says her father’s self-made saga has been a source of inspiration for her and her three brothers. “We know how difficult it was for him to build his business. He didn’t strike Toto [the lottery], you know.” Despite his success, she adds, her father lives a simple life, preferring to eat at hawker centres.

Choo is restructuring to put his various units under a holding company that will be run by Carolyn as group managing director, starting in January. “One important mission is to preserve the legacy,” she says. It will continue to be a family-run business—two of her brothers and a cousin are part of the team. Meanwhile, Choo will remain involved in strategy.