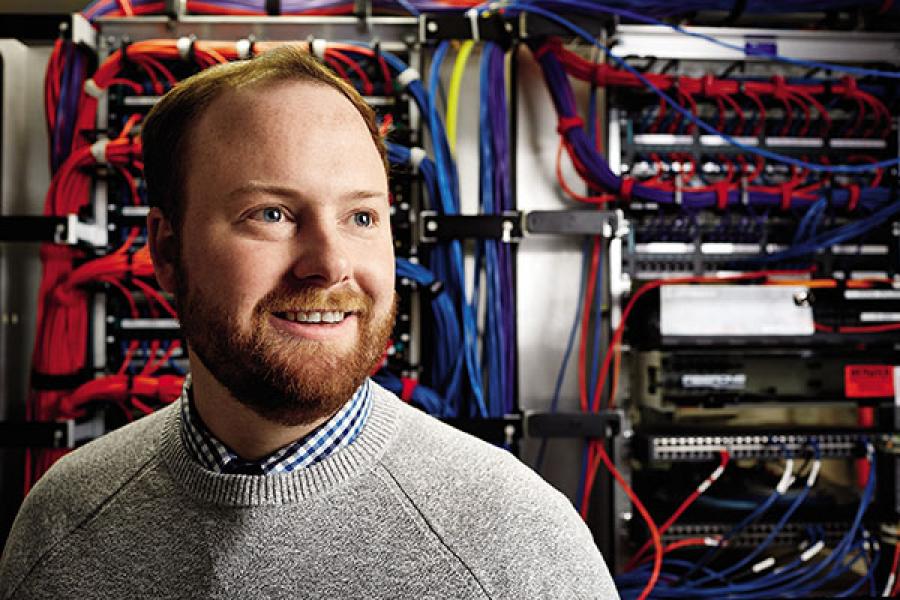 Image: Jonathan Kozowyk For Forbes
Datto founder Austin McChord. “We can disrupt the biggest of the big: Symantec, HP, EMC,” he says

Austin McChord offers up a smoking cup of liquid nitrogen. “Dip your ﬁnger in it. It boils off right away.” We dip, and it does. “We bought a tank to make ice cream, but we do all kinds of weird, random stuff—we’ve frozen a few computers, and they just shatter.” He dumps the liquid nitrogen on the ﬂoor and guides me through the rest of his geek heaven of an office: The Times Square-style LED wall for Super Nintendo tournaments, the collection of home-made drones and Japanese sleep pods (“Comfortable for one person, but too small for two”).

Despite the tech swag, the 29-year-old CEO of data backup company Datto is far from Silicon Valley’s glitz—3,000 miles. Headquartered in a drab office park in Norwalk, Connecticut, Datto deals in the coma-inducing business of information recovery. Just as Amazon Web Services provides any size business with cheap, all-you-can-eat computing power via the cloud, Datto’s subscription service will revive a company’s network instantly when things go on the fritz. While the Snapchats and WhatsApps get hype for attracting hundreds of millions of users, McChord is quietly doing the same trick with revenue. Next to the video games, screens ﬂash daily sales ﬁgures down to the penny.

In 2014, McChord did just under $100 million in revenue—up 32-fold since 2010. Today, Datto’s 400-plus employees support five million clients worldwide, including a handful in Greenland.

Bigger ﬁrms have taken notice. In early 2013, a security ﬁrm—McChord won’t say which—offered $100 million for the company. McChord, who owned 100 percent of Datto at the time, passed. He wasn’t done. Instead, he raised $25 million from General Catalyst Partners in the fall of 2013. The deal brought Paul Sagan (former CEO of Akamai) and Steve Herrod (former CTO of VMware) onto its board to help turn scrappy Datto into a billion-dollar business. “We can disrupt the biggest of the big—Symantec, HP, EMC,” says McChord. “We’re esoteric and crazy, but that’s the goal.”

McChord got where he is by giving small businesses (law ﬁrms, engineering shops, dentists’ offices) the type of bulletproof backup that was available only to big corporations. The hardware and software built by Datto can capture a snapshot of a company’s entire IT system as often as every ﬁve minutes. Since the system sits on the customer’s premises and in the cloud, the company can get back up and running from anywhere as long as it has an internet connection. Datto won’t comment on pricing, but a partner says it costs about $350 a month and $2,800 upfront for one terabyte of data. When the massive tornado tore through Joplin, Missouri, in 2011, Datto instantly retrieved local hospitals’ access to medical records. After Hurricane Sandy swamped the system of New York hedge fund Richmond Hill, Datto had it back in the market in minutes. “Austin told small companies, ‘Just pay me a subscription, and I’ll take care of all the complexity’,” says General Catalyst’s Sagan. “He reached a market no one had talked to before.”

McChord has always been a tinkerer. At middle school in Newtown, Connecticut, he constructed Rube Goldberg machines. McChord built his high school’s video-editing software and repaired TVs he dug up from the town dump. He studied electrical engineering at the Rochester Institute of Technology but found it too easy and switched to bioinformatics, a mash-up of computer science and biology.

In the summer of 2007, McChord started making his own data backup devices, hot-glueing Linksys boards and writing software in the basement of his dad’s engineering ﬁrm. A 2008 article in Gizmodo attracted the ﬁrst customers. Next, he built a system that lets you synch data between two computers (think Dropbox without the Cloud). He racked up $80,000 in credit card debt to buy two booths at the big CES trade show in Las Vegas. A distributor for Best Buy ordered 2,000 devices—on consignment. McChord was still building them by hand and was awash in debt. “I wasn’t sleeping. I was having chest pains,” he says. “I thought I had a heart problem, but it was all in my head.”

Unable to fulﬁl the order, McChord simply stopped chasing the consumer market and searched for a business product he could sell for recurring cash revenue. He found a Zenith InfoTech backup system that ran Windows and built a better version that ran on Linux. Marketing to millions of small businesses is messy, so McChord focussed on a few resellers to hawk the new product. By the end of 2009, he was doing $70,000 in monthly sales and hit a total of $3 million for 2010.

Then disaster struck. McChord released a new product called Aurora that could restore down systems in about an hour. It worked great on new computers but crashed old ones. Every sale created a customer service problem. He had to design a new product from scratch while selling the ﬂawed system to meet payroll. A few months later, he released Siris, which cut recovery time to six seconds. Customers who had bought the bad system got a free upgrade. Sales hit $9 million in 2011 and $25 million in 2012.

The $100 million buyout offer came to McChord in early 2013. He was torn. “It was pretty clear their plan was to dismantle the company. I didn’t want to see people laid off,” he says. “I passed. I have a rare opportunity, and it seemed funny not to follow it all the way.”

That means going after more forms of data. In December 2014, McChord purchased Backupify, a startup in Cambridge, Massachusetts, that backs up data in cloud apps such as Salesforce and Google Apps. “You don’t have to build a Snapchat to be a billionaire,” says McChord. “Instead you go after a product, do it 30 percent better, 10 percent cheaper and build an incredibly valuable business.”