Once a tiny kettle chip company, Inventure has branched out into healthier snacks with higher margins. Where does it go from here? 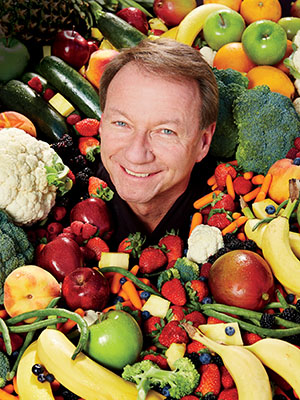 The world of snack foods is a Manichean struggle for the soul of your stomach. Do you reach for the tasty, high-calorie, additives-rich mozzarella sticks—or less processed, lower-calorie fruits and veggies? Inventure Foods of Phoenix isn’t picking sides. “We still believe in the ‘indulgent’ food business—it pays some bills, and we don’t want it to completely go away,” says CEO Terry McDaniel, 57. “But our focus— and most of our growth—has been the ‘healthier natural’ side.”

That side generates 80 percent of Inventure’s $253 million in sales. So-called healthier natural can mean just about anything: Rader Farms frozen berries sold in Costco and others; the Fresh Frozen Foods label, ubiquitous throughout grocery stores in the Southeast; smoothies mixes for Jamba Juice; and “totally natural” potato chips from Boulder Canyon.

While Inventure’s roots are in “indulgent” foods—Poore Brothers kettle chips as well as snacks for Nathan’s Famous, TGI Fridays and Vidalia Brands—that category is growing at 2.8 percent a year nationwide. Back in 2006, the company decided to branch out into healthier snacks, growing at 12 percent a year.

That decision was the second time that Inventure, confronting a critical juncture, made a tough, but correct decision. The first occurred 19 years ago when brothers Jay and Don Poore sold their eponymous potato chip company to a local investor.

Don, 75, retired in 1995. But Jay, 67, is still vice president of engineering at Inventure Foods. You can find him walking the floor of the Goodyear, Arizona, plant which can turn out 60,000 pounds of potato chips every day. One after another, 130-pound batches of fresh-peeled spuds smack into heavy-duty cylindrical slicers; hundreds of raw chips are flung into automated deep fryers the size of a Fiat 500 Sport.

Back in 1966, the brothers took jobs at Mira-Pak, a Houston company that built packaging machines for the snack food industry, eventually becoming engineers. After a short stint running their own parts and services firm for “bagger” machines, they partnered with Horace Groff, grandson of the founder of Groff’s Snack Food Company in Bowmansville, Pennsylvania, to produce a kettle-style potato chip. Groff’s of Texas launched in 1983. Relatively rare then, kettle chips were produced in smallish batches, turning out thicker and crispier, and carrying a more natural potato flavour than their mass-market cousins. “We figured it was niche—and a vacuum we could fill,” Jay recalls.

In 1986, the brothers sold to a partner, settled in Phoenix, found a decent plant at a good price and launched Poore Brothers Potato Chips. By the mid-1990s, the brand was generating almost $7 million in annual sales, led by the success of its jalapeño- and salt-and-vinegar-flavoured chips.

By then, the Poore Brothers had taken a good bite of the local kettle chip market, largely at the expense of Frito-Lay. “To do that is really hard,” says Mark Howells, then president of broker-dealer Arizona Securities Group. It took him a year to persuade the Poores to sell out to him and a group of investors. Jay wasn’t too sure: “We had everything we owned in this world invested into this company.”

The Poores finally sold for over $3 million, plus 150,000 shares each. Jay concedes they made the right choice, adding, “We were better technicians than businessmen.” Says Howells: “Everybody kind of got it—both they and us—that in order to go to the next step, there would need to be some cash infusions and some additional management in the company.”

All that happened rapidly. A year later, in 1996, Howells took the company public, raising $7.8 million under the catchy ticker symbol SNAK. He installed Eric Kufel, then a 30-year-old brand manager who’d done time at Coca-Cola, Dial and Kellogg, as CEO. He bought Keebler’s popular Tato Skins division, acquiring a new snack plant in Bluffton. In 2000, he cut a licensing deal with TGI Fridays. “Sales from Fridays more than doubled within 24 months,” recalls Kufel.

Terry McDaniel, the current chief executive, came over in 2006—the year the firm changed its name to Inventure (as in “innovate” and “venture”). As CEO and president of Wise Foods, McDaniel had helped ship chips to Inventure after its Goodyear plant caught fire. Kufel persuaded him to come aboard as COO. But a couple of small disasters greeted him: Crunch Tunes (snack chips shaped like Looney Tunes characters) and a licensed sweet snack for Cinnabon had bombed.

And there was a bigger challenge. The departing Kufel had decided that Inventure had to diversify its lines into less artery-clogging fare. McDaniel, who took over as CEO in 2008, had to execute the strategy. He turned first to Boulder Canyon, the Denver maker of potato chips, acquired in 2000. Inventure had touted its natural ingredients, but it languished. “It was a clean but very boring product,” says McDaniel.

Hawking the brand to natural food stores outside of Colorado, Inventure offered compostable bags and added lines like rice-and-bean chips, vegetable crisps, sweet potato chips, multi-grain snacks, protein crisps made of lentils and pea protein that come in cheese flavour or chocolate. As of the first half of 2014, Boulder Canyon was on track to generate $40 million for the year. Around the corner is a breakfast cereal featuring whole grain puffs injected with yogurt or chocolate.

The company pushed hard on frozen fruits and vegetables. Rader Farms of Lynden, grabbed for $22 million or so in 2007, added $27 million to the top-line the next year. McDaniel found an additional market for those frozen berries by coming up with a do-it-yourself smoothie kit the company licensed to Jamba Juice.

Last year, Inventure spent $38 million to buy Fresh Frozen Foods, the $60 million-plus (sales) processor of veggies. It’s the first push into a $4.4-billion-a-year market and the first run at the likes of Bird’s Eye, Green Giant and dozens of private labels by resorting to simplicity and transparency—literally selling its peas and carrots in clear plastic sacks. “That’s a risky proposition,” McDaniel concedes. “You better have quality because things will change colour in the bag.”

What’s next? Inventure filed a shelf registration that allows it to increase the number of shares outstanding, up to $100 million worth. That opens a raft of potential acquisitions in the healthy category. McDaniel can buy all the firms he wants and let them thrive under their own labels. But this category cries out for a single brand with a strong identity, like the one the Poore brothers once built. That’s a crossroad Inventure hasn’t yet reached.