Japanese banks have been a long-running joke on Wall Street. One Greek-American banker with a taste for the glory days of finance aims to change all that 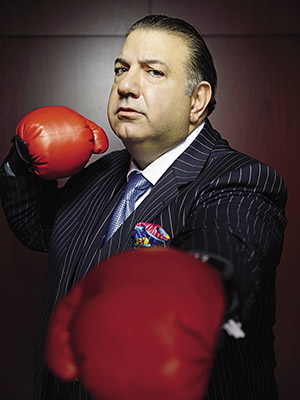 We want to be the new face of Wall Street,” booms John Koudounis, CEO of Mizuho Securities USA, an arm of Japan’s second-largest bank by assets, Mizuho Financial Group. From his midtown Manhattan office, Koudounis proceeds to rattle off a litany of capital markets wins: “We are top ten in investment-grade credit and asset-backed securities. We have had 147 lead manager mandates,” he says, referring to winning new business in the last year and his firm’s consequential doubling of revenues, with over $300 million in bond-underwriting fees. “We are the new face of the top ten investment banks. People are looking over their shoulders.”

Rest assured that Goldman, JPMorgan and other giants of finance are not about to throw in the towel, but Koudounis—a 49-year-old, 275-pound former college football linebacker—can be quite convincing. In 2008, Mizuho was the laughing stock of the bond world, best known for betting and losing $7 billion on subprime mortgage pools, including one named Aardvark.

Seven years later, Mizuho Securities USA is back, says Koudounis, with $50 billion in assets and 700 employees, and growing fast. Koudounis is one of the few CEOs on Wall Street’s sell side with anything close to a growth plan. His American peers are still slashing head count and shuttering businesses. In Europe, deleveraging remains the modus operandi, and a wave of CEO firings from London (Barclays) to Frankfurt (Deutsche Bank) is causing firms to retrench.

Over a meal of Dover sole and iced tea in the Grill Room of the Four Seasons Restaurant on a rainy Tuesday in November, Koudounis tries to hammer the point home. He arrives at exactly 12.30 pm—precisely the moment when the Four Seasons’s mythical “power lunch” is supposed to begin inside the Philip Johnson and Mies van der Rohe-designed French-walnut-panelled dining room. Koudounis, a gregarious Chicagoan of Greek descent, strides in wearing a loud navy suit with thick grey pinstripes, a red tie and a matching pocket square.

He takes his seat among a gaggle of ageing billionaire financiers: Leon Black, Michael Steinhardt, Sanford ‘Sandy’ Weill and Maurice ‘Hank’ Greenberg. The room feels like a living museum of the glory days of Wall Street, and Koudounis would like nothing more than to take his place among these Olympians. In fact, Koudounis is actually there for his scheduled twice-weekly feast as a way to see and be seen within the corridors of high finance. But despite his efforts, he remains mostly anonymous. Not a single fellow power-luncher approaches our table.

The Four Seasons Grill Room is a far cry from Koudounis’s humble beginnings in Chicago. His grandparents emigrated from Sparta, Greece, in 1900 and scratched together a living selling hot dogs outside of Wrigley Field. His father, George, expanded the family business by opening a drive-in called George’s Old Town Red Hots.

The sausages afforded Koudounis a suburban middle-class upbringing. As a star football player and class president of Niles West High School, Koudounis was accepted at Harvard, Yale and Princeton but eventually chose Brown. His sister and he were the first generation of Koudounises to go to college.

Like many in the Ivy League during the go-go days of the 1980s, Koudounis entered with ambitions of becoming a doctor, lawyer or policymaker, but graduated on a fast track for Wall Street. He took a job at Merrill Lynch in 1988 as a junk bond salesman. One of his first assignments was working on Donald Trump’s disastrous takeover of the Taj Mahal Casino.

After a handful of years at Merrill and other firms, Koudounis landed at Dutch bank ABN AMRO, where he built up the firm’s fixed-income business over a dozen years before its $100 billion sale to Royal Bank of Scotland in 2007. From there Koudounis fielded offers across Wall Street but decided to join Mizuho as its fixed-income head, tasked with rebuilding the business after its embarrassing Aardvark fiasco.

Koudounis’s strategy at Mizuho is simple—avoid turning Japanese. This includes paying Wall Street-style bonuses, unheard-of in Japan.  His sales people and bankers, for example, all take home a slice of the profits they generate. Also, large “prestige” acquisitions are out.

For years, Japanese megabanks have targeted the US in search of a safe, growing economy in which to invest their titanic balance sheets. But they’ve failed because of cultural differences or ill-conceived plans. The banks are notorious for overhiring in areas where they lack expertise, followed by inevitable mass firings.

Despite the $1.6 trillion balance sheet of his parent bank, Koudounis is well aware that Tokyo will be unforgiving if he makes a mistake.  Koudounis roams Mizuho’s trading floors every day and has been known to clash with traders, parking his hulking body at their desks and forcing them to close out positions.

“There have been times where I’ve had to beat up the mortgage desk so we don’t get in trouble, especially [in] derivatives,” he says.

In 2008, Koudounis’s fixed-income business filled a void on Wall Street as larger players struggled to weather the crisis. On some days, his bare-bones operation took down half of US Treasury auctions. The crisis experience yielded record profits for Koudounis’s team. By 2010, he was picked to run Mizuho Securities USA.

Mizuho Japan’s massive balance sheet is key to Koudounis’s growth plans. In April, his firm was chosen to provide a critical $15 billion bridge loan for Actavis’s $70.5 billion takeover of Allergan, a sum most other banks can’t quickly lend. Mizuho is playing a similar role in Teva’s $40.5 billion acquisition of Allergan’s generics division and Anheuser-Busch InBev’s $107 billion takeover of brewer SABMiller.

Koudounis sniffs at the idea he is piloting yet another fly-by-night Japanese push into the US. “We are real. People haven’t heard of us because we are not a retail bank and not in every corner. But if you want to do one of the biggest deals in the world, you almost have to deal with us,” he says.

Earlier this year, Koudounis embarked on the second stage of his growth plan. Mizuho bought a $36.5 billion book of loans from RBS for $3 billion, giving the firm expanded access to corporate clients and absorbing 130 investment bankers. Equities are next, he says.

Toward the end of our 90-minute power lunch, the room has mostly cleared but Koudounis is still pitching: “Now we can take that balance sheet and actually use it,” he says, leaning back to digest his meal. “That’s a seat at the table, and not just the Four Seasons.”

Tweets by @forbes_india
Railway Budget 2016: On track to appease all
Now, hire an Uber mobike for quick trips