His pioneering social media company did not become Facebook. But Chris DeWolfe is now seeking permanence in the ephemeral sphere of mobile games with Jam City 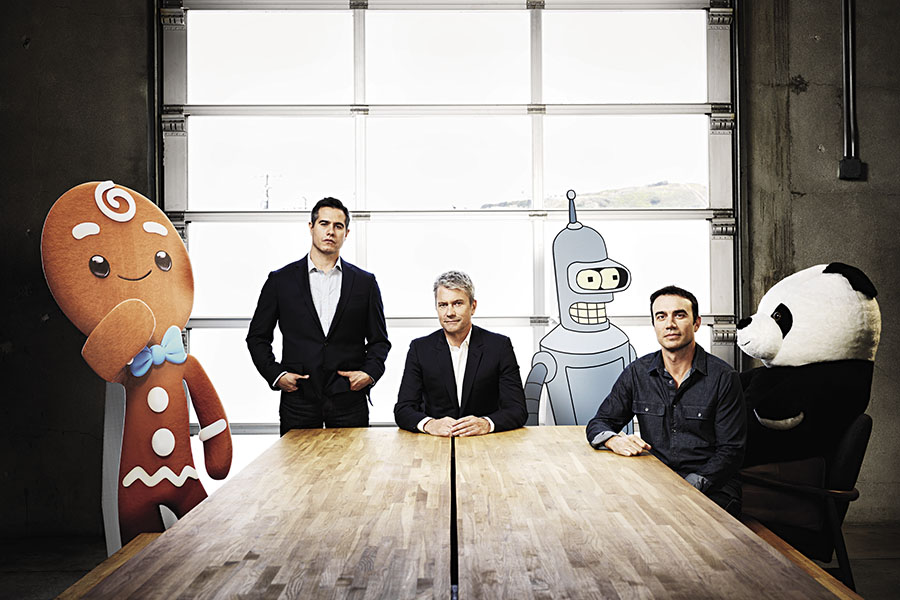 Château-Crème-a-Lot is a digital fortress of giant wafers, dipped cones and marshmallow swirls. It’s one of several dessert islands where the bright-eyed chef Panda solves puzzles with shaped chocolates to earn ingredients to make everything from cookies to cake pops on a quest to be the best confectioner. Chef Panda is the star of Cookie Jam Blast, a new game by Jam City, a seven-year-old mobile-gaming company in Culver City, California. It’s a spin-off of Jam City’s most successful franchise, Cookie Jam, which has been downloaded more than 100 million times and generated about half a billion dollars in revenue since its 2014 debut.

“We expect Cookie Jam to be around 50 years from now,” says Jam City co-founder and CEO Chris DeWolfe, 51. Such longing for permanence seems jarring in the hyperactive world of smartphone gaming, but it makes perfect sense when one recalls that in a prior life, DeWolfe was the CEO and co-founder of MySpace, the pioneering social media company that most definitely did not become Facebook. This time, he wants his creation to stick around.

It’s off to a good start. Since its launch in 2010, Jam City has become one of the fastest-growing private mobile-gaming companies, amassing 50 million monthly users and sending six titles to the charts that track the 100 highest-grossing games. It competes with giants such as Activision Blizzard, Tencent-owned Supercell and Electronic Arts. “There are only about ten companies who have had more than one game in the top 100,” says Wedbush Securities analyst Michael Pachter, who estimates the mobile-gaming market at $40 billion. “Getting more than one means you’ve figured out a formula that’s impressive.”

Jam City, which until last year was known as Social Gaming Network, builds half its puzzle and storytelling games from scratch and the other half using licensed major entertainment brands like Futurama and Peanuts. The original properties are more successful—they account for an estimated 75 percent of revenue—but the Hollywood stuff is safer, since it comes with “an instant user base”, says Josh Yguado, a former 20th Century Fox executive, who along with ex-MySpace CTO Aber Whitcomb helped DeWolfe start the company. But safety comes at a price—usually about 10 percent to 12 percent of a Hollywood title’s revenue is paid as a royalty to the studio.

The mix of swinging for the fences with original titles and bunting with Hollywood brands is paying off. Jam City saw sales of $322 million last year and hopes to exceed $400 million this year. Using a business model common in mobile gaming, Jam City receives the majority of its revenue from so-called “in-app purchases”, in which players pay for special features like new characters or extra lives. (All Jam City games are free to download.) The company has been diversifying its revenue streams by adding in-game advertisements, which could make up 10 percent of 2017 revenue. Jam City, which aims to go public within a year, says it has been profitable for three years but won’t disclose precise figures. Pachter estimates a profit of about $20 million this year.

Since its launch in 2010, Jam City has amassed 50 million monthly users

Smartphone gaming is a fickle, hit-driven business. King Digital Entertainment is the industry’s cautionary tale. After launching its top-grossing game, Candy Crush, in 2012, King sold itself to Activision for $5.9 billion—and hasn’t made a hit since.

How can Jam City avoid a MySpace-like tumble or King-like slump? It’s a real risk. But the company claims its expertise in data analysis will fuel steady growth for years. Jam City rigorously mines player data to figure out how to encourage more of those lucrative in-app purchases and how to retain users by personalising games.

Once, MySpace was a cultural juggernaut with 130 million users and the internet’s largest TV and music libraries, and the online home of icons like Taylor Swift and then-president Barack Obama, with about $750 million in annual revenue. Hasty monetisation, pressured by its $580 million sale to News Corp in 2005, killed growth.

Now DeWolfe is vigilant about protecting Jam City users, testing every feature before it enters a game and rolling out advertising only after data shows it boosts in-app purchases.

“MySpace didn’t become Facebook,” DeWolfe says, looking wistful but not defeated. “You have to ask yourself why.”

The paraphernalia in DeWolfe’s office mirrors his nostalgia. A New Yorker cover hanging above a sleek couch features a collage of all things hot in 2006: MySpace, Snoop Dogg, Scarlett Johansson. On his coffee table is a book of Banksy graffiti, including an image of an elderly woman with the words, “You looked better on MySpace.”

“As an entrepreneur, I had a lot of unfinished business,” DeWolfe says.

DeWolfe, a native of Portland, Oregon, got the inspiration for Jam City while travelling in Japan for MySpace in 2006. He noted how often people accessed social media and games from mobile devices at a time when they had yet to take off in the US When DeWolfe wanted to start another company after MySpace, he saw that the future of entertainment was mobile and decided to capitalise on the trend. After seeding the company with $1 million of his own cash and securing a $26.5 million investment from Austin Ventures, Jam City released its first original games in 2012.

“Half of the business is super-creative art and storytelling, and the other half is hard-core data,” DeWolfe says.

The 500-person company has a lot on its plate: Prepping for an IPO, trying to diversify away from its two big hits, and eyeing the Chinese market, perhaps with a partner like Tencent. Regardless of what the future holds, DeWolfe says that as an entrepreneur, he’s here to stay.

“It’s just what I like to do, manage big companies and grow them to scale,” he explains. “It’s not really about the money.”