Millions of preteens play video games on Roblox's website. That's not unusual for a social gaming unicorn. What is unusual: Teaching kids the rudiments of coding and paying them like entrepreneurs 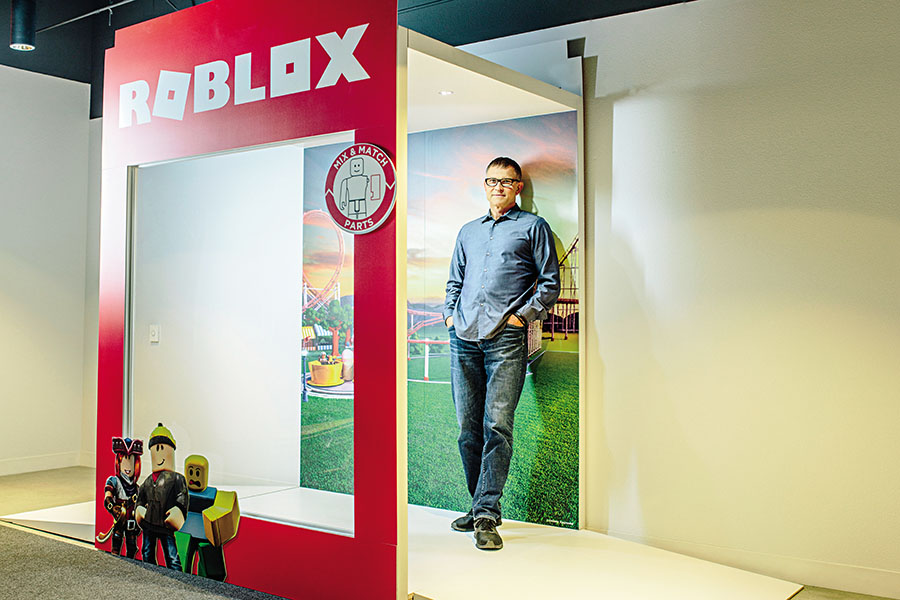 When Alex ­Binello was 13, he started playing games on a ­website called Roblox. He loved spending time with titles like Work at a Pizza Place and Down Hill Smash! so much that he was inspired to build his own. Now, 11 years later, he is the creator of ­MeepCity, a sprawling role-playing game that got 15 million visitors in July on the Roblox platform. Forbes estimates the cartoonish game has earned Binello millions since its inception in 2016. The 23-year-old, who has never taken a single computer programming class, now employs a salaried creative director and uses six other freelance workers to keep his game updated. “Roblox has just been part of my life,” he says. “I feel raised by it a little bit.”

Roblox, based in San Mateo, California, is a combination gaming and social media platform. There are millions of games that players—mostly young people—can explore with their friends, chatting and interacting all the way. But what’s unique about Roblox is that the gaming company isn’t in the business of making games—it just provides the tools and the platform for kids to make their own unique creations. Most impressively, Roblox has turned its tween audience into an army of fresh-faced entrepreneurs. Developers can charge Robux, a virtual currency, for various items and game experiences, and they can exchange the Robux they earn for real money: 100 Robux can be cashed out for 35 cents. (Players can buy 100 Robux for $1.)

“A lot of the developers on Roblox grew up on the platform,” says Dave Baszucki, Roblox’s 55-year-old co-founder and CEO. “And many of them are now starting to earn their living on the platform.”

Kids, as it turns out, are pretty good at making games that attract other kids. Globally, Roblox sees more than 70 million unique visitors a month. According to comScore, 6- to 12-year-olds spend more time on Roblox than any other site on the internet. Among teenagers, it ranks second, just behind Google’s sites, including YouTube. That translates into some pretty impressive numbers: Ro­blox is cash-flow-positive on an estimated $100 million in revenue last year (this year that figure should be north of $200 million) and has raised some $185 million in venture funding, valuing the company at around $2.5 billion. Baszucki’s stake is worth an estimated $300 million. (Roblox’s other founder, Erik Cassel, died of cancer in February 2013.) 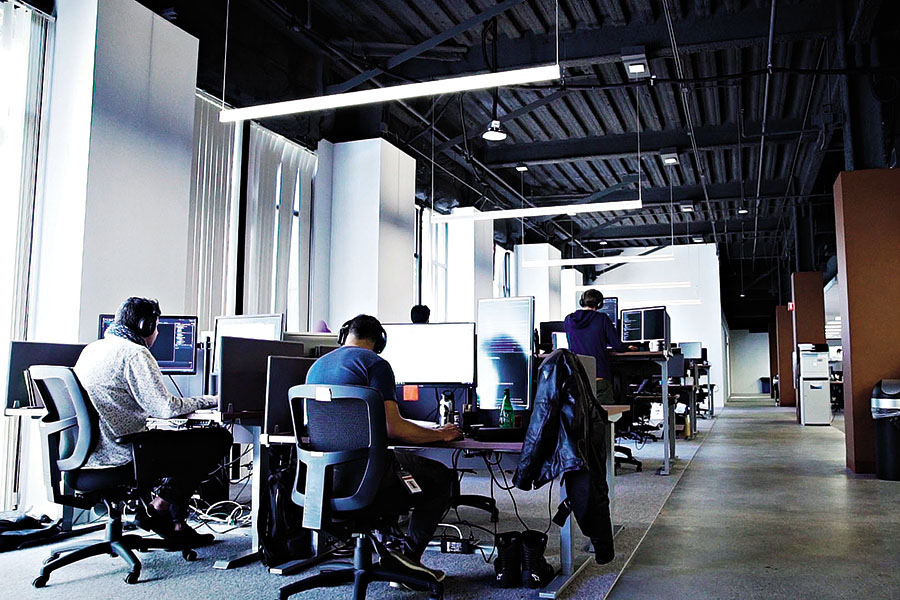 In 2017 up-andcoming game developers earned nearly $40 million on Roblox. This year that number should top $70 million

Part of the reason for this growth is the sheer number of games being produced. Nearly one million games are created every month by more than 4 million developers on the platform. These games cover a wide variety of genres, from traditional racing and role-playing games to the popular “cops and robbers” game Jailbreak to more mundane simulations like Snow Shoveling Simulator and Work at a Pizza Place. The platform has even spawned its own genres, such as “obbys”, complex, hard-to-navigate obstacle ­courses.

Roblox has its origin in a company Baszucki founded in 1989, an education tech startup called Knowledge Revolution. That company built a program that served as a 2D lab where students and teachers could model physics problems with virtual levers, ramps, pulleys and projectiles.

What Baszucki discovered as his software made it out into the student community was that kids were using the program to do things far beyond textbook physics problems. Instead, students were modeling cars crashing, buildings falling over and other fun stuff that the program’s physics tools enabled them to build.

“Creativity by the players themselves was so much more engaging than the content from the physics books,” he says.

In 1998, Knowledge Revolution was acquired for $20 million by an engineering software company called MSC Software, so Baszucki decided to take some time off and figure out what he wanted to do next. Inspired by the worlds kids had built in his interactive physics program, he and Erik Cassel, who had been vice president of engineering at Knowledge Revolution, “went into a room for over a year and a half” to build the first version of Roblox.

For the first few months after Roblox’s 2005 beta deployment, the user community was tiny—during peak periods about 50 people were playing at the same time (today that number averages over a million), but the small size of the community enabled Baszucki and Cassel to hang out with the players and get feedback as they refined the platform.

Once the pair published Roblox Studio—the app that enables Roblox users to create games and simulations—the floodgates began to open. By the year 2012, Roblox had more than 7 million unique visitors per month, making it one of the most popular entertainment sites for kids. The site continued to grow, but tragedy struck its founding team when Cassel was diagnosed with cancer.

“He loved what he was doing at Roblox,” Baszucki says. “And I saw Erik not change. He kept doing what he was doing. What for me was so amazing to see was that he was already in a good state of balance, and it kind of made me look at my own life. It was an inspiration for the people we hire—finding the type of cultural fit where people have a passion and share our dream and make this an amazing ­environment.”

As the company grew, it also experimented with different business models. Initially, revenue came from advertising and a premium membership model called Builders Club. But after a few years the company had moved to its current model: Selling Robux.

Roblox’s monetisation scheme allows young developers to obtain a cut of the money spent on their games. In 2017, developers earned nearly $40 million on the platform. That number is expected to surpass $70 million in 2018. Roblox has also started to make toys—think action figures and plastic cars—based on popular games. It shares the money it makes from those toys with its developers, earning them an additional $1 million in royalties in 2017.

“We just empower developers to figure it out,” said Craig Donato, Roblox’s chief business officer. “If a dev is too aggressive with monetisation, kids won’t play. If they have a great idea, it’ll get copied.”

The company also helps budding coders up their game. Its annual developer’s conference draws Roblox developers from all over the world to meet one another and exchange tips and tricks. More than 400 people came to this year’s RDC, which was held in San Francisco in July.

The company also has a paid internship programme that works as an incubator or accelerator for young devs to create games and improve them. This programme at the company’s Silicon Valley headquarters teaches them project-management skills and holds them accountable for the deadlines they set for their projects.

Since Roblox doesn’t need to worry about making games—or even how to make money from them—it can focus almost exclusively on infrastructure. The company is in the process of moving its platform from third-party cloud ser­vices to its own cloud. It’s hired Dan Williams, who helped Dropbox move off Amazon Web Service.

The next phase? Going international. Although Roblox’s users come from more than three dozen countries, the platform was English-only and dollars-only until just a few months ago, when Roblox launched a Spanish version. Since then, the company has averaged 5 million visitors a month from Spanish-speaking countries.

The company has also produced Brazilian Portuguese, French and German versions. It just hosted its second European developer’s conference and is building up teams to expand into more regions over the next few years.

“It’s super-exciting to think that a kid in Jakarta can make a game that a kid in Menlo Park would never even imagine but is really fun and relevant to other kids in Southeast Asia—and maybe the kid in Menlo Park, too,” says Chris Misner, the president of Roblox International.
“Our hope is that we will actually bring people together around the world,” Baszucki adds.

Despite the enormous growth of the platform, Baszucki still keeps in touch with his power users—even if many don’t know his name. On a Friday-morning company tour for players, a guide asked the kids if they’ve ever heard of Dave Baszucki—they all shook their heads. Then she asked if they knew Builderman (Baszucki’s name within Roblox).

A loud “Yes!” erupted from the group.