WeWork looks like it might die of coronavirus, but its oldest and largest competitor, Switzerland-based IWG, is well-positioned to survive the outbreak—and thrive in its aftermath. That should be no surprise. After all, IWG's founder, Mark Dixon, has seen this movie before 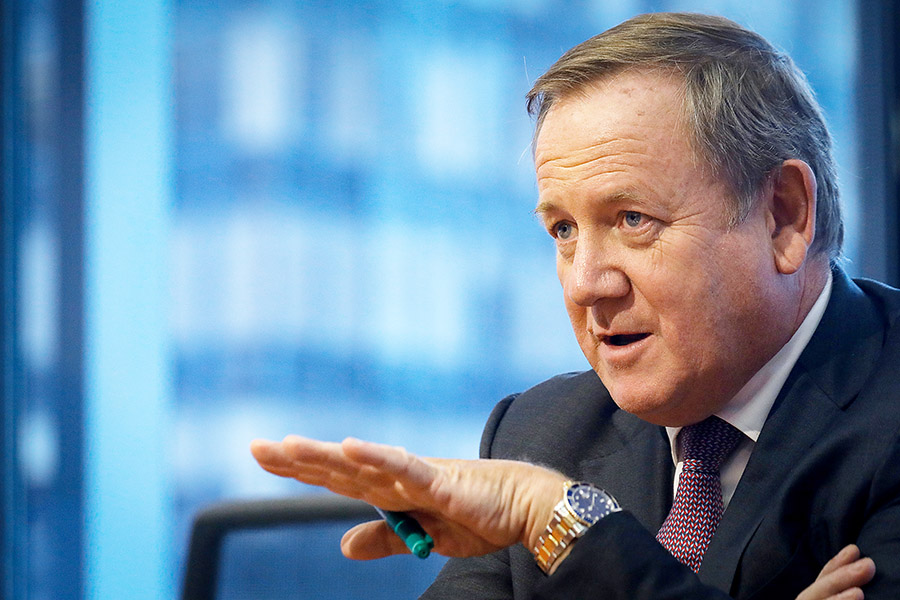 IWG founder and CEO Mark Dixon is worth closer to $800 million, after losing more than $1 billion in a single month
Image: Brendan Mcdermid / Reuters

Striding through trendy office space in London’s financial district in early March, Mark Dixon pauses to adjust a wooden wall panel that has come askew, then veers into a nearby meeting room with stunning views of the city’s skyline. “That’s the new Brookfield building,” he says, peering out the window at a cluster of skyscrapers. “We’re in that one.”

His eyes scan left—“we’re in the Gherkin,” he says, pointing to the famed football-shaped tower—then right: “We’re in the NatWest Tower, which is just over there.”

For someone you’ve never heard of, Dixon is just about everywhere. His Switzerland-based International Workplace Group (IWG), formerly known as Regus, rents, develops and sublets flexible office space—conference rooms, offices and coworking areas—in more than 3,300 locations across 1,200 cities in 110 countries. That global reach makes him the biggest flexible-workspace operator in the world, far larger than his much better publicised—and much more troubled—competitor WeWork, which has 739 spaces in 140 cities.

It has also put Dixon—IWG’s founder, CEO and largest shareholder—smack in the centre of the worldwide workplace-closing pandemic. When the stock market peaked this February, Dixon was richer than ever, worth nearly $2 billion. Then coronavirus came, sending workers home in droves and pushing IWG shares down by 75 percent, right alongside cruise operators and airlines. By the time Forbes locked in the World’s Billionaires list in mid-March, Dixon, who owns about 30 percent of IWG, no longer made the cut. He is worth closer to $800 million, after losing more than $1 billion in a single month.

“This is a 100-year storm,” says Dixon two weeks after his strut through London, now quarantining at his apartment in Monaco.

Work-from-home corporate policies and government-imposed lockdowns are hammering demand for shared office space. As the virus spreads country by country, IWG has been forced to temporarily shutter locations for cleaning, including 90 in China. (The company says all of its locations have been reopened.) In mid-March, reports surfaced that landlord Dixon sent a letter to his own landlords in the UK, seeking a three-month rent freeze in exchange for a three-month lease extension. A few days later, he announced he’s cancelling his next dividend payment and halting share buybacks as part of an effort to “reduce operational costs, limit both growth and maintenance capital expenditure and optimise cash flows”.

All these moves are part of his plan to ensure that his financially conservative firm can not only withstand the pandemic but come out of it stronger. It very well may work, for two simple reasons: He’s been here before, having survived the original dotcom crash that almost killed his business, and he runs a tight ship. While WeWork followed the Silicon Valley playbook of growth at all costs—losing some $2.2 billion on revenues of $2.5 billion in just the first nine months of 2019—Dixon, 60, has built IWG in a much less flashy way: Steady growth, a laser focus on return on investment—and actual profits, even as it has bought up more than 30 competitors over the past decade. Last year IWG netted about $180 million from continuing operations on $3.5 billion in revenues. It pumped $515 million of capital into new locations, repurchased $65 million worth of stock and paid shareholders $20 million in dividends. The business has about $90 million in cash on its books and little net debt—about what it throws off in cash flow every year. That puts Dixon on strong footing at a time he desperately needs it. 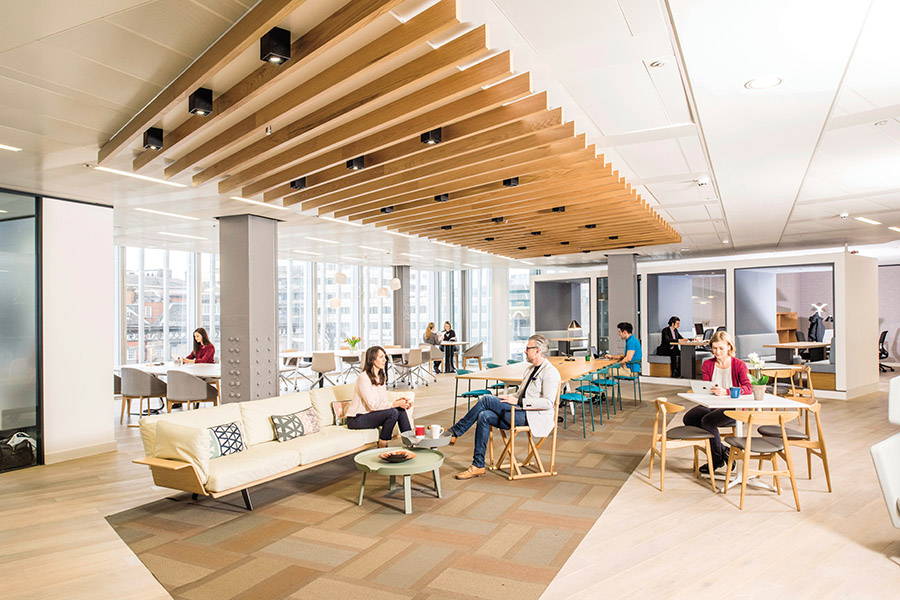 IWG operates 3,300-plus spaces in 1,200 cities around the world, including a Regus-branded office inside London’s ‘Baby Shard’ tower, a short walk from London Bridge
Image: IWG

He learnt that lesson the hard way. The son of a Ford engineer in Essex, England, Dixon dropped out of school at the age of 16 to launch a sandwich delivery business, then did an assortment of work that included selling encyclopaedias and lumberjacking before creating his first shared office space in Brussels in 1989, just shy of his 30th birthday. “You could see people working inefficiently in all sorts of places and I knew that real estate was just the most complicated thing to deal with if you’re a company,” Dixon says. “I said, ‘there’s got to be a better way’.”

His bet, that companies would pay a premium to have access to workspaces around the world if someone else handled the hassle, paid off. But the business is especially susceptible to big global shocks—“9/11, Sars, swine flu, volcanoes, earthquakes, cyclones, shootings. You name it, we’ve had it somewhere,” he says.

The greatest shock was the dotcom crash. Dixon had just taken IWG public on the London Stock Exchange and was starting a huge push into the US when the tech bubble began to burst in 2000, dragging demand for office space down with it. IWG was losing $4 million a month as customers were jumping ship. Shares cratered, and the company’s market cap fell from roughly $3.1 billion to $55 million. “We were staring into the abyss,” he recalls. 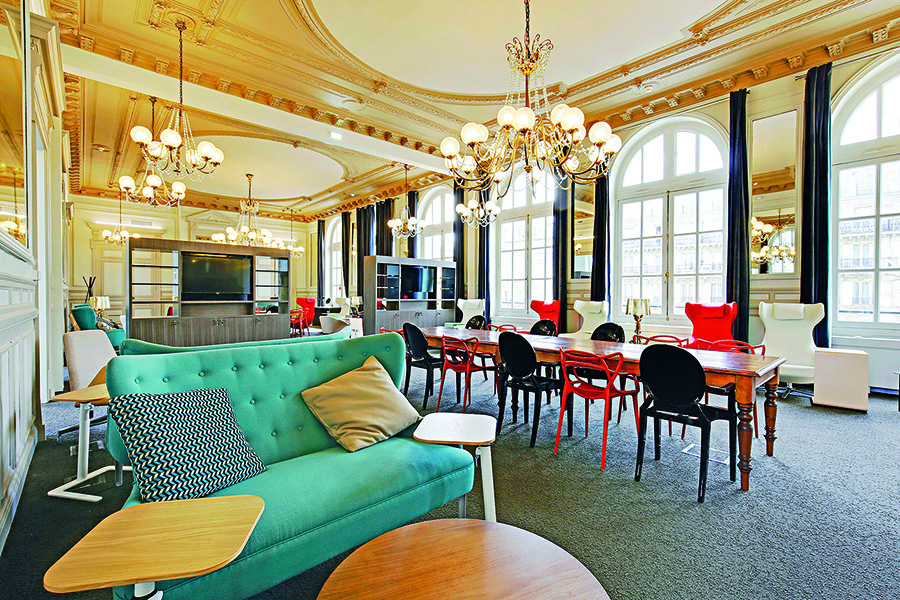 IWG operates 3,300-plus spaces in 1,200 cities around the world, one inside Paris’s Gare du Nord train station
Image: IWG

Dixon put his US operations into Chapter 11 to renegotiate lease terms with his landlords and sold a controlling stake in his profitable UK business to a private equity firm to help finance a restructuring. In 2004, his books in order, Dixon acquired his biggest competitor, HQ Global, after its own nasty bankruptcy, and he soon bought back his UK business too. “We basically cata­pulted out,” Dixon says. “But from that moment on, we’ve had a super-cautious view on growth.”

As he’s expanded, he’s been careful to make his landlords more like business partners rather than simple suppliers. In some cases, IWG gives them a cut of a property’s revenues or profits in exchange for more favourable terms. More than a quarter of IWG’s leases are variable like this, which mitigate risk by giving landlords some of the upside but putting them on the hook for some of the downside too.

Most of these plans are on hold as coronavirus ravages the global economy and IWG’s share price. Luckily for Dixon, IWG’s customers tend to be large multinationals like HSBC and mid-size companies like Telos looking for access to workspaces around the world, rather than freelance workers and tiny startups. They are, on average, already signed on for nine months to a full year. Just 10 percent have inked deals that are month-to-month or shorter, Dixon says, compared to 28 percent at WeWork. And while WeWork’s IPO filings show that, even before coronavirus, just 30 percent of its open workspaces were producing stable cash flow—the inevitable result of the company’s hyper-growth strategy—more than 70 percent of IWG’s spaces are already stable moneymakers.

With investment in new locations, renovations, dividends and buybacks on the back burner, the money coming in will help keep the company afloat until the storm abates. And IWG’s size and proven track record will make it easier for Dixon to renegotiate some of its leases, further cutting costs. “It’s a very well-managed business,” says Calum Battersby, a UK analyst who covers the stock for Hamburg-based Berenberg Bank. “They’ll mitigate as much as possible.”

That’s crucial, since the coronavirus could end up proving to be a boon for the flexible-space providers who are able to survive long enough to cash in. The industry was projected to quadruple in value by 2027, according to a Zion Market Research report. That may seem optimistic, but the pandemic could end up driving more people into these types of spaces.

“Any company that’s not using flexible space currently, after going through something like this, is going to be very reluctant to sign any type of long-term lease,” says Laura Kozelouzek, who runs Quest Workspaces, a chain of co-working centres in Florida and New York. “They’re going to realise how important it is to be dynamic, because you never know what’s around the corner.”

“[The shift] was already happening. This will just help it along more,” Dixon says, before—true to character—offering a word of caution: “But we have to get through to the other side of the crisis first.”