The Lee family has been selling its Lee Kum Kee sauces for 130 years. Sammy Lee is now thinking about the next millennium 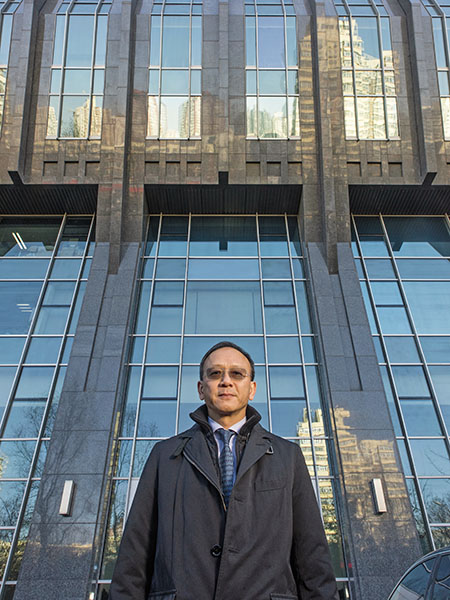 “Our experience should inspire many other family businesses,” says Sammy Lee
Image: Gilles Sabrie for Forbes

While growing up, Sammy Lee heard all the stories—the family feuds, vicious lawsuits and broken hearts that had wracked the family’s LKK Group, famous for its Lee Kum Kee sauces. Back in 1986, his father, Lee Man Tat, now 87, was taken to court by his younger brother over control of the company. A similar episode erupted in 1972 involving Man Tat’s father and his two brothers. Familial ties were severed for good. In the late 1990s, Sammy himself battled to a two-year stalemate over his father’s plan to sell a money-losing unit.

Man Tat resolved the lawsuit by going heavily into debt and buying out his brother. More than 30 years later, he still controls 100 percent of the Hong Kong company, and that puts him on this year’s list of the city’s richest at No 11, with a net worth of $8.5 billion. Today, the LKK Group is the world’s largest manufacturer of oyster sauce and expects to be the largest soy sauce maker by 2020. It collects more than $3 billion in annual revenue and perhaps $150 million in profits, according to estimates by Forbes Asia.

But Sammy says its unit making Chinese health care products—which he co-founded—generates greater revenue and profits. It’s throwing off so much cash that it’s investing billions in real estate in Hong Kong, China and London. Sammy won’t disclose numbers, but overall the group likely posts between $6 billion and $7 billion in revenue and more than $600 million in profits each year.

Lee Kum Kee started in China in 1888, when it invented oyster sauce. It had to pick up and move twice—to Macau in 1902 and to Hong Kong in 1932—and it had to survive regular fights over succession and control. Few companies see their 130th birthday, but the Lees want LKK to prosper not only for another 130 years but for 1,000. It was Sammy—the youngest of Man Tat’s five children—who came up with the plan to make that happen. 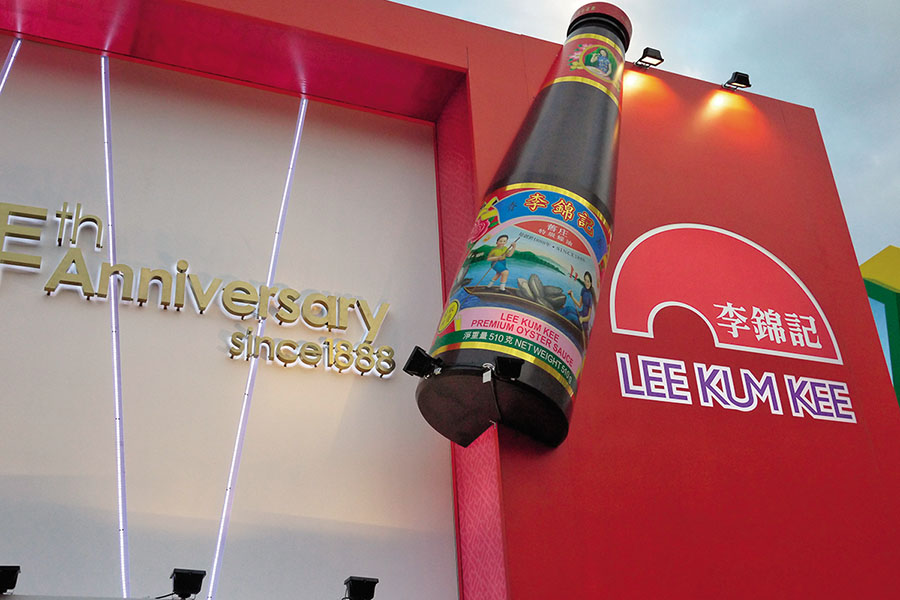 Message in a bottle: From oyster sauce in 1888 to 200 recipes today
Image: Alamy

In 2002, after soul-searching and brainstorming, Sammy and his siblings presented their father with a proposal for a family council. He didn’t object, and the council was swiftly formed. Overnight, Man Tat’s all-powerful sway over the group shrunk. Now there was a council of seven members—Man Tat, his wife and their five children—to handle family affairs such as investments and succession, as well as a parallel five-seat board (Man Tat and his four sons) to oversee the business. The goal: “At the family platform, it would be like there’s no business; at the business platform, it would be like there’s no family,” says Sammy, 53.

Soon afterward, the Lee brothers agreed to share an equal portion of the family fortune with their only sister, Elizabeth; following the custom of many Asian family-owned companies that pass down shares only to male heirs, she would have been denied a stake. Today the shares are vested in a trust controlled by their father. “Sammy is exceptional,” says the senior Lee. “He has come up with ideas that I could not think of. He has accomplished so much.”

Sammy’s goal was to end the infighting and the financial instability it caused. “If the [council] was in place, this would not have happened,” he says, referring to the past feuds. “The ownership was divided equally, but the family members did not have trust. They did not have common goals. Many families have broken up because they could not find a consensus. We had two buyouts in the past. If we didn’t do anything, history would repeat. It’s a lesson that I haven’t seen many families learn.”

The family council came on the heels of Sammy’s own fight with his father in 1999. Man Tat wanted to sell the Chinese herbal products company that he and Sammy had started on Sammy’s suggestion in 1992. It was haemorrhaging money, and Sammy was told a sale was inevitable. “My relationship with my father was bad,” says Sammy. “I proposed selling the shares in the sauces business that I [would be entitled to] in exchange for keeping the health-products unit, but which would also mean I would get out of the family business. Which also meant my father would never speak to me.” The stalemate persisted for two years, and he vanished from family events and the company. Then, in 2000, he resurfaced. “I thought it through. I was wrong all this time. ‘We’ is bigger than ‘I’.” He jots down that final sentence on a notepad; it’s now a family maxim. He proposed a five-year delay in selling the business to give him time to turn it around.

Understandably, there are no reminders of those bitter moments in the photo albums arrayed on the bookshelves in Man Tat’s office. Among the pictures: Several with the future president of China, Xi Jinping, taken in the 1990s while Xi was governing Fujian Province. Guarding the entrance stands a human-size glass bottle of the signature oyster sauce; the design of the paper label is from pre-World War II and features a fair Chinese woman in a blue cheongsam. 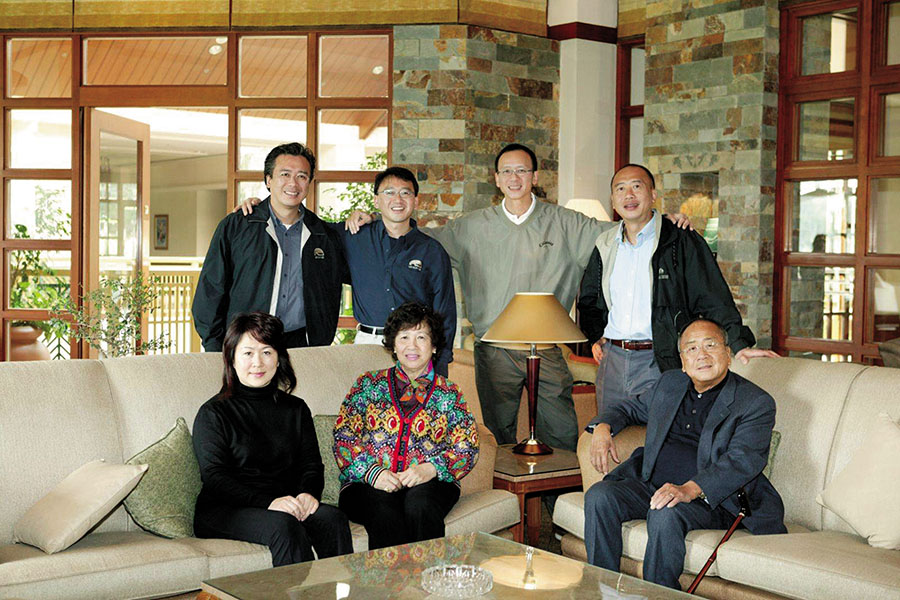 Family gathering, 2004: (Standing, from left) Charlie Lee, David Lee, Sammy Lee, Eddy Lee; (seated) Elizabeth Mok, Lee Choi May Ling, and husband and patriarch Lee Man Tat
Today Lee Kum Kee’s largest factory is back in the family’s ancestral home—Xinhui in Guangdong Province. That’s where the secret recipes for the company’s more-than-200 different sauces are kept. Visible from a distance are row after row of giant green silos, 3,000 in all, fermenting preservatives-free soy sauces for consumers worldwide. And there are four other factories—one each in Guangdong, Hong Kong, Malaysia and Los Angeles.

But it’s a room next to Man Tat’s office that might hold the key to the group’s longevity. That’s the nerve centre of the family council.

The staff there doesn’t get to see Man Tat often—he’s mostly retreated to an advisory role. Instead it’s his five children and 14 grandchildren who are regulars. Together they run a council that oversees everything. It’s a venue for dispute resolution and succession planning. Capping it all is a constitution canonising all the house rules.

The oldest sibling, Eddy, is now in charge of family affairs and investment. The second-oldest son is David, who heads the foundation and formerly chaired the sauces group. The next sibling is Charlie, the sauces group’s current chairman.

An electronic bulletin board in the council’s office keeps the time and the number of its meetings: 59 in the past 15 years. The latest quarterly meeting was in October in Xinhui. Typical activities include many rounds of golf, workshop sessions and games for team-building. In 2012, Sammy and his siblings and eight of their children travelled to Harvard for a session on how family businesses can handle a transition to the next generation.

The council has resolved many thorny issues over the years, such as prohibiting spouses from working for the group, requiring a two-thirds majority to change the constitution, and setting mandatory retirement ages of 65 for the business unit and 70 at the family council. And it’s introduced new rules, such as allowing non-family members to be the chairman or chief executive of any of its business units.

The council debates issues such as how to segregate the family from the business. But most important, how to keep the family business alive for 1,000 years (only four have survived that long globally: Two in Japan, and one each in France and Italy.) “We are studying an idea of banning family members from involvement in the business, so it could last 1,000 years,” says Sammy. Indeed, accommodating members of each generation who want to join the business might leave less room for talent from outside. “By that time each member’s equity would be very small.”

On a crisp sunlit December day in Beijing, Sammy has just finished a workshop at a conference on Chinese family businesses, whose ranks have swelled to more than 50 million. He’s an enthusiastic mentor: “We spent ten years trying out different models,” he says. “Our family’s experience should inspire many other family businesses in preparing their own preventive measures.”