All guns blazing on the currency front

For many nations, currency devaluation appears to be a weapon of choice for economic survival, but no one is likely to gain a sustained advantage 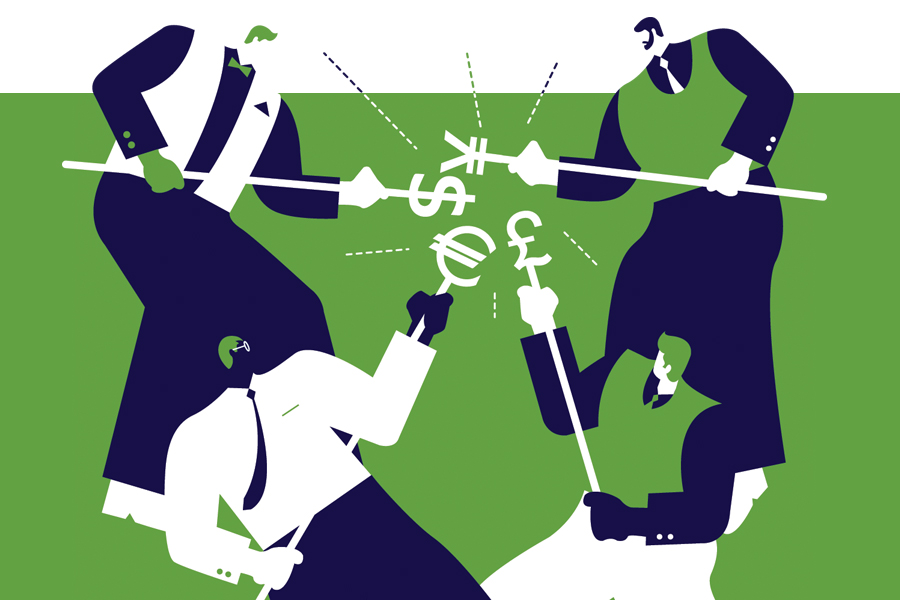 In January this year, US Treasury Secretary Steven Mnuchin spoke at the World Economic Forum in Davos indicating support for devaluing the US dollar. He argued that a weaker greenback was part of the ‘America First’ agenda and designed to boost exports. The very next day, though, President Donald Trump contradicted Mnuchin, saying the treasury secretary had been misquoted by the ‘fake news media’. Trump argued that America was becoming so strong, economically and otherwise, that the dollar was going to strengthen.

All said and done, the flared-up exchanges confirmed what everybody knew: The foreign exchange market is the latest battlefield in an escalating international trade war.

Battlefield Bulletins
The currency war, which has its roots in the financial crisis of 2008, is now entering a dangerous phase. For many nations, currency devaluation is a major weapon of choice for economic survival. Others prefer low or negative interest rates and quantitative easing (QE).

A devaluation of the dollar will trigger counterblows from Japan and Europe aimed at preventing their own currencies from strengthening. Other countries, especially in Asia where currencies are directly or indirectly pegged to the dollar, may also be forced to offset the consequent loss of competitiveness. China, for instance, needs a weak yuan to help manage its slowing economy, its property bubble, industrial overcapacity, fragile banking system and export- and debt-dependent economic model.

The currency war also threatens to spill over into the interest rate market. Central banks will have to implement measures to stop large capital inflows from pushing up the value of their national currencies. This will prevent them from normalising currently low interest rates and unwinding liquidity infusion programmes. The ensuing extended period of low rates will, in turn, add to risks in an already over-valued asset market. This will be reinforced by deflationary pressures as countries, such as China, with excess production capacity undercut competitors.

Political responses, such as declaring certain nations as currency manipulators or reporting countries to the World Trade Organization for violating dumping rules, will add a geo-political dimension to the trade stand-off.

Bad Tactics
Such eye-for-an-eye measures prove devaluation works better in theory than practice. The textbook objective of weakening currencies is to increase competitiveness and exports to give a fillip to economic growth. But in reality, when a country has substantial external borrowings in its own currency, devaluation engineers a transfer of wealth from foreign savers. Devaluation may also boost inflation as it elevates the cost of imports.

To date, foreign exchange battles have been, at best, inconclusive. It can be argued, for instance, that the US recovery from the financial crisis was propped by a weak dollar that helped to increase exports. But the role of investments in shale oil, government stimulus in emerging markets, budget deficits and prompt action in plugging banking problems cannot be overlooked either.

A sharp drop in the pound in 2007 was expected to increase exports, like it did in the 90s. But, though it improved the balance of trade, it was not enough to offset declining domestic demand and higher cost of imports. The muted effect of the devaluation was, in part, due to tepid demand from the US and the rest of Europe.

Devaluation has had limited success for several reasons. First, its effectiveness depends on exposure to trade. America is relatively self-contained, with import-export accounting for 20 percent of the GDP. Europe is more exposed but much of its trade is within the free trade area. China’s external exposure is complex as it is a global manufacturing hub, converting imported raw materials into final products. A lower yuan, therefore, has limited impact on economic activity.

Second, a weaker currency does not guarantee higher exports as sluggish global growth can result in stagnant external demand. A weaker currency also increases the price of imports. If the country lacks the infrastructure to substitute imports with local production, it may not boost domestic activity at all.

Third, existing industry structures determine the impact of devaluation. Many services are local, with no overseas exposure, limiting the impact of cross-border currency fluctuations.

Fourth, an increase in protectionism, (both covert such as trade restrictions, procurement policies favouring national suppliers, subsidies etc. and overt such as tariffs), may defeat the purpose of devaluations.

Fifth, there may be other influences. In many nations, large falls in commodity prices have a bigger impact on purchasing power than currency fluctuations. Overcapacity and fear of losing market share also influence trade behaviour. In many cases, producers sell at a loss only to generate cash flows that will service their borrowings.

Stalemate
In foreign exchange trench warfare, no one is likely to gain a sustained advantage. A weaker dollar means that the rest of the world loses. Or if Japan and the Eurozone benefit from a stronger dollar, the US loses. At the same time, if the euro and yen weaken, then as the dollar rises, China loses because the yuan appreciates.

Moreover, if a country lowers rates to weaken its currency, there is a risk of capital flight, which may weaken the domestic economy. If a country takes no action and their currency appreciates due to aggressive measures from competing nations, then exports suffer as competitors gain market share.

Even victors can only gain limited advantages. Recent estimates from the World Bank suggest that weaker currencies were only half as effective in increasing exports between 2004 and 2012 vis-a-vis eight years prior to that.

The side effects are also damaging. Currency volatility and uncertainty destabilises long-term business investment. A major fall in the currency reduces purchasing power. When the euro lost over 30 percent of its value against the US dollar, it effectively decreased Eurozone consumers’ income and wealth. Between 2012 and 2016, Australians, who import quite a bit, lost a similar amount of purchasing power. Many consumers in emerging markets have suffered severe drops in disposable income. Combined with stagnant incomes, this has reduced global demand, contributing to stagnation.

The policy also forces the cost of economic adjustment onto often smaller nations, via appreciation of their currency, destabilising capital inflows and inflationary pressures. This has contributed to problems in emerging markets, reducing their ability to act as an engine for global economic growth.

Using currencies as an economic tool suffers from the fundamental problem that it only works if one country resorts to devaluation. Every country cannot simultaneously have the cheapest currency. It only leads to a relentless spiral to ever lower interest rates, monetary expansion and deflationary pressures.

Policymakers also risk losing their tenuous command of the situation. Maintaining today’s fragile stability requires continuing the perception of order and mastery of events. Continued interest in gold, which now functions as a de facto currency, and even new cryptocurrencies suggests that at least some believe a currency crisis is inevitable.

Satyajit Das is a former banker. His latest book is Age of Stagnation. He is also the author of Traders Guns and Money and Extreme Money