European debt dominoes: Italy and France may be the next to topple

The two countries cannot avoid a financial crisis in an environment of low growth and low inflation, and both economies are also too large to fail 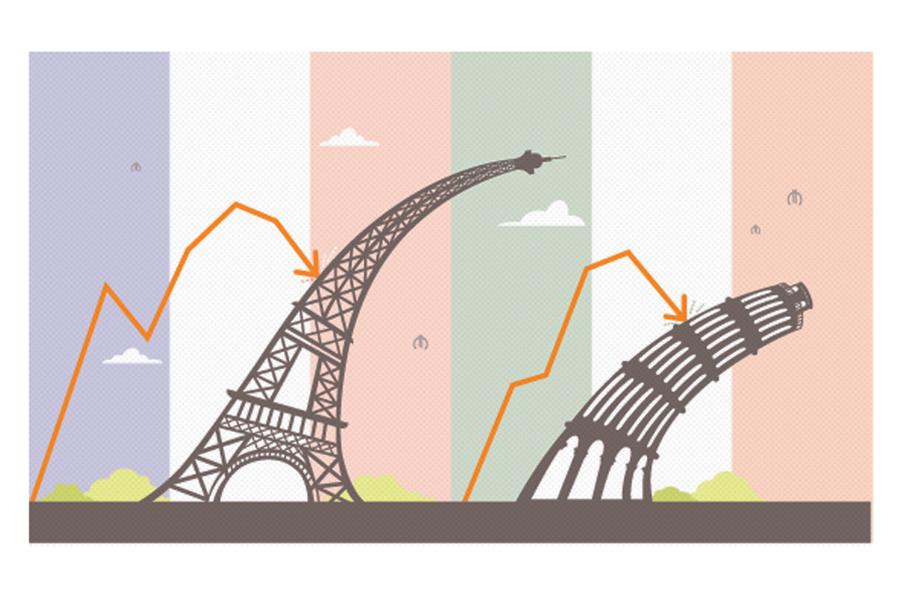 The unthinkable…
Certain diseases attack the peripheries before vectoring in on vital organs. Following a similar trajectory, the European debt crisis is moving ever closer to the core. Italy and France may be the next dominoes to topple.

Sharply lower energy prices combined with low government borrowing costs and a fall in the euro, driven by the actions of the European Central Bank, cannot hide deep-seated and unresolved problems forever.

Buongiorno…
Italy’s economy has shrunk by around 10 percent since 2007, as the country endured a triple-dip recession. Output has regressed to levels of over a decade ago. Overall unemployment is around 12 percent, with youth unemployment around 40 percent. Consumption and investments are flaccid.

The damage is long term, with as much as 15 percent of Italian industrial capacity destroyed, reducing employment and growth potential. Once its strength, Italy’s smaller enterprises have contracted as a result of low sales, declining profitability and lack of financing.

Italy has a current account surplus of 2.2 percent, reversing a number of years of deficits. The change reflects the deterioration of the Italian economy rather than a change in its trading position.

Banking system problems have exacerbated the contraction. Italian banks are hamstrung by around €360 billion of bad or doubtful loans, which has exposed inadequate capital and reserves. Unlike counterparts in the UK and US, Italian banks have been unwilling or unable to tackle the asset quality problem. The most recent exercise to support banks (with a glorious title based on the Atlas) was under-funded and ill-conceived and did little more than support a few weaker banks at the expense of more solid enterprises.

This has constrained the supply of credit to the economy. Larger companies can use capital markets for finance, but this option is less available to small- and medium-sized enterprises that are crucial to employment and activity. Lack of credit availability and the deformation of Italy’s industrial structure will constrain any recovery.

Total real economy (government, household and business) debt is over 250 percent of GDP, up by 55 percent since 2007. This understates real liabilities as it ignores unfunded pension and health care obligations. While some recent pension reforms have been made, it will take time for these to have any material effect on obligations. Household debt is low, relative to peers. Italy’s net international investment is -32 percent of GDP, superior to Spain (-92 percent) and Portugal (-100 percent).

While the Eurozone debt crisis has been a factor, Italy’s problems are more fundamental with the economy having grown little since the introduction of the euro in 1999.

Labour markets, the legacy of the power of the Italian Communist Party in the post-war period, are rigid, with high labour costs and multiple barriers to hiring and firing workers. A long-running government scheme requires the state to pay laid-off workers up to 80 percent of their normal salary while their employer restructures. Productivity improvements are also slow.

Italy’s economy is increasingly unbalanced with high-end producers, such as those in luxury products and also advanced manufacturing, benefiting from demand from emerging markets. Other sectors, such as standard automobiles, domestic appliances and low-priced fabrics and clothes have found it difficult to compete with manufacturers based in emerging markets.

Domestic appliances, or white goods, exemplify Italy’s decline. In 2007, Italy, once a world leader in the sector, produced 24 million appliances. By 2012, it was down to 13 million; output of washing machines, dishwashers, refrigerators and cookers was down by 52 percent, 59 percent, 55 percent and 75 percent respectively. Italian manufacturers have shifted production to lower cost countries, resulting in job losses. This has increased the gap between the industrial North and the Mezzogiorno (the traditional term for the southern regions), which competes with emerging economies in price-sensitive sectors.

There are other structural problems. In World Bank studies, Italy ranks 45th out of 189 countries for ease of doing business. Infrastructure, dating back to the immediate post-World War II era, is in need of renewal and lags leading economies. Energy costs are high. Italy spends less than 5 percent of GDP on education, compared with a 6.3 percent average across the Organization for Economic Cooperation and Development (OECD) nations.

Italy’s large public sector and bureaucracy is legendary.  Tax and other revenues are around 46 percent of GDP. According to the World Bank, the effective Italian corporate tax burden is around 65 percent. The European average is around 41 percent, with only France (64 percent and Spain (58 percent) in a comparable range. Switzerland and Croatia, both located close to Italy, have tax rates of 29 percent and 20 percent respectively. This diverts investment away from Italy. There are around 100 new tax laws affecting businesses promulgated annually.

Italian business is not much better, dominated by a group of well-connected monopolistic or oligopolistic firms and, in the words of author Alan Friedman, “self-congratulating and self-perpetuating” dynasties. Complex corporate cross-holdings ensure that external disciplines are minimal and resistance to change is high.

Transparency International ranks Italy 61st out of 175 countries in perceived levels of public corruption, comparable to Romania, Greece and Bulgaria. The International Monetary Fund (IMF) considers bribery a serious problem. A number of prominent business figures are facing embezzlement charges as well as prosecutions for breaching regulations, highlighting the extent of the problem.

French GDP growth is anaemic, being mainly under 3 percent per annum since 1999. France’s GDP per capita has lost ground to many developed nations, such as the US and UK, over the last 20 years. Unemployment is over 10 percent, having remained above 7 percent for much of the last two decades. Youth unemployment is over 20 percent.

France’s current account moved into balance in 2015. But it has averaged deficits of around 1 percent of GDP in recent years, a reversal of small surpluses a decade ago. France’s share of the global export market has fallen by around 2.5 percent. It has also lost market share within the Eurozone. Industry’s share of GDP has fallen from 22 percent to 16 percent in the decade to 2010. Manufacturing has fallen to 11 percent of GDP, about the same as in Britain and far less than in Germany or Italy.

Total real economy (government, household and business) debt is around 280 percent of GDP, up by 66 percent since 2007. This understates real liabilities as it also ignores unfunded pension and health care obligations.

France’s budget has not been balanced in any year since 1974. French public debt is above $2.5 trillion, or 96 percent of GDP. The current budget deficit is around 3.5 percent of GDP and has been between 4 and 7 percent since 2009. France has repeatedly sought more time to meet the mandated European Union target of 3 percent. With a Gallic insouciance, Prime Minister Manuel Valls told legislators: “We are not asking. France makes its own decisions.”

In the World Economic Forum’s competitiveness rankings, it ranks 22nd, behind Germany (4th), and Britain (10th). In World Bank studies, France ranks 27th in terms of ease of doing business.

Labour costs are high and the market is inflexible. The labour code, which runs to over 3,800 pages, is complex and restrictive. A requirement for a firm with 50 or more employees to comply with obligations such as a works council mean that there are many firms with 49 or less employees, with corresponding loss of scale.

Welfare benefits are generous and zealously guarded. Modest reforms such as former president Nicolas Sarkozy’s attempt to increase minimum retirement age from 60 to 62 years have failed. The agricultural sector and national champions in automobiles, heavy engineering and aerospace enjoy explicit or implicit subsidies.

Overseeing this system is a large and multi-layered government sector, nicknamed mille-feuille for its resemblance to the sweet cream slice made of layer upon layer of paper-thin puff pastry. A 2010 book Absolument Debordee (Totally Snowed Under), penned by an anonymous local council official, described an inefficient and wasteful system. France has 90 civil servants per 1,000 inhabitants against 50 in Germany. The government employs 22 percent of the workforce, well above the European average. Perhaps, this merely reflects General Charles de Gaulle’s difficulty in ruling “a country with 265 different cheeses”.

The welfare system consumes 40 percent of public spending, while the remainder goes towards central and local government costs. While public expenditure is not necessarily unproductive, the evidence suggests that in health, education and vocational training, French spending does not match outcomes when measured against comparable countries. France’s public sector is now a deadweight loss, reducing economic growth.

A 2005 report on French public finances concluded that “each time a new problem has arisen in the past 25 years, our country has responded with more spending”. This accounts for the fact that irrespective of the economy or the government of the day, it has been difficult to control public spending.

Too big to fail…
Defenders argue that Italy and France are large modern nations, with enviable economic pedigree.

Italy and France are among the largest economies in the world. GDP per capita in 2015 is estimated at $35,000-43,000. They have large populations, well-educated and productive workforces, well developed infrastructure as well as considerable economic and social capital. Both countries are major agricultural and industrial powers, strong in advanced technical products, luxury goods, food processing, pharmaceuticals and fashion. Both are major exporters and significant tourist destinations. France even has a favourable demographic outlook, with a birth rate just above replacement level, mainly among its immigrant population. They are simply too large to fail.

Real GDP growth would need to be around twice the current projected rates to stabilise and then reduce government debt-to-GDP ratios. France and Italy cannot avoid a financial crisis in an environment of low growth and low inflation.

(This is the first in a two-part series)
Satyajit Das is a former banker. His latest book is A Banquet of Consequences (published in India and North America as The Age of Stagnation to avoid confusion as a cook book). He is also author of Extreme Money and Traders, Guns & Money

Tweets by @forbesindia
Affordable healthcare tech startups get backing from Mazumdar-Shaw, Healthquad
Can Kavin Mittal's Hike Messenger live up to its valuation?