Despite the fall of retail and the rise of casual wear, Vineyard Vines has quietly built a near-billion-dollar brand - without taking a cent of investment capital 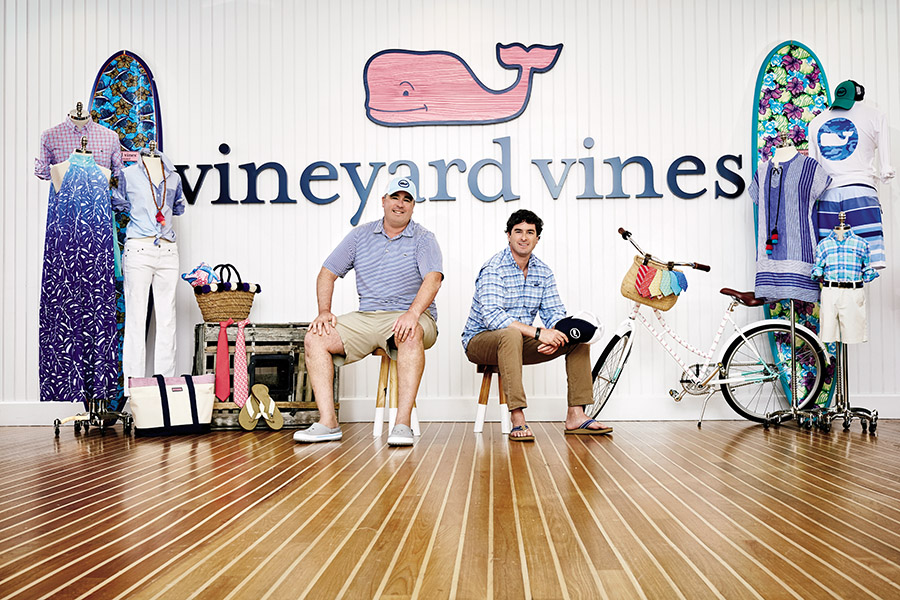 Shep and Ian Murray (right) say the iconic Vineyard Vines whale logo was inspired by a wooden carving done by their dad
Image: Jamel Toppin for Forbes
A tidy putting green with a pink smiling-whale logo greets guests at the Vineyard Vines headquarters in Stamford, Connecticut. The 90,000-plus-square-foot office also boasts a harbour-view patio and Tiki bar conference rooms. Seated next to his brother and co-founder Ian in one of those conference rooms, Shep Murray says, “My goal has always been to be a cross between Warren Buffett and Jimmy Buffett.”

Over the past 20 years, Shep and Ian Murray, 47 and 43, respectively, have built a business that would impress either Buffett. As clothing brands weather price wars, fast fashion, the decline of department stores and the explosion in online shopping, Vineyard Vines has thrived.

Founded in 1998, the company now has 95 stores, and sales of its colourful, whale-logoed shirts and neckties hit $476 million in 2016. Even more impressive, the Murrays have managed to scale while maintaining 100 percent ownership of the company, which Goldman Sachs reportedly valued at $1 billion two years ago. Given the turmoil in the retail sector, Vineyard Vines is probably worth slightly less today.

They’ve built the brand by being fashion’s feel-good guys. With more than 2,800 employees, Vineyard Vines makes clothing that’s classic but relaxed, preppy but not fussy. The company avoids edgy trends, celebrity models and fashion weeks. In one ad, a seaplane lands on turquoise water under the phrase ‘We don’t do runways’. “We couldn’t be glitzier than Bergdorf Goodman, and we couldn’t be tougher or more rugged than Patagonia. But we could be us—and we like to go to beach bars and have fun,” Ian explains.

So do its customers. “They struck a chord with a generation of shoppers when Ralph Lauren and Tommy Hilfiger lost momentum,” says Marshal Cohen, chief retail analyst at NPD Group. “It’s a lifestyle brand like Apple is a lifestyle brand—you buy their clothes, you commit to the whole portfolio.”

The vibe may be laid-back, but Shep and Ian are control freaks in flip-flops, tenaciously managing every aspect of the brand. “Our products are like jerseys that say you’re a member of the Vineyard Vines community,” Ian says.

Shunning mainstream chains and online resellers, the company sells gear through its own website, at specialty locations like resorts, pro shops and college bookstores, and in a growing empire of stand-alone stores. The Vineyard Vines headquarters has a model showroom where the Murrays obsess over every detail: The clothing on the shelves, the decorations on the wall, even the music on the speakers.

As other retailers shutter stores to focus on ecommerce, Vineyard Vines has been pushing harder into brick-and-mortar. Today 55 percent of sales come from stand-alone stores and 25 percent from ecommerce; wholesale, custom and licensing deals make up the rest. “If I don’t have a store on your street, you’re not going to think about us,” Shep says. “When we open a retail store, our online business goes up dramatically.”

Data collected from online orders provides a heat map for potential locations and has led to successes in landlocked towns like St. Louis and Kansas City. “Because of their full ownership, they have the nimbleness and mobility to do what they want,” says Cohen.

The desire to avoid outside interference was one reason they launched the company. In fact, they left corporate gigs—Shep at a marketing firm, Ian at a PR firm—to make ties precisely because they didn’t want to have to wear them. At first, they kept their day jobs as they planned their business.

Eventually the brothers quit their jobs and ran up $8,000 in credit card debt. They spent the summer of 1998 on Martha’s Vineyard selling ties in parking lots, on beaches and in bars. Later, they printed catalogues at Kinkos, placing ties directly on photocopiers. Unable to afford models, they photographed friends—a tradition they still follow.

Twenty years ago, as Silicon Valley casual wear spread east, the timing for a necktie business seemed awful. But the Murrays settled on a contrarian thesis: Yes, guys were wearing ties less often, but when they did, they wanted to make a statement. And neckwear had high margins and no sizing issues.

The brothers caught a break in 2002 when Aflac ordered a custom design featuring the company’s duck mascot. The Murrays faxed a mock-up and received a $400,000 order for 10,000 ties. When the $95,000 deposit cheque arrived, they ran out and bought a boat and then hustled to fill the order, bribing pals with pizza and beer to box the merchandise. The ties were, and still are, made by a domestic manufacturer in New York—making it easier to fill orders and control quality.

The company expanded beyond ties in 2004 and opened its first stand-alone store in 2005 on Martha’s Vineyard. More followed. And then the credit crisis hit. “For years it had been one big party,” Ian says. “The recession forced us to grow up.” Sales fell 35 percent, some clients cancelled orders, others couldn’t pay. With the company living cheque to cheque, survival hinged on efficiency. They invested in inventory- and data-management systems, renegotiated supply deals, built distribution centres and scooped up prime storefronts on the cheap. “The recession motivated us to invest in our own stores,” Ian says. The investments set up Vineyard Vines to ride the economic recovery.

The Murrays see the current retail turmoil as a similar opportunity. In addition to their push into physical stores, the Murrays are trying new things online. Last year they ceased most discounts and promotions to improve margins and maintain brand exclusivity. The move has slowed sales growth—expected to be up 5 percent to around $500 million in 2017—but with no shareholders or investors, the Murrays can experiment. They’re even pondering international expansion and brand extensions like resort-inspired furniture, beach-style restaurants and fishing charters. “What’s happening in retail right now is not an evolution,” Shep says. “It’s a revolution.”