In just four years, the 26-year-old has made a thriving business out of yoga with his startup Zorba which has 72 studios across 41 Indian cities 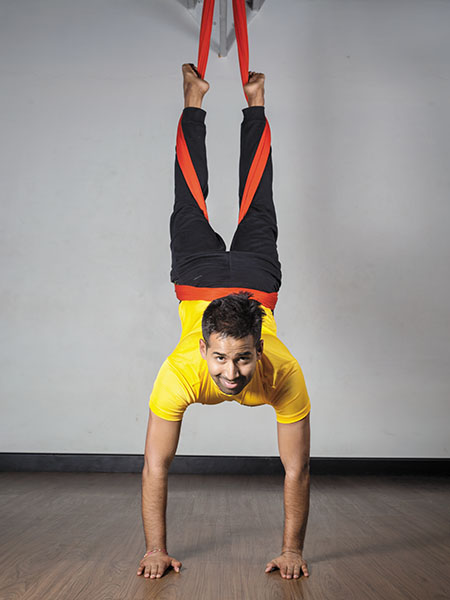 Sarvesh Shashi, founder and CEO, Zorba, set up his first studio in 2013
Photographs: Aditi Tailang
Sarvesh Shashi had his first run-in with yoga at the age of 17 when his father, Chennai-based businessman Shashi Kumar, urged him to take up a few classes that he had paid for but could not attend.

Little did Sarvesh, now 26, know that stepping in for his father and experiencing the benefits of the practice would transform him the way it did. Not just by leading to mental and physical wellness, but also by helping awaken the dormant entrepreneur in him. Nine years on, Sarvesh has established a chain of yoga studios, Zorba, across the country, giving yoga a contemporary twist.

Zorba, which in Greek means living each day to the fullest, operates 72 studios across 41 Indian cities. With a topline of $2 million, it claims to be the only chain of yoga studios in the country that offers 25 forms of yoga (including dance yoga and aqua yoga) to its customers comprising two-year-old tots to 90-year-olds.The company has 128 trainers specialising in the various forms of yoga offered at classes in artistically designed studios that look more like luxury spas than yoga studios.

Sarvesh’s father has had a significant role to play in encouraging his son to build his own business and subsequently scale it up. Shashi Kumar is the chairman of Sabari Group, whose business interests in India’s southern states range from distribution of consumer goods to real estate, textiles and fish exports. Sarvesh, who was always a fitness enthusiast (he played first division cricket), says before taking up yoga, he was “arrogant and ill-tempered”. But five years of rigorous yoga under the guidance of his mentor, Vijayendra, who Sarvesh refers to as guruji, helped him transform into a more grounded individual.

Meanwhile, at 21, Shashi, like most entrepreneur fathers, asked Sarvesh to join the family business. But Sarvesh, who had dropped out of Chennai’s Loyola College, was not interested. When asked what he would like to do instead, Sarvesh could only turn to yoga for an answer. His own life was the proof of concept he needed that there could be a market out there for the benefits yoga brings to individuals who work and live in a stressful environment, if it was packaged and marketed well.

“There are 500 million people in India under the age of 30 and I was wondering how can I attract them to yoga,” says Sarvesh. “If I tell an 18-year-old to try out hatha yoga, he would probably blow me off. But if I asked him to try paddleboat yoga in the water, along with Amy Jackson (Bollywood actor of British origin), he might think this is a fun thing to do.”

Sarvesh didn’t want his father’s capital when he started out, but in 2013, he asked for permission to start Zorba’s first studio on Chennai’s Mount Road in an empty warehouse that his company owned. He borrowed ₹16 lakh from an acquaintance to do up the premises and invest in branding and marketing, and roped in his guruji to invest ₹1 lakh and come on board as mentor. The venture broke even in four months, and Zorba opened its second outlet in Chennai in 2014 on a franchisee-owned company operated (FOCO) model; a third one was established on World Yoga Day in June 2015.

Zorba then went on to raise funding, which helped in its exponential growth. Sarvesh’s father had a role to play there as well. Shashi was reading about Flipkart’s eye-grabbing valuation in an economic daily and asked Sarvesh when he could expect to see his name in the papers for similar reasons.

This prompted Sarvesh to get his company valued. He approached Chennai-based investment advisory firm Dandekar Capital for the same. Incidentally, Dandekar Capital was advising Talwalkars Better Value Fitness for some strategic deals at the time. Consequently, Vignesh Shankar, then a director at Dandekar Capital, helped Zorba connect with Talwalkars. The senior management of Talwalkars visited Zorba’s studios in Chennai, liked the concept and Sarvesh’s vision, and in December 2015, agreed to pick up a stake in Zorba.

The deal with Talwalkars proved to be a game changer for Sarvesh’s fledgling startup and helped it go national. Talwalkars acquired a 50 percent stake in Zorba in exchange for $2 million in cash and the understanding that Zorba can set up its shop-in-shop studios at Talwalkars’ gyms across the country on preferential terms of lease. Out of Zorba’s 72 studios, 68 are located within Talwalkars’ facilities across the country. In addition to this, Zorba also leases out the gym floor at several fitness centres (within and outside Talwalkars) during non-peak hours to offer yoga classes.

Prashant Talwalkar, director of Talkwalkars, says the Zorba deal was strategic for his company because after growing to 200 locations across India, it was looking to expand into new areas within the fitness vertical. “Sarvesh comes with the mindset of a yoga trainer and we wanted to associate with someone who is as passionate about fitness as we are,” says Talwalkar. He agrees that several mom-and-pop yoga centres have sprung up across India, especially since public figures like Prime Minister Narendra Modi and yoga guru Baba Ramdev have popularised this form of exercise, but says that Zorba’s professionally qualified yoga instructors along with the variations it has devised such as yoga in the water and air, and basketball yoga have helped it attract a loyal clientele. As of December 2017, Zorba had 8,924 registered members. 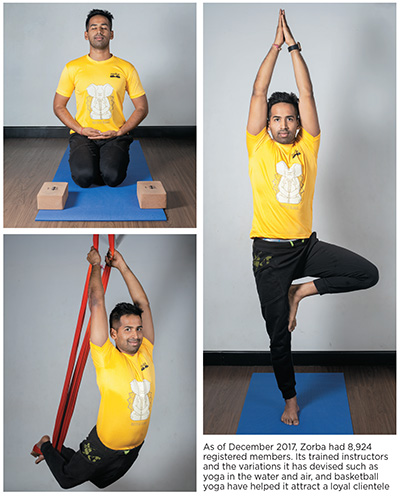 With the backing of an institutional player like Talwalkars, Zorba has trained its sights on rapid expansion, in India and overseas. The goal for FY19 is to have 150 studios in India and three to five overseas in cities like Singapore, Colombo and Dubai. Zorba has also branched out into merchandising—across apparel, food and music—and Sarvesh eventually expects around 30 percent of Zorba’s turnover to come from merchandise. The yoga chain is also exploring new formats and has tied up with actor-cum-host Malaika Arora to launch Diva Yoga, targeted at women.

Arora told Forbes India in an email that she was looking to undertake an initiative in the fitness space when she came across Zorba. “After a multitude of exploratory meetings and brainstorming sessions, we came up with Diva Yoga—a continuous transformational programme for women who would like to undergo lifestyle changes and transform themselves into divas who are physically, mentally, emotionally and holistically beautiful.” The new initiative, which will commence with a flagship studio later this year in the Mumbai suburb of Bandra (West), will see Arora take a few classes herself, says Sarvesh.

Talwalkar says his company is committed to investing additional resources into Zorba as and when required, but Sarvesh is also scouting for new investors. He wants to raise another $3 million and is looking at a substantially higher valuation than the one at which the deal with Talwalkars was struck. Zorba’s popularity thus far proves that what’s good for health can be good for business too.