Don’t Push, Just Steer is the Stein-Erik Vellan's advice to expat bosses. The MD of mobile operator Uninor should know. He once led Norway’s basketball team 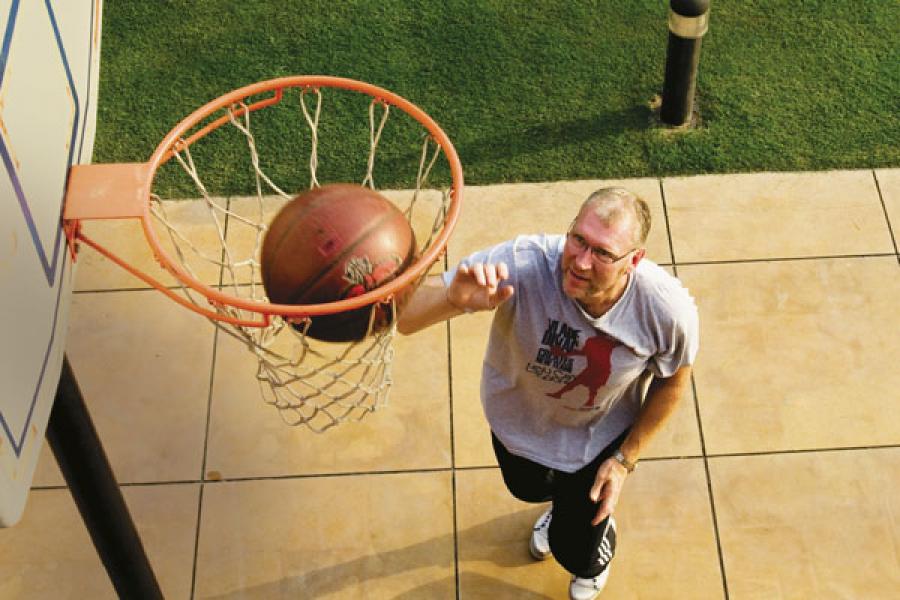 Every morning I try to get up two minutes earlier than I normally would. Some lovely peacocks stroll around my garden each morning and I want to see them. Every morning, without fail, they stop and take notice of me. They stare at me for a while and then flee in horror! This has become an everyday ritual — they are equally surprised to see me every freaking morning. When we came to India, my family and I were googling tigers and elephants and everything else about the country. But none of that prepared me for the peacocks — for me this has been a really pleasant surprise.

Twenty years and 20 kilos ago, I was the captain of the Norwegian basketball team. I travelled a lot with the national team of Norway for 11 years and saw different cultures mostly in the US and Europe. Later during my stint with Cap Gemini, I worked in Norway, Sweden and Paris. Then Telenor [the Norwegian company that acquired Uninor in 2008/2009] happened and I worked in Norway for a while, before I moved to Serbia for three years. Serbia is somewhat similar to India because they have a lot of migrant workers — 25 percent of Serbians live and work abroad.
India is the world’s largest democracy with 1.2 billion people.

So you have to think in terms of a different scale — that’s a big, big difference. After spending a month here, my son said India is fantastic. When I asked why, he said because here everyone is smiling. Indians live in a completely different way — they embrace all the different cultures and religions. In my world it works. In his world, he saw it in people that are open and smiling. A lot of European countries are a little bit more circumspect in that sense. They wouldn’t smile that much. There is a little bit more restraint. My children have not even once mentioned that they miss Norway. We went home during Christmas and they just wanted to get back to India. They certainly miss Serbia a little bit but that’s mainly because of friends.
It is easier to settle down in India compared to many other countries. Indians are very open. Some time ago my family and I went to a restaurant. We were sitting there when an older gentleman with his wife and his grandson and another couple came and sat down at the next table. We got talking. The next thing we knew was that he called us home for dinner the next day! We said it’s a little bit of a short notice but we ended up going. I had never seen them before. When you have that sort of hospitality, you should embrace it.

One day in India is like a week in Europe. The speed of things, change and development is very fast here. We moved into the Gurgaon office some time in August last year. And I almost don’t recognise the surroundings now. So many buildings have come up. Things are developing extremely fast in India.
Indians have a work ethic and a drive that I like a lot. When we had our first management meeting, I was thinking that I have to come up with detailed plans and set up the technical division, IT division, marketing, HR, communication, and sort of build on all the details. But I didn’t have to. Because the people here had already started work in these areas! Rather than trying to set the direction down to the details on the first day, we could lift ourselves because people had already done work. They came with prepared things that we could just discuss, debate, change or align. We are able to launch a mobile operation in seven-and-a-half months with that footprint — that’s a world record.

Indians are impatient. That’s a great thing. The drive of the people is already there so you don’t have to push. You have to steer. That’s management also. One part of management is to release energy and set direction. What I have seen in India is that you can focus more on setting direction because the energy is there. But impatience also means that the culture of standing in line and waiting for your turn doesn’t fit very well here. That is about the whole society’s impatience of getting forward. Trying to board and get off an airplane is different here. In my culture, we take a step back and let others get off first.
In a lot of other countries you have to be aware if people are actually fulfilling their tasks. If you give them a task, you have to follow it up — not to see the results but to see that people actually do it. Here you don’t have to worry about it at all. What I have learnt and seen in the organisation is that if the management is clear on the direction and vision, Indian business and society has a much stronger drive to reach these goals than in other countries. When we launched, within two-and-a-half to three weeks of operating, sales and marketing had ramped up to 1.2 million customers — it would have taken months elsewhere.
The Indian work ethic is relentless. Sometimes I have to tell people, “Please go home and spend an hour with your family and get a good night’s sleep because there is one thing I can guarantee you — when you are back in the office tomorrow, your work will still be there, it will not go away.” I tried very hard but in the end, I gave up. There was no way to convince people to go home. It was then I thought that it would be better to make people more comfortable at work. I altered my strategy. I extended the cafeteria hours, turned it free in the evenings and arranged for extra cars to take them home. In Norway everyone works from 8 to 4. You cannot ask them to stay beyond 4-4:30 unless it is something very urgent. Here the office is bustling all the time.

I have learnt that doing business in Patna is very different from, say, doing business in Chennai. That’s why we have empowered our EVP [executive vice president] who runs Bihar as we have the EVP running Chennai. Take a simple thing like advertising. Advertising in the Hindi belt has to be different from Chennai: You cannot rely as much on TV alone in Bihar, where it reaches 80 percent of the audience as [against] the South where it’s more than 95 percent. So you do much more of radio and out-of-home there.
(As told to Neelima Mahajan-Bansal)

Tweets by @forbesindia
The Lafarge Dilemma
Are Stock Recommendations Useful?